By Mike Zarnock
For the celebration of Hot Wheels 50th Anniversary in 2018, Mattel is pulling out all the stops! There will be a retro series of cars, new cars with 50th Anniversary logos, special cars within the mainline series, and exclusive cars for specific stores and hobby dealers. One of the most anticipated 50th Anniversary sets is the Black & Gold Collection. Featuring iconic Hot Wheels originals and classics from the 1960s, each car carries special livery and comes in a beautiful matching package that commemorates Hot Wheels’ golden anniversary. The card back shows six vehicles from the collection, while the front is decorated in black with gold accents and a gold line drawing of the car within the package.
One thing the packaging does not show is that there is a “chase car” with the set! Many of these exclusive sets have chase cars, and the only way collectors are able to find them is if they’re lucky enough to get to the series assortment when they open the package. The chase car does not have a series number in the upper right-hand corner like the others do, but the packaging is otherwise the same. The chase car is also produced in a much smaller quantity than the rest of the cars in the series (usually three or four cars in a shipment of 144), making it rare and hard to find—by design. 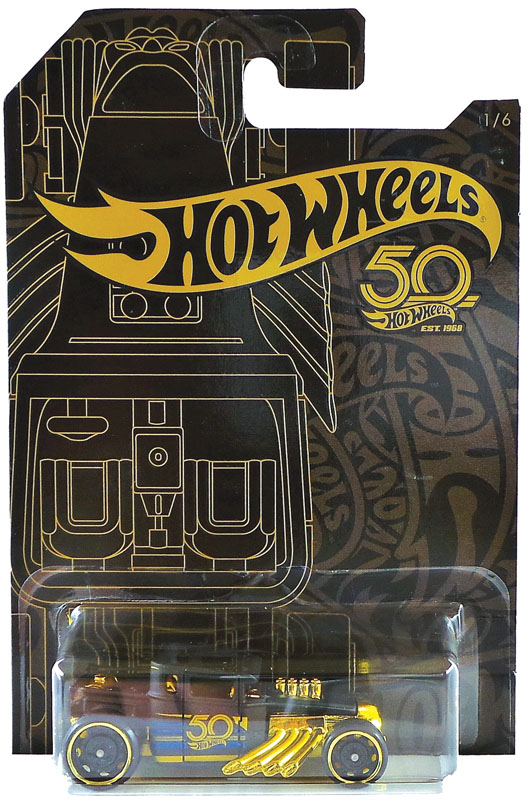 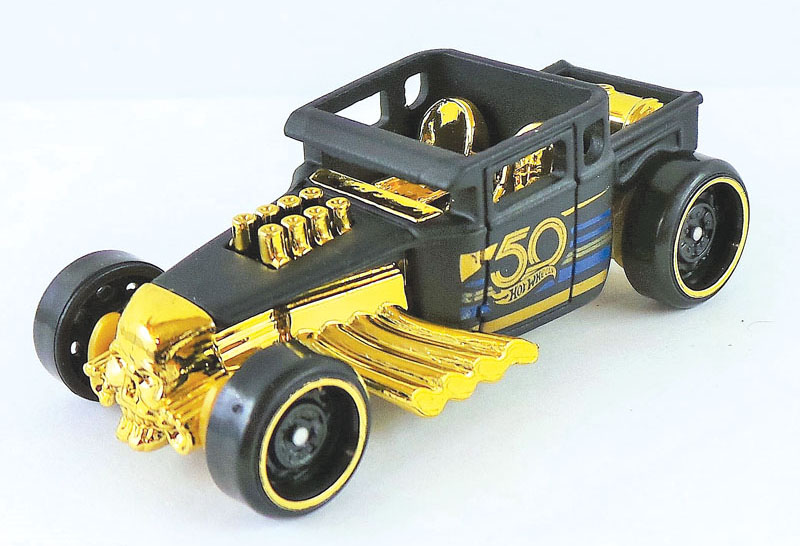 Starting the series off in the number one spot is one of the collectors’ most popular castings: the Larry Wood–designed Bone Shaker. They vary in degrees of flat to semigloss black paint on the metal body, and the only decoration is a blue and gold 50th Anniversary logo on its side. This Bone Shaker has a gold pearl plastic Malaysia base that rides on a set of black ST8 (steel 8-spoke) wheels with a gold chrome rim. 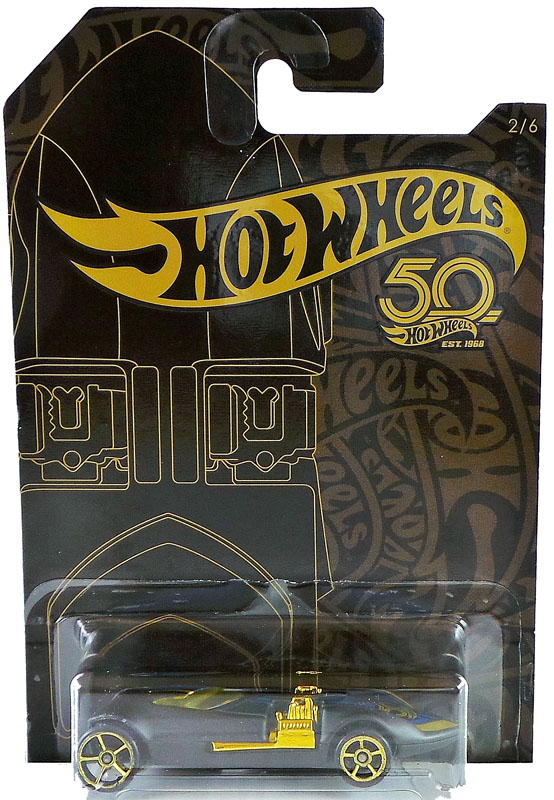 Number 2 is one of the most recognized Hot Wheels cars in history: the Twin Mill. Painted semigloss black with a flat black metal Malaysia base, the Twin Mill comes with a gold chrome interior and two blown Hemis up front. The window is a light yellow tint, and the tampos are dark blue and gold on the roof and hood. It rides on gold chrome OH5s (open-hole 5-spoke wheels). 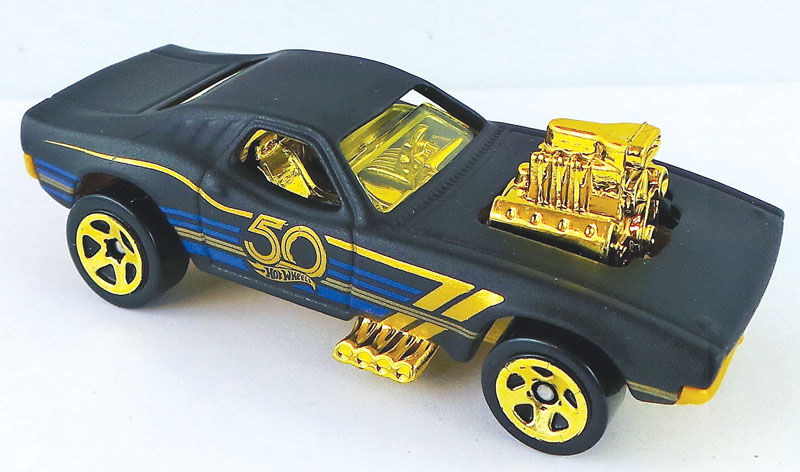 The Rodger Dodger is number 3 on our list and sports a large, menacing gold chrome supercharged Hemi engine sticking through the hood with matching Zoomie exhaust pipes exiting from behind the front wheels. It comes with a light yellow tinted window, gold chrome interior, and a gold pearl plastic Malaysia base. This Rodger Dodger has gold chrome 5-spoke wheels, is painted flat black, and has blue and gold “50th” tampos along the side. 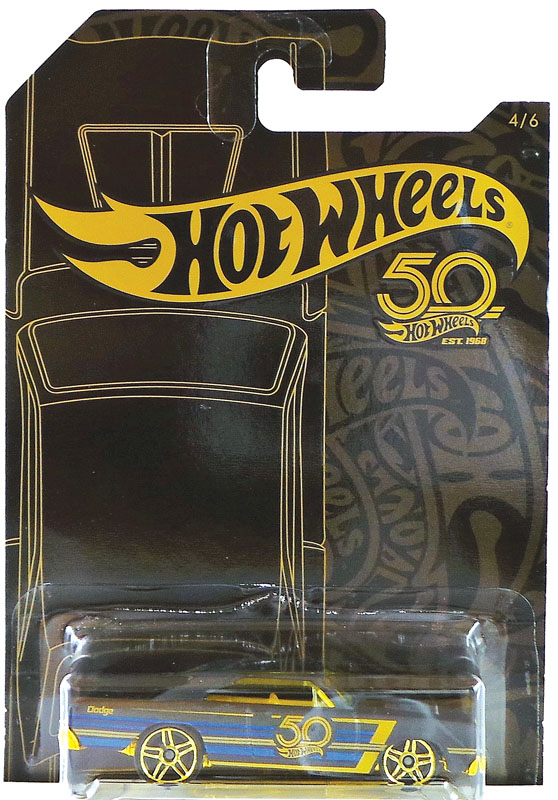 It seems that Hemi engines are a pattern with these 50th Anniversary cars. Number 4 is the ’68 Dodge Dart—a replica of the infamous 1968 Factory Hemi Dart Super Stock car. Painted flat black with blue and gold side tampos, it has a large air-gulping scoop on the hood and square-cut rear-wheel openings to clear drag slicks. The Dart has a gold plastic interior and light yellow tinted windows, a gold chrome Malaysia base, and light gold chrome PR5 (Phil Riehlman 5-spoke) wheels. 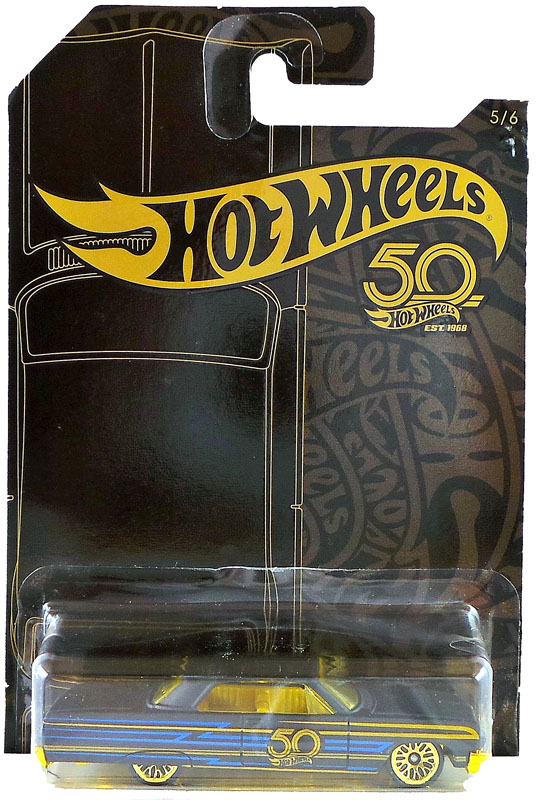 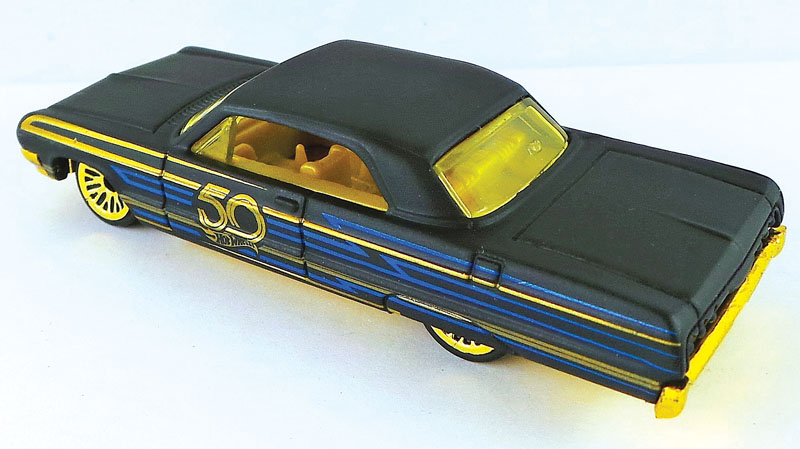 Cruising in at number 5 is the low and slow flat black ’64 Impala, with Anniversary decoration along the side. It has a gold plastic interior and light yellow tinted windows, and looks right at home rolling on gold chrome BBS-style wire wheels. 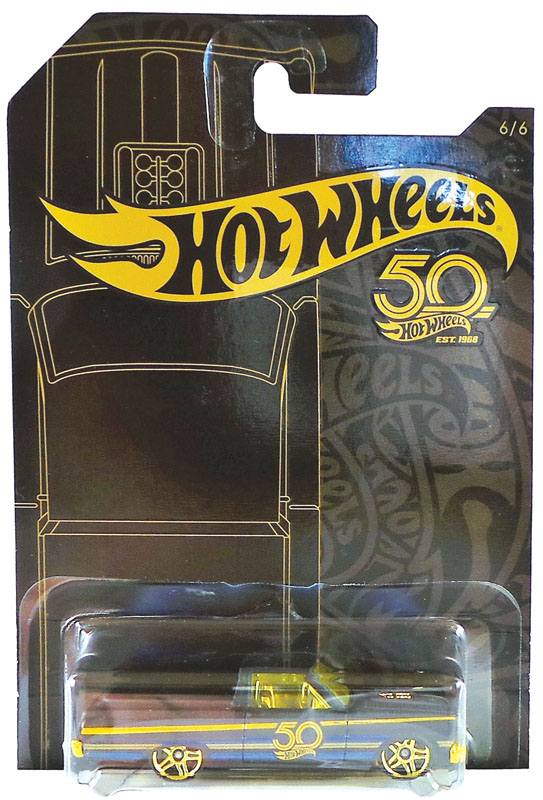 Rounding out the series is the ’65 Ford Ranchero, painted flat black with a gold pearl plastic Malaysia base riding on small gold chrome PR5 wheels. The front and rear bumpers are dark gold chrome, as is the grille. The interior is also gold chrome, and the windows are a light yellow tint, like others in the series. There is a hole in the hood for what looks like either Hilborn Injection or a double set of Ford inline 4-barrel carburetors. With the “50th” tampo along the side, it looks as if it could be a shop truck for Hot Wheels. 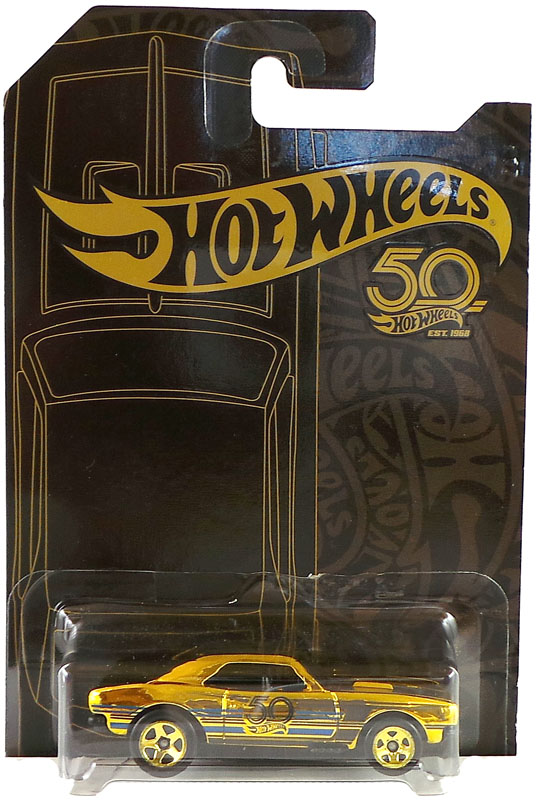 What about that chase car, you say? Well, it just so happens to be one of the all-time favorite castings from the very beginning of Hot Wheels. One of the original Sweet 16 cars that collectors had to have back then—and still have to have today—is the 1967 Camaro. The Camaro’s body is gold chrome with the 50th Anniversary logo on its side done in black and blue. It has a black interior with dark smoked windows, a metal Malaysia base that is painted semigloss black, and light gold chrome 5-spoke wheels. Make sure that you don’t pass up this gold Camaro when you see it because you may not see another one again!