For the past 10 years or so, during the month of December, through its hotwheelscollectors.com website, Mattel has been offering a complete Master Set of all its mainline Hot Wheels cars to the public for $549.99 plus shipping. They are offered in limited quantities; in past years, the quantity has been 500, then 700. For 2017, it was 900 sets, which sold out almost instantly. This is a great opportunity for collectors who absolutely have to have at least one of everything that’s released for the calendar year. $550 is a good chunk of change to shell out all at once for your collection, but for those who know what’s involved, it’s actually probably less expensive than what you’d spend chasing them down throughout the year—especially when you take into consideration the time and fuel it takes for who-knows-how-many trips to the stores you frequent. And of course, the number of cars that you purchase can be quite surprising, once you total it up at the end. Plus, consider hunting down the more difficult cars, like Super Treasure Hunts, ZAMAC cars, and all the store exclusives, and you will end up having to pay secondary-market prices for any that you don’t find. 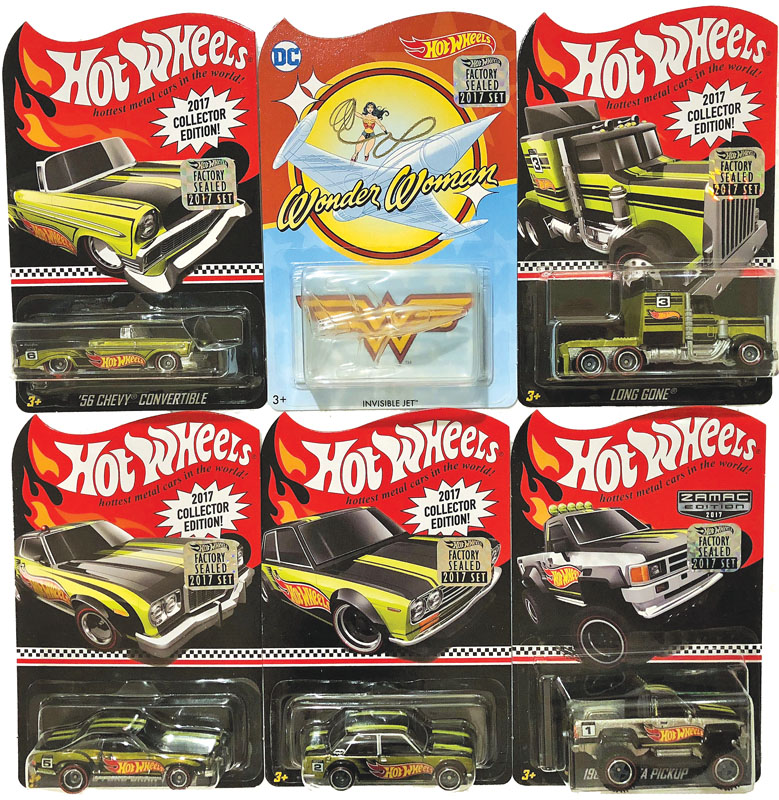 The sets have numbered from 444 to this year’s 456 vehicles. It includes the 30 Mainline Series collections, with 49 new models; 15 Treasure Hunts; 15 Super Treasure Hunts; 50 exclusive recolors (variations); and the 6 Hot Wheels Collectors Editions. As important to variation collectors as almost anything else is getting all the 50 exclusive recolors. Finding them all takes a lot of traveling or Internet time and associated shipping costs, unless you’re fortunate enough to have all those exclusive stores nearby. The stores that have the exclusive recolors are Kmart, Walmart, Target, Toys “R” Us, and the Kroger family of stores. In addition, each year, both Kmart and Toys “R” Us allow the collector to purchase 20 random vehicles from that store, mail in the cards along with the receipt, and receive a special Limited Edition vehicle. With the closing of some Kmart and Toys “R” Us stores in certain areas, it makes the opportunity obtain those exclusive mail-away offerings that more difficult.

Walmart dished up the 1987 Toyota 4X4 Pickup as one of its exclusives. 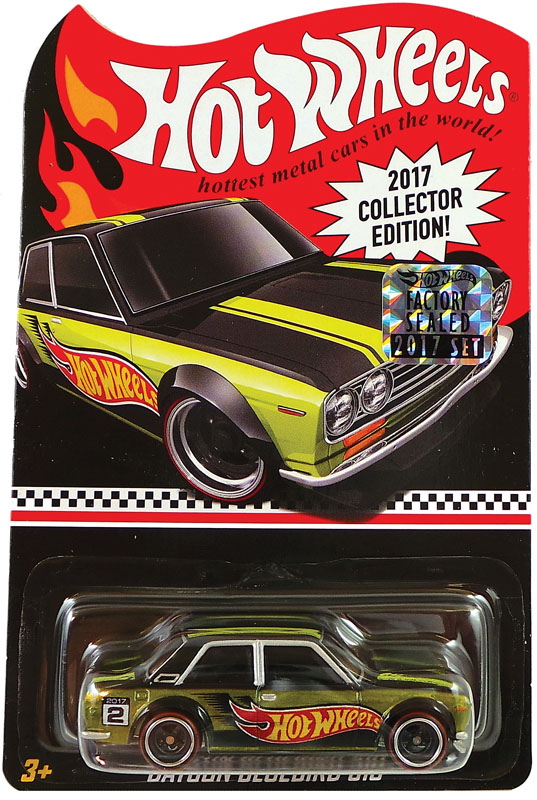 Kmart had three special promotions throughout the year. The first was this special Datsun Bluebird 510. 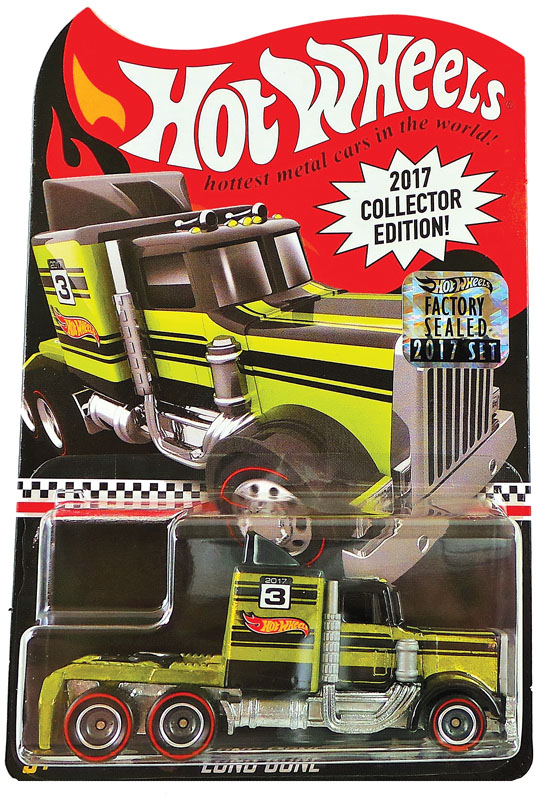 Toys “R” Us got in on the exclusive action with the Long Gone big-rig. 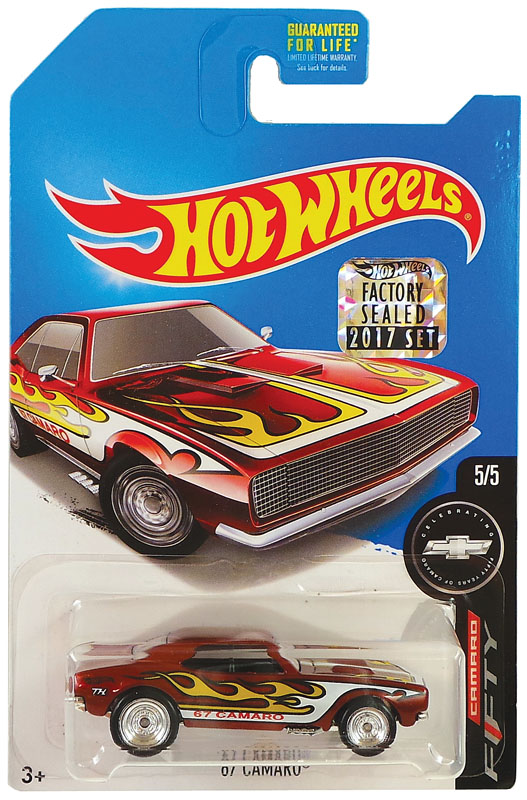 For 2017, there were three Limited Edition mail-away vehicles from Kmart—one for each of the Kmart Hot Wheels events. The February event was the Datsun Bluebird 510. For the September event, it was the ’76 Ford Gran Torino, and for November, it was the ’56 Chevy Convertible—all painted in a Spectraflame yellow with black accents and a large Hot Wheels logo on the side.
The Toys “R” Us mail-away vehicle is a reissue of the Long Shot casting that was absent from the Hot Wheels lineup for almost 30 years until it was brought back and renamed “Long Gone” for 2012. It was used four times from 2012 to 2014 and was brought back in 2017 for the Toys “R” Us promotion. The Long Gone is also painted Spectraflame yellow with black accents and has a Hot Wheels logo on the side of its sleeper compartment.
Walmart also participated in the mail-away game for 2017 with two separate promotions. The requirements for Walmart were a little different from the others, allowing you to purchase $20 worth of basic cars or multipacks. First up from Walmart is the rugged 1987 Toyota Pickup with huge rubber Redline knobby tires. It’s labeled “ZAMAC Edition,” and it, of course, is bar metal with yellow and black accents and a large Hot Wheels logo on its side. The second promotion from Walmart actually started as an April Fools’ Day gag for the 2010 San Diego Comic-Con, which then became a reality for this 2017 promotion. Wonder Woman’s Invisible Jet has an empty package with a card that shows Wonder Woman atop her invisible aircraft wielding her magical lasso! For some collectors, it was a must-have, while others scoffed at the idea. Either way, it was certainly unique.

And last but not least, there’s a large percentage of collectors who are always chasing after the Treasure Hunt and those elusive Super Treasure Hunt vehicles! Finding them in the stores is nearly impossible, leaving collectors to purchase these vehicles on the secondary market—some of which can go for upward of $20 to $30, or even more depending on the casting. In the Master Set, you get all 15 of the Treasure Hunt and all 15 of the Super Treasure Hunts, plus all those other basic cars that you may have missed throughout the year. In my opinion, this is a really easy way to have a well-rounded collection, and stashing away a mere $10 or $15 a week for the year is one of the best ways to make sure you don’t miss out.

Flashback Celebrating Hot Wheels 50th Anniversary with Black & Gold
For the celebration of Hot Wheels 50th Anniversary in 2018, Mattel is pulling out all the stops! There will be a retro series of cars, new cars with 50th Anniversary logos, special cars within the mainline series, and exclusive cars for specific stores and hobby dealers. One of the most anticipated 50th Anniversary sets is the Black & Gold Collection. Featuring iconic Hot Wheels originals and classics from the 1960s, each car carries special livery and comes in a beautiful matching package that commemorates Hot Wheels’ golden anniversary. The card back shows six vehicles from the collection, while the front is decorated in black with gold accents and a gold line drawing of the car within the package.
One thing the packaging does not show is that there is a “chase car” with the set! Many of these exclusive sets have chase cars, and the only way collectors are able to find them is if they’re lucky enough to get to the series assortment when they open the package. The chase car does not have a series number in the upper right-hand corner like the others do, but the packaging is otherwise the same. The chase car is also produced in a much smaller quantity than the rest of the cars in the series (usually three or four cars in a shipment of 144), making it rare and hard to find—by design.