Remember sitting at the kitchen table eating a bowl of sugar-coated breakfast goodness and pouring over every inch of that cereal box to see what kind of cool gadget you could beg your parent to send away for?

It was always the same scenario. First, you had to save up enough UPCs or coupons from the box. Then, you had to wait for your parent to write a check or go to the post office to get a money order and a stamp. And the worst part of it all was having to wait! It was always four to six weeks for the item to come in the mail. Why couldn’t the company just put the prize right there in the box instead of making an eight-year-old kid wait a lifetime for it to show up?

Kellogg’s Frosted Flakes was always one of my all-time favorite cereals—and still is, more than 50 years later. When the company put an offer for a special-edition Hot Wheels car on the box, I became a cereal-eatin’ fool! The cashier at the grocery store must have thought I was buying cereal for my neighborhood—kind of like the time there was a Hot Wheels Spam promotion and I filled the shopping cart with cans of Spam…and I don’t even like Spam!

Kellogg’s introduced Sugar Frosted Flakes in 1952, but in 1983, it decided to drop the word “sugar” from the name. Somewhere around the summer of 1985, Kellogg’s decided that it needed to offer an incentive to get parents to buy more boxes of Frosted Flakes for their kids. Drop the word “sugar” from one of Kellogg’s best-selling cereal brands for 30 years and it ends up needing a little sales help two years later? Coincidence or not, Kellogg’s loss became Hot Wheels collectors’ gain. 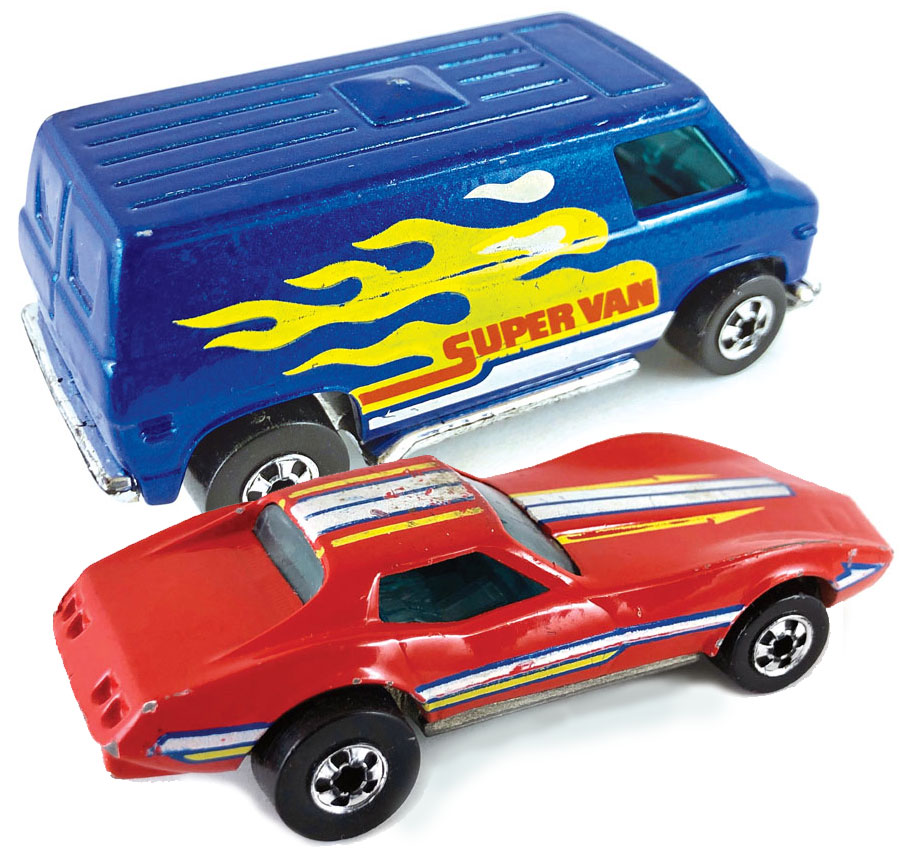 The Super Van and Corvette Stingray are classic castings that came with special paint and graphics as part of the Kellogg’s promotion.

There were three different castings that were available
from Kellogg’s in 1985 for this promotion. They were the Corvette Stingray, Super Van, and Turbo Streak.

The Corvette Stingray comes with a red-enamel-painted metal body and a bare metal chassis. The hood and roof have white stripes outlined in blue, with yellow stripes on each side. There are white and yellow stripes on the side, also outlined in blue. The windows and interior are tinted light blue, and the wheels are staggered with large rear and small front basic wheels—“Blackwalls” as they’re referred to by collectors. The Turbo Streak, like the Corvette Stingray, has a metal body and metal chassis. The body is painted yellow enamel, with a white, red, and blue design and the number “20” on the sides and on its nose. There were two different wheel variations for the Kellogg’s Turbo Streak car. The first—as shown on the cereal box—has basic wheels, and the other has gray hub Real Rider rubber tires. The Super Van has a metallic-blue-painted metal body but a chrome plastic chassis. The windshield and interior are molded together and are made out of blue-tinted transparent plastic. The sides of the van are decorated with yellow and white flames, with the words “Super Van” in bright orange lettering, along with a white stripe along the rocker panel. The wheels are the same as the other two vehicles, with them being large-in-the-rear-and-small-in-the-front Blackwalls. 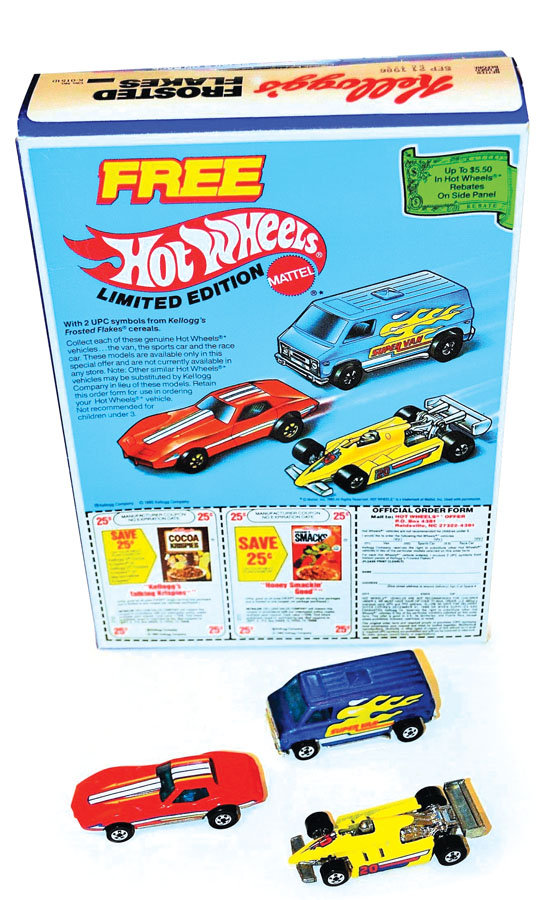 The promotion came on boxes of Frosted Flakes in 1985, and like many such promotions, you had to clip UPCs and mail away for your cars.

Interestingly, two versions of the Turbo Streak appeared in the Kellogg’s set. The standard-wheel version (far right) was shown on the cereal box, but some people received a car with Real Rider rubber tires.

If you still have your set from when it was released back in 1985, you are very lucky! If not, and you’re looking for a set in nice mint condition, expect to pay upward of $30 for a Super Van, $25 to $30 for the Corvette Stingray, and $20 for a basic-wheel Turbo Streak or $60 for one with Real Riders.