The 1957 Chevrolet Bel Air is one of the most iconic cars ever produced. With its period tail fins and protruding “Dagmar” bumperettes, the ’57 Chevy continues to be one of the most sought-after American classics, both by those who admire its original form and those who rebuild them as highly modified race cars. As with the majority of vehicles of the time, the ’57 came in a variety of configurations, but the most desirable are the two-door versions. The two-door hardtop and the two-door sedan were available in a plethora of options. 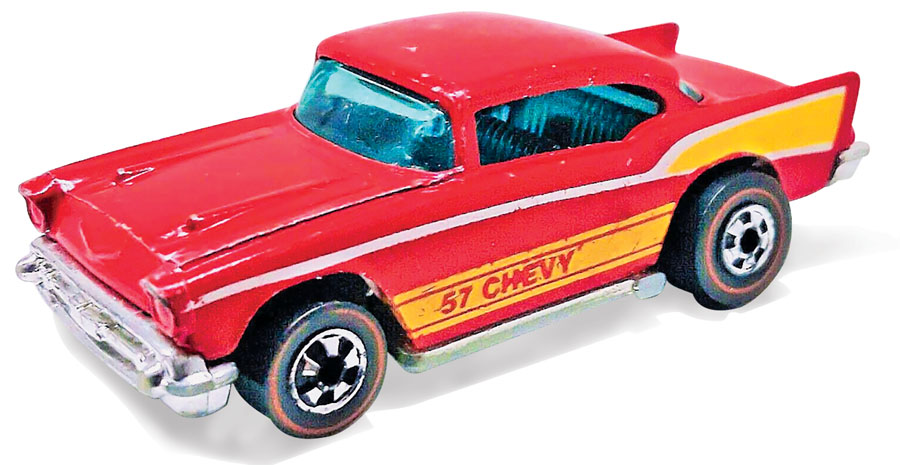 The first release of the ’57 Chevy came in 1977 with red enamel and Redline tires.

1978 saw the ’57 Chevy return in black enamel with Blackwall tires.

After a four-year hiatus, the ’57 Chevy was back in black for 1983—this time, with Gold Hot Ones wheels.

Mattel took full advantage of this popularity and released its first rendition of the ’57 Chevy in 1977 as the car was turning 20 years old. And if you didn’t already know, 1977 was the year that Mattel discontinued the Redline tires, so it produced Hot Wheels cars with either Redline or Blackwall tires that year. There was only one version of the ’57 Chevy produced with Redlines, and it was red enamel with a white-and-lemon-yellow side stripe replicating the famous factory side trim. It also had mustard yellow striping down low between the front—and rear—wheel openings. Its hood was flat and had a chrome plastic base embossed with its Hong Kong assembly location and a copyright date of 1976. There is also something very distinct about this casting that you may have noticed in the photos: The interior has always been molded as one unit along with the windows. If the windows were dark blue transparent, so were the seats. If the windows were smoked, so were the seats. Mattel did this with a few other castings as well, and this surely saved a lot in production costs at a time when it needed to save wherever possible. Discontinuing the Redlines saved them a penny a car, keeping the Hot Wheels line alive. The red enamel ’57 Chevy also came as a Blackwall version, the only difference being the wheels.

For 1978, a black enamel version was released with the same blue transparent windows and interior along with the same tampo decoration and Blackwall tires only. There wasn’t another release of the ’57 Chevy from Hot Wheels until four years later in 1982, when it was rereleased in the same scheme as in 1977 but with the new gold Hot Ones wheels. It was again released in 1983 but with red metallic—sometimes referred to as “metal-flake”—paint and again with the gold Hot Ones wheels. Its base country also changed from Hong Kong to Malaysia in 1983. 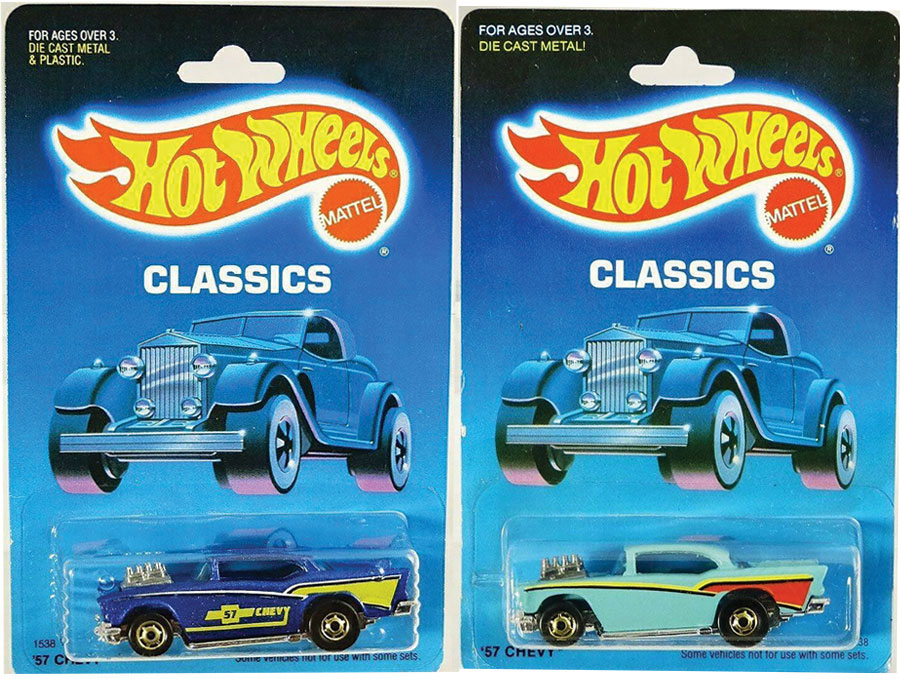 Left: The casting changed for the first time in 1984, adding an exposed metal engine along with new side tampos and Gold Hot Ones wheels. Right: 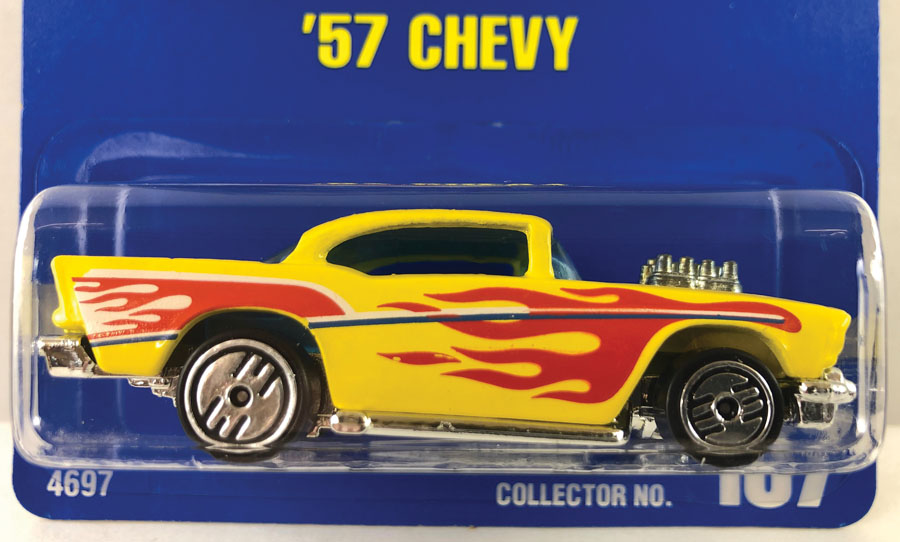 In 1984, the color as well as the casting itself changed. There was now a large metal Hillborn-type fuel-injected engine sticking through the hood, and the car was painted yellow enamel with red flames. This version came with either gold Hot Ones or basic-wheel Blackwalls. This color variation was again released seven years later in 1991, with Ultra Hot wheels with the collector number card 157, and again in 1992, on the same card with chrome Hot Ones wheels. All in all, the 1957 Chevy Bel Air has been released as a Hot Wheels car in many different variations from 1977 to the present, and as with its 1:1-scale inspiration, it continues to be one of the most popular American automobiles around in any scale.