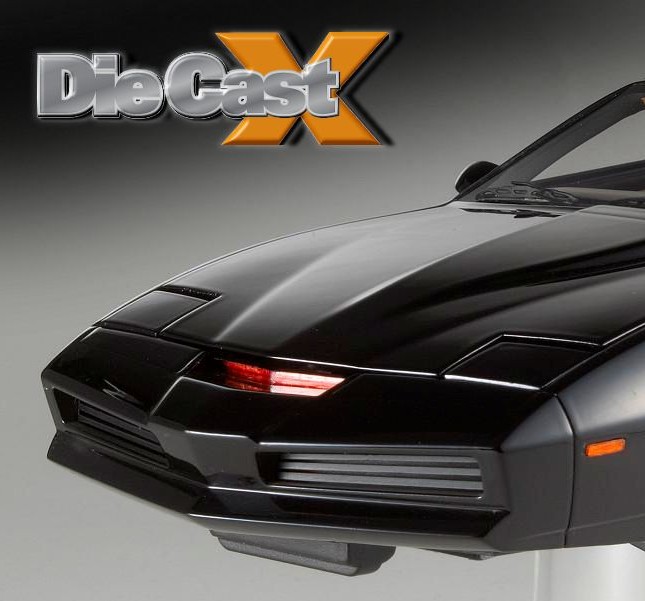 Hot Wheels Elite just sent along these photos of the first decorated  sample of their upcoming 1:18 Knight Industries “K.I.T.T.” – and suddenly it’s 1982, all over again.

Sorry if we wax nostalgic; for a lot of viewers, the “Knight Industries Two Thousand” – a hyper-hyped-up 1982 Pontiac Trans Am with built-in Artificial Intelligence and advanced crime-fighting hardware – was the TV Batmobile of the big-hair age.

Judging by the photos, it’s going to be an impressive piece, with opening doors, hood, and hatch, real-aspect door hinges (far cooler than the dog-legs prior images used), tilt-up T-tops, pop-up headlights, an extremely detailed, carpeted interior with tilting seats front and rear, and a heavily-piped engine that features hi-po tweaks, and even a few noble materials added for more realism (is that metal mesh on that big duct to the right of the induction unit?).

From the look of things, this one should be a major hit for star car collectors and model car lovers alike, with a hatful of sweet details throughout. Though these photos are of an early example, we’re willing to bet our Flock of Seagulls CD that it’ll look great in production – Hot Wheels’ Elite releases are uniformly well-finished and beautifully built.

No word on production numbers, or other features, but we’re locked in for more info – and a sample in hand – as they become available. Stay close to the little screen. We’re on the case.