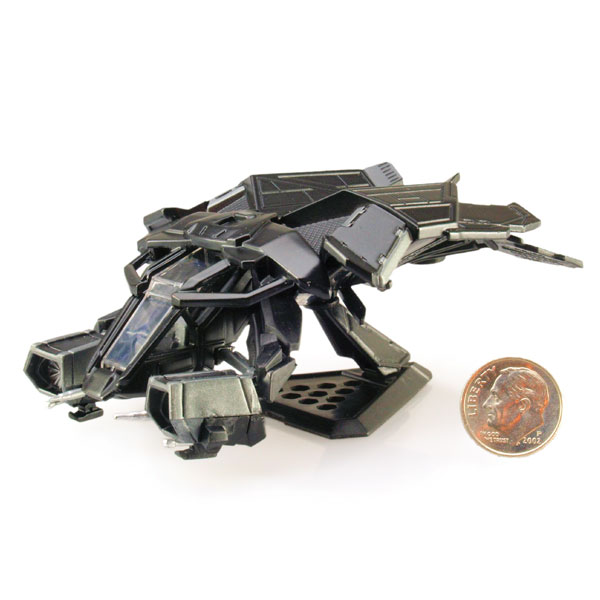 The latest film in the Batman Dark Knight trilogy was pretty dark, indeed. There were forced blood transfusions, fellows getting thrown from airplanes, and all kinds of horrific attacks on Gotham — all done at the behest of a villain who spoke through what appeared to be a re-purposed drive-in movie speaker. When he wasn’t being brutalized in a series of street-thug style beatings, Batman broke out some cool gear, and the largest toy was a heli-plane-jet-copter that Wayne Industries referred to simply as “The Bat.” Designed with the same stealthy, angular look as the “Tumbler” Batmobile, the machine was the star of some pretty hairy action segments in the film. Now it’s one of the latest releases from the Hot Wheels Elite “One” series in 1:50. Done entirely in well-cast plastic with sharply defined gray and black decos, the odd-looking thing comes permanently attached to a triangular display stand. Though there are no working features, the model does have every detail of the movie rig’s strange robot-cum-horseshoe crab looks in place, right down to the twin (but locked in place) propellers beneath, and a clear canopy and full cockpit up top. It’s inexpensive, but doesn’t look it (consider that high praise), and though it’s in an odd scale, if you were wincing every time a bad guy put a fist into our hero’s face, you’ll be adding one to your Bat shrine. — Joe Kelly, Jr.