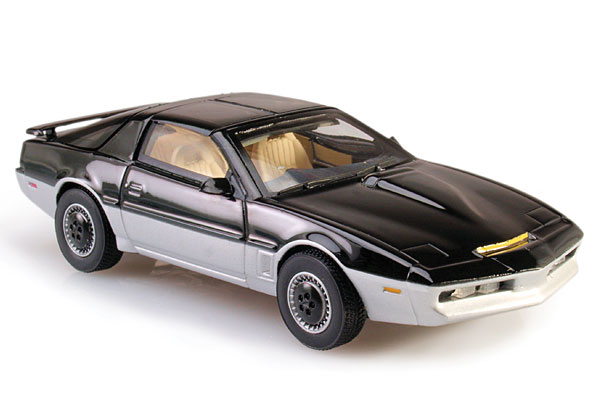 Before Michael Knight’s bad, black, cyber-Trans Am “K.I.T.T” took to fighting crime, there was “K.A.R.R.,” Knight Industries’ first – and decidedly flaky – prototype robotic car. Unlike its properly bolted-together sibling,  K.A.R.R. had a few screws loose (not to mention a couple of rogue circuits in its main processor), and was stashed safely away until a couple of bumbling thieves unwittingly set it loose. That made K.A.R.R. a menace — and a handy plot device which appeared in two episodes of Knight Rider: “Trust Doesn’t Rust,” and the tellingly titled “K.I.T.T. vs. K.A.R.R.” Here’s a spoiler, in case you missed it: K.I.T.T. wins.  Another winner is the 1:43 version of the bad seed Poncho as done by Hot Wheels Elite. The diecast body is heavy, smooth, and deco’d up correctly, with a silver grey treatment below the waist and a yellow, not red, scanner in its nose. We love the shape of the thing – HWE has finessed the car convincingly – and the butyrate glazing, crisp wheels and tires, and fully detailed interior make the car a piece that’ll fit nicely alongside even higher-end resin 1:43 models. The lensing up front, moderate (but nicely picked out) chassis detailing, and the smoked T-tops, rear glass, and taillights make the car an authentic piece that should engage adult collectors and younger fans alike.  –  Joe Kelly, Jr.