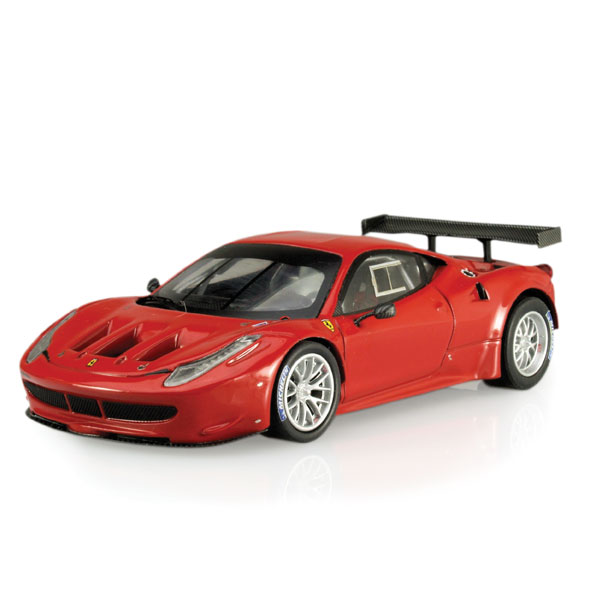 Two years after introducing the 458 Italia in 2009, Ferrari displayed the GT2 version, intended for the ACO’s Le Mans GT Championship series. After finishing second in class at Le Mans in 2011, 458 GT2s placed third at Sebring and won the Petit Le Mans event enroute to taking the 2011 LM GT Championship. 2012 saw one win its class at Le Mans, too. Hot Wheels Elite’s superb diecast model matches photos of an early test car perfectly; the revised front end with its fixed splitter and three big vents in the hood is exactly right. So are the small triangular inlets inboard of the lights and fender-top vents outside of them.  HWE’s paint is excellent and the mesh in those big vents is done with photo-etched pieces, as are the hood pins. The big rear wing has fine carbon fiber detail and there’s lots more of that in the interior along with a full roll cage, carbon fiber seat, printed belts with photo-etched hardware, and a bunch of detailed gauges.  The engine bay’s big carbon-fiber plenum, chassis braces, ducting, and barely visible red-headed V-8 all match photos too. Shiny ventilated disks rotate through calipers behind the very accurate wheels, and dimensions are right on 1:43 scale.   — Wayne Moyer