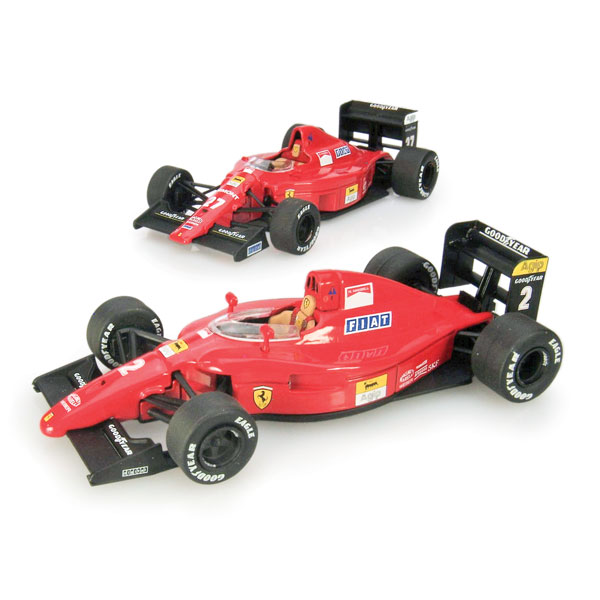 1989 World Champion Alain Prost moved to Ferrari for the 1990 season, bringing his Champion’s #1 with him, and relegating Nigel Mansell to the position of second driver. When the season started the only noticeable difference in the Ferrari F1-90, or 641, was a taller biplane rear wing replacing the 89’s triplane arrangement. Ferrari introduced the revised 641/2 at the third race of the season; it had a shorter, more rounded  duckbill  nose, a thicker front body (to permit larger fuel tanks), and smaller, higher radiator exit ducts. Hot Wheels Elite has released two very accurate F1-90 models, Mansell’s 4th-place Brazilian GP car and the 641/2 version he drove to win the later Portuguese Grand Prix. The shape and details of both models match 1990 photos and illustrate these changes very well. Both models have the 1990 yellow background for the Agip decal, and the Brazilian car correctly has no background behind the FIAT letters; the Portuguese version has an equally correct blue background, and the later version also has a correct, larger Goodyear logo on the rear wing. As with the F1-90 model, suspension details are accurate, as is the scale fidelity. Hot Wheels really did their research on these (no surprise, there, given the Ferrari license), and the models compare quite well to the Tameo kits built in the early 1990s — always a good thing.