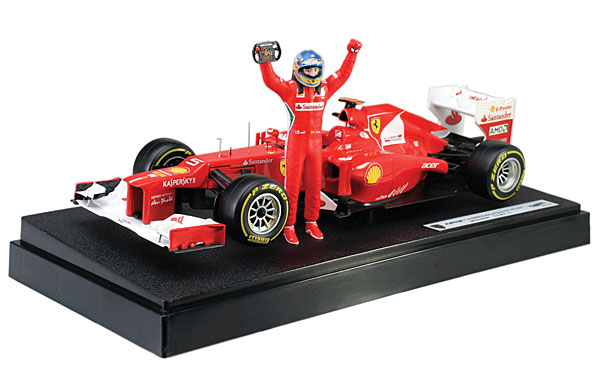 Balance is a critical element in racing, and for every yin, there’s a yang. That was the takeaway when Fernando Alonso took the Malaysian GP in March of 2012 from behind the wheel of a Ferrari F2012 — a car that had been roundly criticized for its lack of handling in dry conditions. That was the yin; when a light drizzle suddenly became a torrential storm (actually red flagging the race for a time), Alonso emerged from the pits on intermediate tires — and proceeded to yang the hell out of the likes of Lewis Hamilton, Kimi Raikkonen, Paul di Resta, and Michael Schumacher. It wasn’t all easy, but Alonso’s skill with the in-between rubber took him home a little over two seconds ahead of Sergio Perez in a Sauber-Ferrari. Judging from race-day photos, HWE’s done a great job of snap-shotting the livery on the car as it appeared that day; while one or two logos (Shell Oil being one of them) are done in high-quality, last-minute decals (isn’t licensing fun?), the majority of the deco above the car’s fine-flake metallic red is placed with great tampo strikes. The sealed body and all of its wild appendages look dead on, as do the wheels, carbon-toned suspension arms and Pirelli P Zero rubber — which might have looked better with some scuffing — forgivable on this pre-production sample. Even better, this special edition comes with a wee Fernando alongside. Some may find the rear wing a bit too thick — but why rain on this parade? F1 fans — especially those with Ferrari in their blood — rejoice.