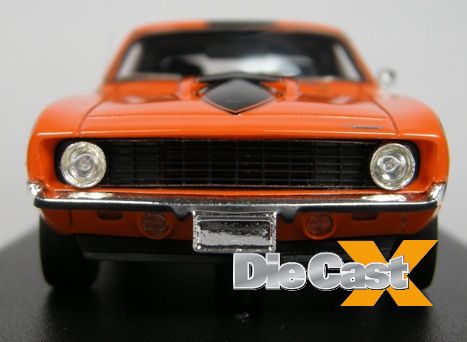 Things are going to get a lot more muscular in 1:43, thanks to a new line from those stalwarts of speed Highway 61. As seen in these factory photos of pre-production models, the resincast lineup will hit right from the heart of the era, and the chosen pieces look to be not only very well proportioned and painted, but decorated with some finely turned out trim bits around the windows and at their grilles and tails. Some of the supplied factory snaps were too small or too out of focus to reproduce here, but from what we see (or thought we saw), each rolls on chromed factory mags; interior detail seems to be right up there, too – and so does the chassis on the cars, rendered in deep castings.

We’re liking the models chosen for the line’s debut – a 1968 Dodge Dart in black or red, with bumblebee stripes, of course; a 1969 Ford Mustang Boss 302, tricked out in Acapulco Blue or Calypso Coral, and a perennial favorite in the collecting hobby, a 1969 Chevy Camaro, deco’d in an SS427 theme with sidepipes. That one will arrive – soon – in either Hugger Orange or Rallye Green.

Excited? Yes, we are. Highway 61 is calling the line “43rd Street”, and tooling models at Nuremberg included a 1957 Chevy, a ‘Cuda and a Challenger; we get the feeling that H61 – distributed through M&D International – will be working their way through the same successful series of screamers they’d marketed in 1:18 diecast. We also get the feeling that a lot of muscle collectors will want these on their shelves… us included. According to M&D, the MSRP is $79.99.

Keep an eye out. We’ll be following up with images of our own of the complete first wave – and some in-hand reviews, of course – in the coming weeks.