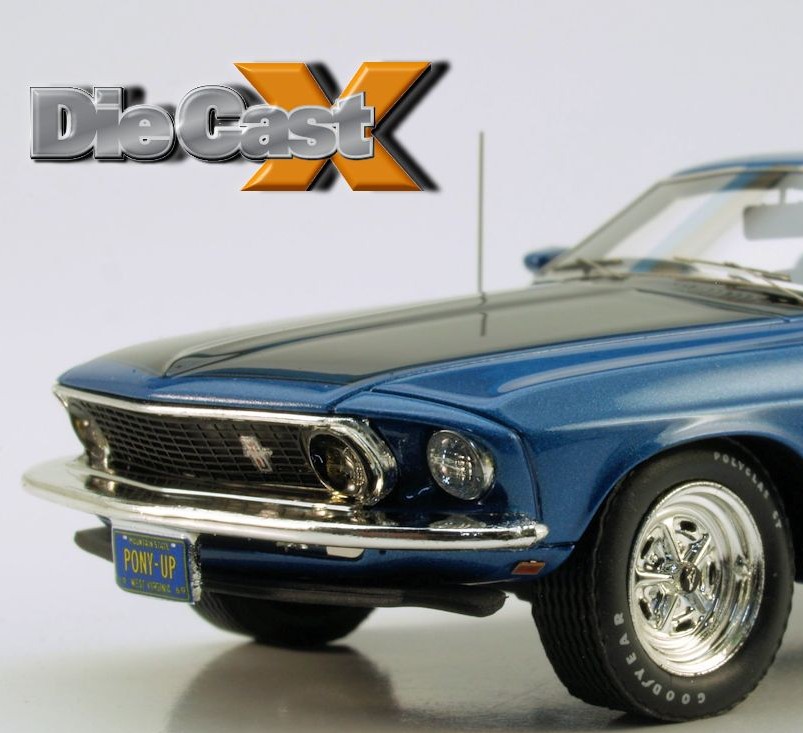 Highway 61 made the scene several years ago with American classics like the 1951/51 Studebaker, a Hudson Hornet, and even a Nash or three. In between, they also broke out very detailed 1:18 muscle, carrying the torch for the Ertl releases that had founded the hobby. That shouldn’t have been a surprise: the company’s president is Fred Ertl III, heir apparent to the family’s talent for slinging zinc alloy into beautiful, desirable shapes.

Now the company is moving forward with a new “43rd Street” line in 1:43 resin – and muscle fans who favor the smaller scale can prepare to get happy. This first car is a 1969 Ford Mustang Boss 302; Ford’s better-balanced small block racer for the street, that lent itself to road course track use far better than its heavier-nosed big block stablemates. They’ve done a great job, too. The casting is proportioned just right, with a smooth “Acapulco Blue Poly”, and save for a too-glossy hood and deck and missing blackouts around the headlights, it’s decorated very nicely, with photo-etched window surrounds and butyrate glazing. The wheels are brightly chromed, and wear “Good Year” rubber; a scale-thin antenna and separately-cast lenses front and rear round the model out very well. Interior detailing is full on, with a great dash and console, and neatly detailed steering wheel and door panels.

This pre-production sample is just a couple of tweaks shy of being spot on; maybe those wheels will get a shot of dull silver at their centers, and we’ll get some racoon-mask black detailing around those headlights when the car goes into manufacture. M&D International is the go-to for international sales, and for more info. Check them out.