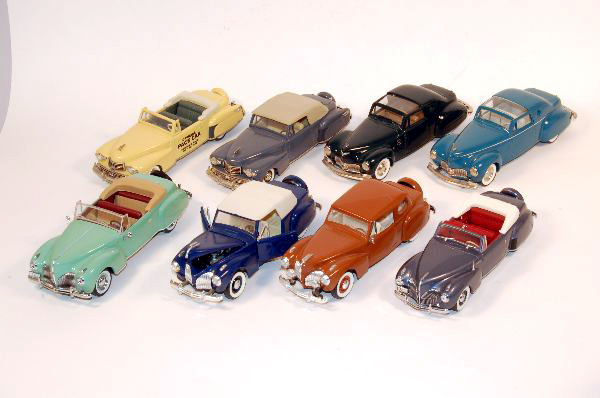 The Continental– note not Lincoln Continental – -began as Edsel Ford’s sketches for a “continental-looking” special, with a very long hood, short deck, and rear-mounted spare for his 1939 Florida vacation car.  Eugene “Bob” Gregorie worked with Edsel to develop a sectioned, lengthened (by a foot up front!) Lincoln Zephyr that met Edsel’s requirements while still retaining a Lincoln look.  The car was so popular with Edsel’s friends that the Continental was launched in 1940 as Ford’s prestige leader.  Edsel’s untimely death in 1943 and the end of Zephyr production (and its V-12 engine) spelled the end of the Continental after the 1948 model year.
A new Continental appeared in 1956: during an era when chrome was king the Continental Mk. II’s elegant simplicity earned it rave reviews and many awards, but the price – -five times that of a Ford- -discouraged buyers and production ended with the 1957 model.  In 1958 the “Lincoln Continental Mk. III”, now part of the Lincoln line instead of a separate marque, went from elegant simplicity to massive excess; the Mk. III, IV, and V were the largest Lincolns ever built and featured highly scalloped sides, canted headlights, reverse-slanted rear window, and a full load of chrome.  Fortunately, the next generation 1961-1969 Lincoln Continental (without a “Mark”) returned to clean, uncluttered lines.  Easily the best-known of these cars is the SS-100-X, the Hess & Eisenhart-built parade car for JFK.
Lincoln really confused the picture in 1969, dropping “Lincoln” from the name and introducing the “Continental Mk. III”.  While still sold by Lincoln dealers, the Mk. III was actually built on a 4-Door Thunderbird platform.  Continental Mk. IV and V models would follow, duplicating the numbers of the 1959 and 1960 cars.  It got worse in 1980, when the line included both “Lincoln Continental” and “Continental Mk. VI” models.  Then in 1986 it became “Lincoln Continental Mk. VI” again until the name was finally dropped in 2002.  With the current retro-styling craze, it’s not unlikely that we’ll see more Continentals.
Given that few Europeans had ever seen, much less owned, a first-generation Continental, it’s surprising that Mercury released a 1/43 scale Continental before World War II.  Photos indicate that it’s really crude by today’s standards and should be of interest only to toy collectors.  Rettig’s American Wheels lists 24 diecast and 9 more hand-built resin and white-metal models of the first generation Continental and I believe a couple more have been recently released.  Rio’s diecast models were very good for the 1970’s, with separate frame/chassis and full engine detail and they’re still readily available, but the model Minichamps made for Ford’s “100th Anniversary” set has a slight edge over Ixo’s recent release as the best diecast first-generation Continental on Highway 143.  In fact, it’s the best original Continental period.  The Ford version is hard to find but Minichamps’ standard version (different color) is available.  If, like me, you collect Pace Cars, Collector’s Classics made an Indy Pace car version of their 1946 model.  Brooklin’s white-metal models are very good, but Century’s version of Raymond Lowey’s customized 1946 Continental gets my vote for the best hand-crafted model.
Surprisingly enough, there are seven white-metal and resin hand-built models of the 1956-’57 second generation Continental Mk. II but only four diecast models.  Not surprisingly, the model made by Minichamps for Ford’s 100th collection is the best one you’ll find on Highway 143 and both Ford and standard versions are easy to find.  Brooklin’s relatively ancient (BRK 11a!) 1957 is attractive and accurate, and is the easiest white-metal or resin Mk. II to find— – and the best I’ve seen.
While the radically restyled 1958-1960 “Lincoln Continental” Mk. III, IV, and V outsold the classic Mark II (they were a LOT cheaper) not much attention was paid to them by residents of Highway 143.  There are only six hand-built models including three versions of the Mark III by Mini-Marque 43 and two Mark V’s by Legendary Motorcars.  Vitesse listed a diecast Mark III in their catalog but apparently it was never released, so there are no known diecasts of the third generation Continental.  I haven’t seen Legendary Motorcars limited-edition Mark V models, but it’s hard to imagine they could be better than Mini-Marque 43’s superb Mark IV.
It’s another story for the 1961-1969 Continental, though.  Tekno released a 1963 Continental in the mid-60’s and Dinky followed with a ’64 soon after.  These diecasts were either licensed to or copied by several other companies.  Franklin Mint added a 1961 and Minichamps has so far made two versions of the Kennedy SS-100 parade car.  American Wheels lists 14 diecast models and another nine hand-builts.  Those early Dinky and Tekno models aren’t bad at all, and can be found at very reasonable prices but once again Minichamps’ Kennedy Limo is the best diecast available, although it is a stretched version.  As of this writing it’s just been re-issued, too.  It’s a toss-up between Mini-Marque 43’s 1964 and Legendary Motorcars’ 1969 for the best white-metal model, but I’ll go with Legendary Motorcars superb model and rate it the best 4th-generation Continental model I’ve seen.
Later Continentals are few and far between on Highway 143.  Until recently Collector’s Mint pewter 1971, Western’s three hand-built 1976 Mk. IV models, and Yonezawa/Diapet’s slightly over-size 1977 diecasts were the only post-1969 models available.  But Neo has just released beautifully made and reasonably priced 1977 Mk. V Coupe and Sedan models and American Excellence (two lines by the same company) has a 1982 Town Car.  Watch for several more 1970’s Continentals from AE in the near future.  Certainly the most unusual Continental model of them all, and maybe the most rare is the 1979 “Continental Mk. V Pickup” made especially for Sinclair’s Auto Miniatures by Yonezawa/Diapet.
My figures show that at least 80 white-metal, resin, and diecast “Continental” and “Lincoln Continental” models have been made in 1/43 scale with more to come in the near future.  Excellent models of virtually all generations of Edsel’s dream car are either currently in production or easily found.  For those who enjoy the thrill of the hunt, the elusive Century model of Raymond Lowey’s custom “Connie” or that ultra-rare Mercury model are out there somewhere.  Happy hunting! 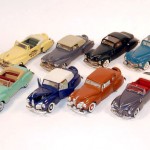 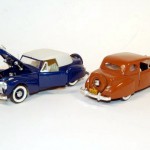 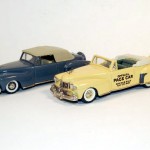 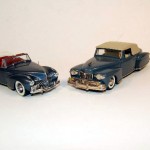 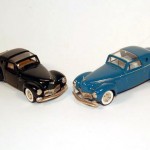 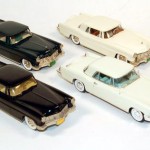 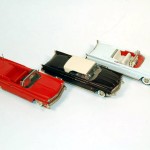 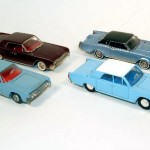 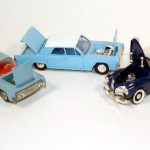 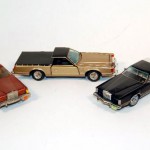 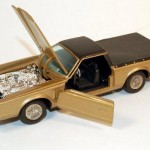 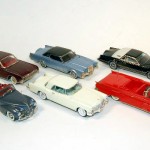