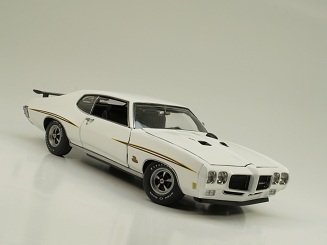 After pen-and-ink illustration passed away, but before the advent of computer- generated imaging, automobile ads featured carefully staged and shot photos of real cars. When Pontiac introduced the new-for-1970 GTO Judge, the car in those ads was a white Ram Air IV-powered Goat with all the bells and whistles the Judge package offered. That’s the car Acme has released as this 1970 “Promo GTO”, and it’s the latest take on a classic, high-end mold set. The features include opening doors, hood, and trunk, all on authentic hinges; a working, fully articulated suspension, a wired and piped 400-cube V8, and a carpeted, highly detailed cabin. The graphics and overall appearance (save the black hood-mounted tach, white on the real car) match the GTO in the original ad that’s reproduced in the box art. The ad reads: “After a few moments of respectful silence, you may turn the page.” You’ll want to spend more time than that with the model. It’s pretty cool. 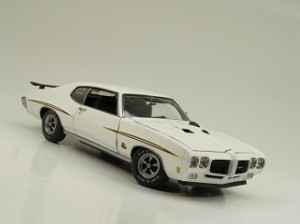