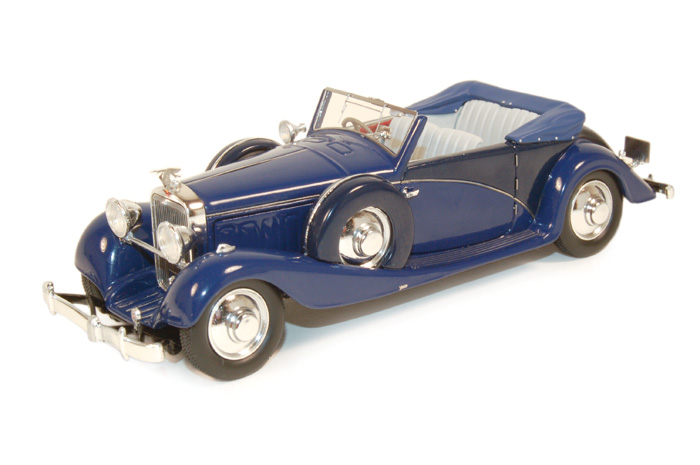 Hispano-Suizas were designed by Swiss engineer/designer Marc Birkigt and most were built in Spain (hence the name), but the most luxurious were built in a Paris suburb.  That’s the case with Birkigt’s final masterpiece, the V-12 powered J-12, which was sold only as a rolling chassis (for $12,000 1935 dollars!) which lucky buyers then took to their favorite coachbuilder. Chassis 14004 originally carrieda limousine body, which was soon replaced with a rather formal cabriolet body by Vanvooren. It still carried that coachwork, and photos show that Minichamps’ new resincast model is a very accurate miniature of the car as restored by Peter Mullin. Its smooth resin body has a very good two-tone blue finish with the separation line provided by an exceptionally thin bright printed chrome stripe. Every detail is there with excellent scale fidelity; even the boot cover snaps are pinpoints of chrome.  The tinyphoto-etched stork mascot and even smaller multi-color radiator badge are especially noteworthy. Interior detail is crucial in an open model, and Spark has done this one full justice with realistic upholstery,wood-grain dash and door sills, authentic instrument panel with seven detailed gauges, separate plated interior handles, and pedals, shift lever, and handbrake. Drivetrain and separate exhaust system components are picked out in at least four different metallic shades. —Wayne Moyer