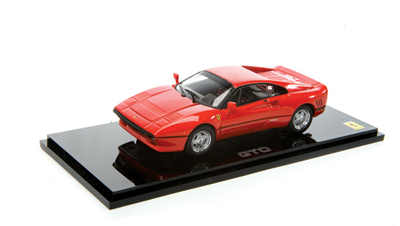 Despite recalling a name that holds a revered place in Ferrari history, the 1984-86 288 GTO is often overshadowed by its successor, the F40. There are several reasons for this. The car was originally developed as a homologation special to compete in a new Group B formula being developed by the FIA simultaneously for off-road rally and on-road sportscars. The Rally class inspired numerous entries, but only two manufacturers took up the challenge to develop sportscars — Ferrari and Porsche with its formidable 959 — so the on-road class was abandoned by the FIA, leaving the GTO as a racecar without a race.

The GTO is undenably handsome, but it shares much of its styling with its common contemporary the 308 GTB. Thus, even though it offered supercar performance and the exclusivity of only 272 examples being built, it takes an educated eye to spot one.

But that surface similarity masked the radical performance machine beneath. Much of the chassis, suspension and engine technology that propelled the F40 to legendary status was first developed for the GTO. The twin-turbo 2.9L V-8 was turned longitudinally with two huge intercoolers mounted on top. The 11.6 psi of boost was good for 400hp, plenty in a car that weighed a scant 2550 pounds.

This model is another in Kyosho’s premium 1:43 Ferrari series, and like previous examples, it is not just a body casting — it features an opening bonnet at the rear to reveal a detailed engine. It is impressive, with the distinctive twin-turbo/intercooled induction system being clearly recognizable. Any Ferrari enthusiast needs a model to mark this important step in supercar evolution.