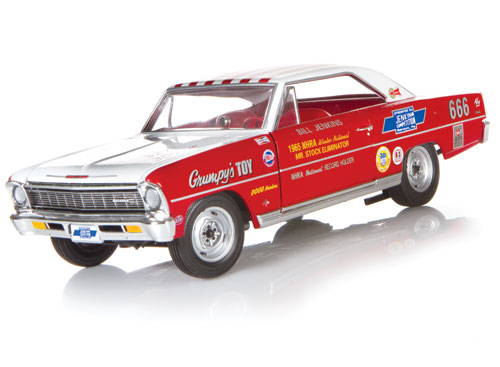 Snow White? Not even close. But this fairy tale—about a wonderful little L79 Chevy II Nova that went to live with a guy named “Grumpy”—had a happy ending for race fans who appreciate a knockout punch delivered in a bow tie.
Bill “Grumpy” Jenkins left Cornell University, where he was studying Mechanical Engineering, to help run the family farm. But it wasn’t long before he’d developed a thriving sideline business building and supplying drag racing engines for the local hot shoes. Within his first few years, he’d wrenched on 30 cars that had become national record holders, and in the process, Jenkins himself became an East Coast drag racing icon. Anyone could make big blocks honk—but Bill Jenkins made small blocks sing.
Jenkins’ personal hit parade began when he laid eyes on an L79 Chevy II Nova. Realizing that cubic inches were great, but power-to-weight ratios won races, the Grump reasoned that running the lightweight but powerful 350-horse Chevy II against larger, more powerful cars might be a winning proposition. That first “Grumpy’s Toy” Nova was painted red and white – and it blew by the competition, setting East Coast drag racing on its ear. A small-block-powered Chevy II beating almost every Mopar Hemi was the stuff that got crowds into the stands, and the Grumpy name soon spread nationally. The red car ultimately lost—to a towing accident—but it donated its still-viable internals to a second Nova, the all-white “Grumpy’s Toy II,” that ran in the Super Stock/C class into 1967 with continued success.
Jenkins went on to build a succession of Camaro, Vega and Monza “Grumpy’s Toys” to compete in match races and various NHRA and AHRA classes. He also worked with Jack Hart at NHRA to develop the class that came to be Pro Stock. Jenkins retired from driving in 1976, passing that responsibility over to Larry Lombardo and Ken Dondero, so he could focus on the engineering and engine building part of his enterprise. Twenty years later, he was inducted into the NHRA’s “Top 50 Drag Racing Drivers of All Time,” taking home a number eight ranking.
Auto World acquired Ertl’s tooling for the 1966 Chevy II Nova, and it has worked with Supercar Collectibles to bring out those first two history-making cars. Grumpy’s Toys I & II both wear crisp, accurate graphics, and Supercar has added the necessary tweaks to the stock mold set, hammering in a tach, headers, a double-pumper Holley four-barrel carburetor with a velocity stack, plus traction bars and scuffed slicks on stock, silver-painted steel wheels. Inside, the cars have correct bench seats, and on these versions, the mouse motor gets wired and plumbed, and even sports additional paint detailing on its parts. As they did on the real cars, the tweaks have really paid off, and the added details make the models all the more authentic; though made of the same dogleg-hinged Ertl tool as the street L79 model, these are respectable mementos of one of the greatest drag racers.
They’ll also be remembered as the last models to be authorized by the man himself. Shortly after approving the designs and signing the licensing papers for their manufacture, Bill “Grumpy” Jenkins passed away on March 29, 2012. Bill will be missed by drag racing fans for the innovation and direction that he brought to the sport, and by scale collectors for the colorful models of his historic cars that he worked so hard to present in all their glory. Godspeed, Grumpy.