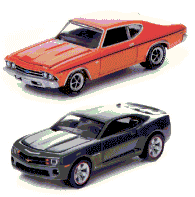 GL Muscle is hitting the gym early this year, packing on some serious muscle as its 4th release fast approaches. This line-up is jam-packed full of horsepower featuring cars that ruled the streets then and now!

Series 4 begins with the classic 1969 Chevrolet Chevelle, “America’s most popular mid-sized car.” To its side are the 1967 Shelby GT500 in white with blue racing stripes, the historical 1970 Chevrolet C-10 Truck and the 1971 Chevrolet Camaro SS. This series is rounded out by the new 2012 Ford Mustang GT and the 2011 Chevrolet Camaro – Synergy Series – featured at SEMA.