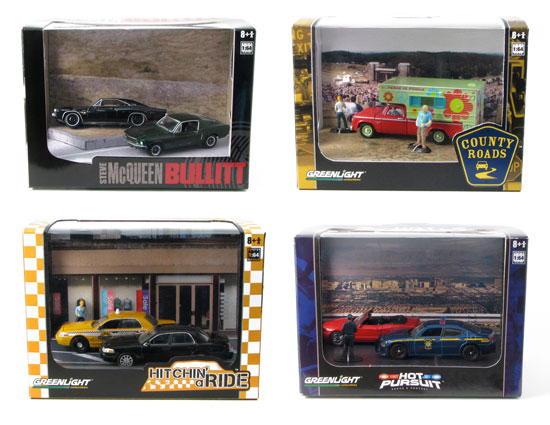 Hot on the heels of GreenLights sold-out 1:64–scale diorama series, the progressive diecast maker is about to release a second group. GreenLights team expects these four new selections will be as popular as its Series 1 sets. If you were impressed by the first wave of 1:64 dioramas, then Series 2 will blow you away! says Jeff Nelson, national sales manager. Series 2 is composed of four different scenes including a new Bullitt (with Mustang and Charger), Hot Pursuit (with Hemi Charger and Mustang GT), County Roads (Dodge camper) and a brand-new theme, Hitchin a Ride (a Crown Vic and taxi).

The revised Bullitt scene features the two famous cars later in the chase scene just as the crash occurscomplete with scrapes and bullet holes in both cars. This is likely to be the most sought-after set. County Roads captures the spirit of Woodstock with the camper painted with peace signs and flowers.  Hot Pursuit is a 2010 Mustang GT Convertible being pulled over by a Nevada Highway Patrol Dodge Charger, while Hitchin a Ride features the very first taxis made by GreenLight.

All of these replicas have opening hoods, detailed engines, real rubber tires, metal body and chassis, detailed graphics and custom license plates. Each scene will vary in production quantities ranging from 2,500 to 8,000. This release will be available in May at Toys R Us, Kmart, Meijer and hobby shops as well as through online dealers.