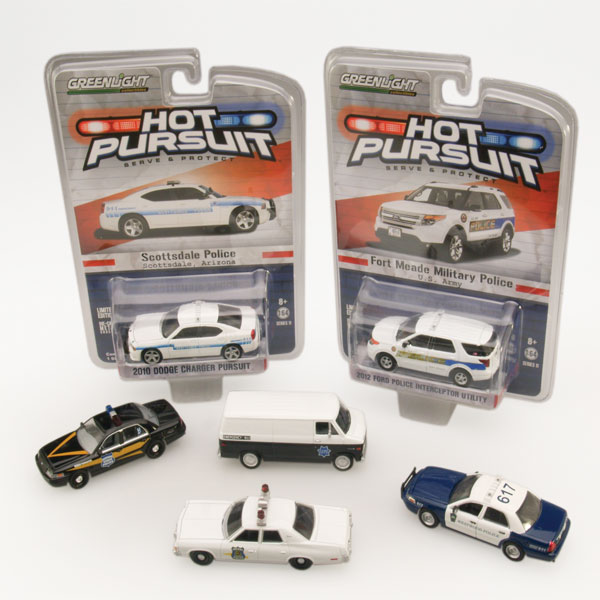 It’s nice to know that someone’s looking out for you — unless you’re a bad guy, of course. GreenLight is continuing a celebration of the folks who wear the shield with release 11 of their “Hot Pursuit” collection. Once again, these pinpoint-accurate little cruisers are a mix taken from different counties and towns, with this selection sporting an army base piece, for good measure. Two Crown Victorias — one hailing from Westwood, MA, and the other a trooper’s ride from the Indiana State Police — join a ‘77 Dodge Royal Monaco, also from the ISP, a 2010 “Scottsdale, Arizona” Dodge Charger, a 1977 Chevy G20 from San Francisco, and a 2012 Ford Police Interceptor Utility — a heavy duty Explorer — in Fort Meade Military Police deco. The Indianapolis Crown Vic — tagged as a 2008 model — is the “Tenth Anniversary” chase piece, acknowledging GreenLight’s decade of making model cars, but each of the models, with their immaculate paint and decorations, are worth chasing down. And yes, you may make “woot-woot” siren sounds while doing so. We won’t tell a soul. — DCX Staff