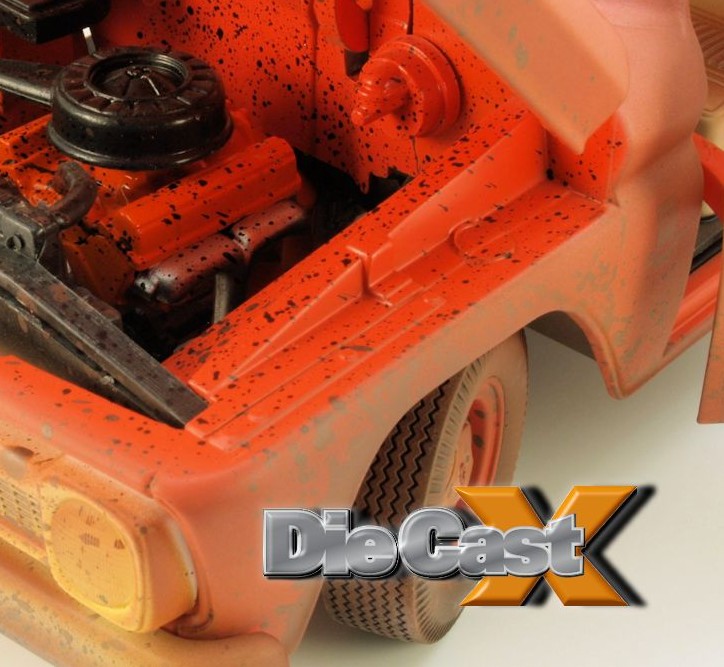 Okay, here’s the checklist: She’s a hottie. She likes to ride motorcycles. She drives a beat up old Chevy pickup truck. And, as seen in the Twilight series of films, she also has a thing for bloodsuckers. Hey, three out of four ain’t bad. While we can’t attest to character “Bella’s” taste in men, we can definitely get behind item number three, as seen in this release by GreenLight Collectibles, arriving just in time for the latest installment of the fanatically-followed movies.

Based off a Sun Star mold set, this model of the movie vamp-in-training’s Chevy truck is painted and deco’d up to look like it’s been ridden hard and put away muddy (or something that rhymes with muddy). The airbrush-applied weathering is everywhere, including the moderately detailed interior and on the grease-spattered old Chevy V8 under the hood. The wheels steer, and the tailgate opens on the pickup’s rear (we’re assuming a stake bed would have been a no-no), making it a great place to stash those plastic glow-in-the-dark fangs you’ve been hiding. Yes,  it’s a ’65, and Bella’s truck is a ’63, which makes for some differences in the side trim; if you’re a movie fan with a thing for brunettes who consort with the undead, you’ve already bought in. Got a teen-aged daughter (or youthful wife or partner) you want to give chills to? Here you go.