Joe Kelly Jr.
From the Magazine 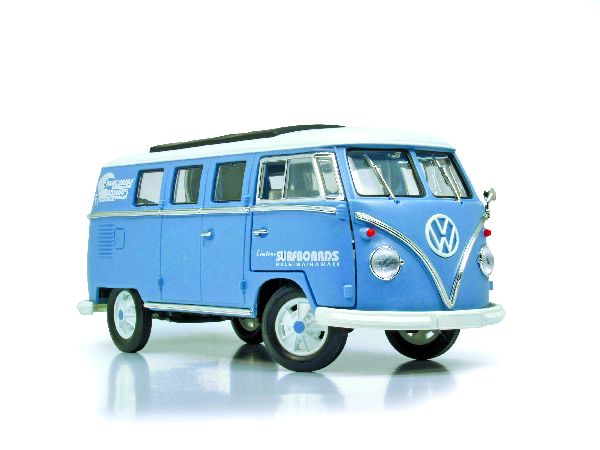 Every hobby needs an entry point, and for a lot of collectors over the years, that portal into diecast has been low-cost offerings like those from GreenLight Collectibles. The company started out in 1:64, and still makes some of the better mass-market diecast cars in that scale. But it’s also true that they’ve gotten adept at working with other mediums, other scales, and occasionally, with other companies’ molds.
That’s the case with this pair of surf-themed VWs. One is a 1962 Microbus done up as a company van for “Beachbum Boards” and the other a 1967 VW Beetle in a custom bright orange and white two tone. Like another recent 1:18 GreenLight release, the “Mecum Sold” 1965 Shelby Daytona Coupe, both of these Volkswagen molds came by way of Yat Ming’s old lineup. And like that model, they look a whole lot better here than they ever did back then, mostly because of upgraded paint, chrome and assembly, all of which clock in at a couple of points north of what those old releases wore. The nuts and bolts haven’t changed: the bus has opening doors and rear deck hatch, all on dog-leg hinges; the side doors on the Transporter (called barn doors on these particular buses) are cast shut, as is the engine cover over the rear bumper. That’s a bit of a bummer, but no deal breaker in this segment. Weight freaks will note that the bus is also heavy, thanks to the serious amount of metal it’s sporting in its thick, matte blue-painted body shell. For a budget-level bomb, this little rolling surf hut has some neat exterior detailing, especially in the chrome trim around the windows and beltline. Everything’s nicely engraved, plated, or painted, and the big, sharply etched headlights each seem to have a bulb beneath their covers. Out back, the taillights have been detail painted with amber over red, inside a tidy chrome frame.
The Beetle offers up a little more, feature wise, with opening doors, hood, and engine cover, and the glossy Hebmuller-style two-tone paint is sharp where the colors break. The finish is decorated with nicely turned-out trim bits for the handles and the chrome strip on the hood; the windshield and back light have creditable frames that fit the casting fairly well. Like the bus, this one’s got good lensing front and rear—a lot better looking than we remember seeing on the old peg-in-a-hole Yattie versions from a few years back. Open the engine cover, and the little flat four’s been detail painted with silver; glossy black castings do a good job of representing all 53 horsepower, with silvered, under-slung heater boxes (air-cooled VWs used special sleeves fitted around the engine’s header pipes to trap, then circulate heat into the cabin) giving the model a proper rear profile.
Both the bus and the Beetle have decent interiors for the price. The detail here is representative, rather than replicative, with a slight nod going to the Beetle’s cabin by virtue of its orange steering wheel and decaled side glass. The bus’s white gut features a stick shift and pedals; anyone who’s ever driven one of these will feel right at home.
The wheels on both models are a love or hate affair; patterned after Empi 5-lug units that were wildly popular with the custom VW set back in the day, these might have looked a lot better with a correct chrome and matte black finish on the bus, and a metallized satin on the Bug. Either would have given the rims—which are well-cast—even more depth and presence; given the models’ easy build, painting and detailing the pieces, or replacing them with aftermarket or swapped-in wheels and rubber, might make a cool project and it would add a lot to the final result.
It looks like GreenLight has gone through these mold sets and tweaked some of the plastic bits to add a bit more detail and value. That’s always a good thing. If you’re new to collecting, or looking for a cost-effective way to add some classic Volkswagens to your collection, these might make a great addition to your shelves. 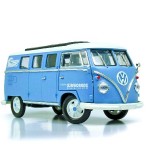 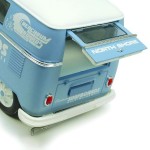 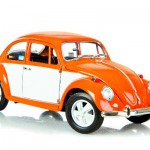 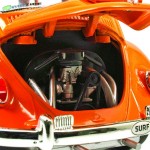