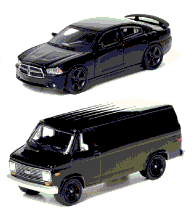 GreenLight’s Black bandit series 7 is back with all new flair. This latest edition of 1:64 die-cast features some of their newest molds including their latest castings – the 2012 Dodge Charger R/T, the 2012 Ford Focus (featured in Road Racers), the 1976 Dodge B100 Van (styling some vintage striping down the sides) and the 1977 Chevrolet G20 work van. The 2012 Ford explorer is sporting a new light bar edition and the 2012 Ford Mustang GT has a new engine and hood! This 6-set captures the essence of Black Bandit.