GreenLight has had phenomenal success with their Hot Pursuit series, and there’s no wonder why. Each vehicle is an authentic replica from an actual police force, and the latest series – Series 9 – is no different. The release draws inspiration from the Nebraska Highway Patrol, Cincinnati, Ohio Police,  Oregon Highway Patrol, Raleigh, North Carolina Police, Wilmington, Ohio Police and the Westfield Indiana Police.  That last organization’s colors happen to decorate the debut release of GL’s new 2010 Ford Explorer mold in a mainline series; until now it was only seen as a Yankees premium. Cop one while you can. 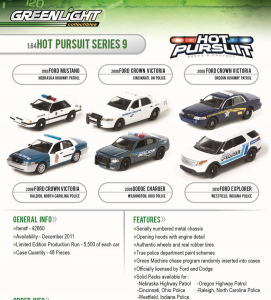