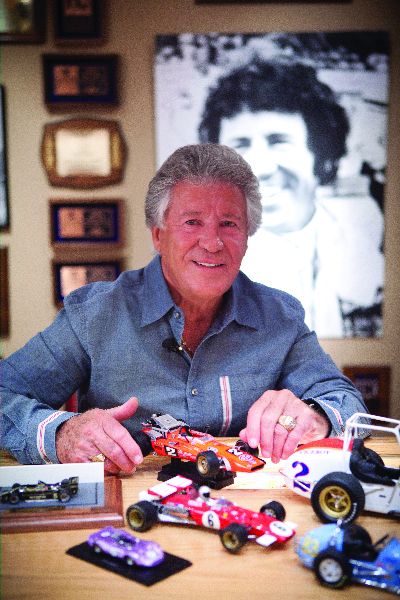 Grazie, Mario: The legendary Mario Andretti shares his home—and his collection—with DCX
[kaltura-widget uiconfid=”1727923″ entryid=”0_ax7ine3q” width=”640″ height=”390″ addpermission=”” editpermission=”” /]
The November drive north into Nazareth was colorful. Working off bellies full of hotel lobby waffles and taking to the hills outside of Easton, we watched as the strip malls and roadside attractions were replaced with rolling country. Pennsylvania hadn’t yet lost her leaves, and the panorama was vibrant; green giving way to a final, lingering burst of foliage that draped the barns and farmhouses before the gray and white slumber of winter. Through the gates; up the driveway; the blue eyes that greeted us that crisp northeast morning belonged to the personal assistant and majordomo to Mario Andretti, who smiled as she ushered us inside.

The next set of eyes we saw belonged to the man himself. Rising up from behind a desk, at 71, Mario Andretti is compact, trim and still possessed of a sharp gaze, a firm grip and an open smile. Despite the accomplishments of his life and the splendor of the surroundings, there is no pretense with Andretti, nor is any needed. This is a confident man whose path started amid the ashes of a world war, who survived a childhood spent in a refugee camp, and who escaped communism to find opportunity here in America amid the grit and danger of open wheel racing.

A few minutes after shaking hands, we were invited into Mario’s inner office and then, deeper into Villa Montona, his estate named after the Italian village in which he and his twin brother Aldo were born. As we went from room to room, the conversation shifted from his six-decade career to his love of racing history, and, of course, his passion for collecting diecast and scale models.

By his own count, Mario Andretti has driven 166 different race cars. His ability to remember the details and articulate his experiences have made him legendary not only as a driver, but also as a witness to history. As such, he’s been involved in literally dozens of model car projects, as a consultant, as a historian, and as a licensor of the Andretti name. He also collects models from outside his own domain and frequently receives scale model homages, hand-built or otherwise, from devoted fans and associates—all of which, he says, bring him great personal joy. Some of these, as we saw during our time in his beautiful home, have become a part of the decor of his everyday life. The number of pieces in the overall collection isn’t known; in addition to the thousands of framed newspaper and magazine clips, meticulously mounted bits of race cars and trophies, and the pieces of art that cover the walls of Montona, Andretti Enterprises keeps a well-managed warehouse for the storage and safe keeping of the greater bulk and balance of Mario’s models and memorabilia.

Before we set up to record the interview, we were taken on a tour of sorts; first to the trophy cases in an upstairs foyer, then to his home garage, where, alongside the Andretti family cars, we were treated to the sight of the last Indy Car Andretti drove—the Newman-Haas Texaco/Havoline Lola T94/00 #6 he’d piloted until the engine failed at Laguna Seca in 1994.

“It’s the only car I ever asked for,” Mario said, “and I would have been happy to have it just as it was, after the race—dirty, tires worn out, covered in oil. But they rebuilt it before they gave it to me. It’s completely race-prepped.” Asked why he didn’t collect more cars over the course of his career, Mario smiled. “The cars were all owned by the teams—I was just a driver. And besides, where would I put them all?”

Like most collectors, Mario’s figured out a viable alternative to amassing a lineup of full-sized cars: scale models. “I love the details of these things,” he said, “and I can tell when the manufacturer has really worked to get everything right.” One choice piece from Mario’s inner office is a 1:18 diecast Carousel 1 Watson Roadster, the Offy-powered #12 “Dean Van Lines Special” from 1961, as driven by the late Eddie Sachs. When Mario and his son Michael took part in the IMAX film Super Speedway, the senior Andretti drove a similar car just before the end credits—the #12 1964 Eddie Kuzma roadster, a race car he’d not seen since that season, now a lovingly restored piece at which Andretti still marvels. “When they rolled it out of the trailer, I couldn’t believe it,” he said. “They even got the upholstery right. What a great job they did on that car!”

The roadster model, as well as Exoto’s 1:10 replica of the Holman & Moody-prepped Ford GT40 MkIV that he and Lucien Bianchi shared at Le Mans in 1967, are among his favorites; in addition to the hand-built (and too heavy and valuable to safely move) one-off presentation pieces that flank his desk, Mario takes no small delight in the mass-manufactured replicas that he keeps close by, in his office and in his home—some of which were brought into his recreation room for the video shoot. As we ran the cameras and lights, Mario spoke of his life, his friendships and all that he’s seen, with an angle on how it all relates to his work with, and appreciation of, scale models. Gracious, genteel, and as enthusiastic as ever, Mario Andretti is a man who appreciates his past.

And so do we. As we wound down the session and put away our gear, we took a last look around at the thousands of pieces of memorabilia, and the models and bits of real cars contained in cases and hung on the walls. The collection and its history is staggering. The opportunity to see it and the joy of a life well lived reflected in Mario Andretti’s own eyes, is one we’ll not soon forget. 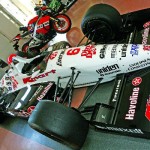 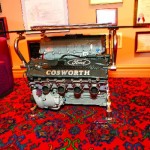 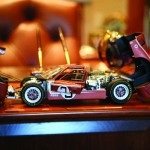 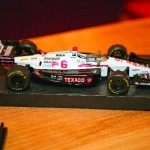 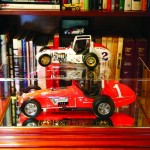 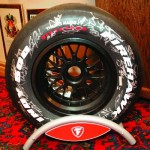 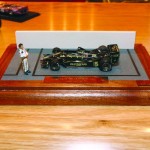 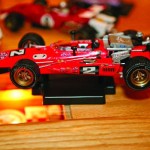 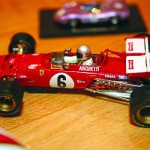 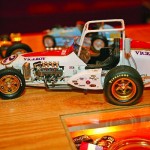 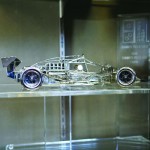 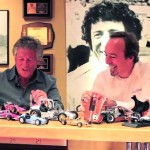