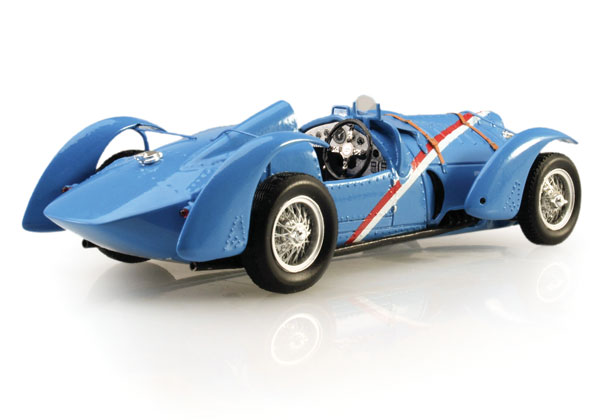 Henri Chapron’s beautifully re-bodied Type 145 was featured in the last issue of DCX; this time we have Minichamps’ beautifully made resin-cast model of the first of the Type 145s as it looked when raced by the French Ecurie Bleue team.  This particular car, Chassis 48771 (now in the Mullin Museum, of course), won the French government’s one-million-franc prize for the first French car to beat the all-conquering German teams, which it did at Montlhéry in a non-Championship race. Photos show that Minichamps has modeled the wide two-seat body shape and the aerodynamically faired cycle fenders accurately.  The resin casting is smooth with lots of crisp detail, but this sample does have a couple of pinholes under the nose. Minichamps’ authentic French Blue paint is excellent and the red/white stripes are done with neatly applied and snugged-down decals. Photo-etched parts are used for the big curved grille, air intake screen, big wire wheels, the hood straps, and what could only have been a big air deflector above the scuttle. A well-done “engine turned” dash with a full set of detailed instruments dominates the interior, but all the controls are just where photos show them.  There aren’t many pre-war Grand Prix models out there, and even fewer are this good. – Wayne Moyer