There’s something intriguing about a covered car … a magnetic pull that draws our eyes reflexively closer. And if we happen to catch sight of a fender, or a glimpse of chrome peeking out from beneath a folded-back shroud, our motor- driven minds can’t help but run off and start imagining the rest of the machine underneath.

It was just that sort of peek-a-boo that drove professional miniaturist Tom Norpell to focus his considerable skills on a singular effect – a semi-covered car – for an upcoming diorama project. And because Tom is obsessed with scale, the results would have to be a perfect fit, in more ways than one. “The biggest pitfall in making any miniature accessory is scale,” Tom said. “Nothing kills an illusion faster than mixing scales. I didn’t want to merely drop a handkerchief over a car because it would convey bulkiness in the material and in its folds. That would be completely out of scale, creating an impression that was decidedly fake.”

Adding to the challenge was the intended subject for the hand-formed piece: a CMC Ferrari 250 GT Berlinetta worth somewhere north of $300 – which meant that tacking a glued-down cloth onto the car was out of the question. The model would have to remain pristine during the making of its custom-tailored coat, and the faux cover would have to be removable.

What Tom did was simple – and simply remarkable. By using a shop-grade paper towel, some diluted white glue, and a protective barrier made of clear plastic wrap that clung to the surface of the car, Tom was able to poke and prod a lowly garage hand wipe into a more-than-convincing, scale correct car cover without harming the model. Here’s how he did it – and how you can too. 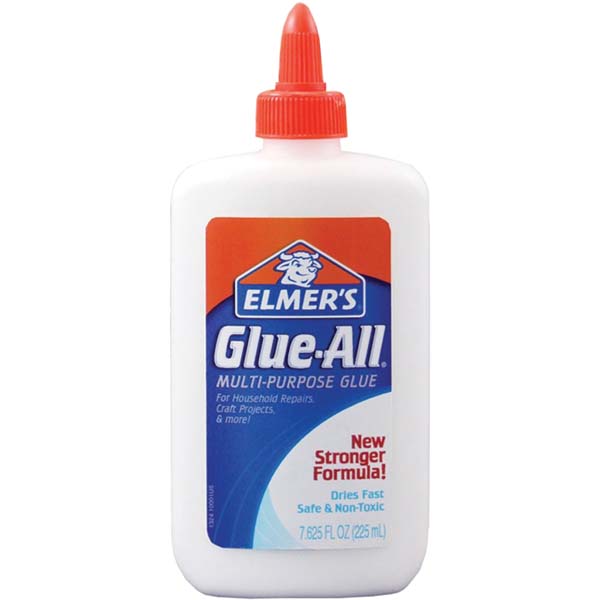 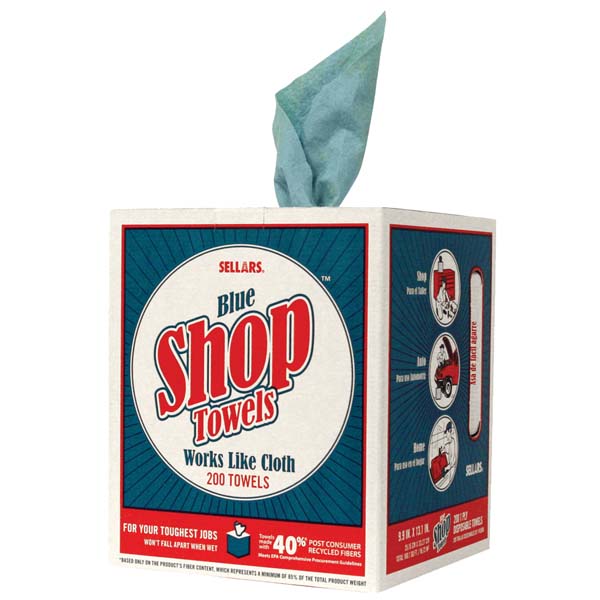 1. Getting a convincing “fabric” is critical. For Tom, that meant a plain paper towel without a printed or embossed design. A roll of paper shop towels turned out to be a perfect source, right down to the turquoise color, though Tom knew that spraying the piece a different color would be an option later on. 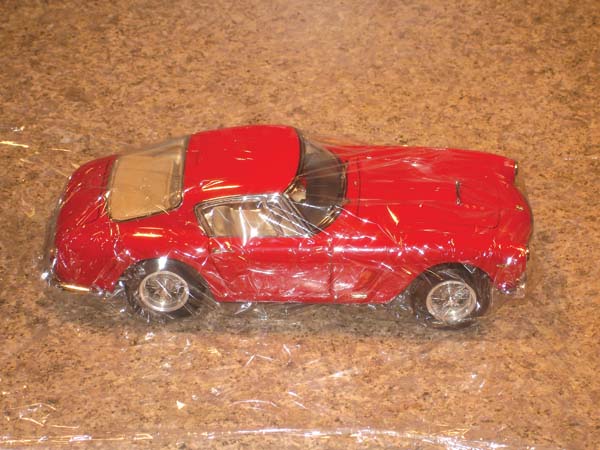 2. Next, the car got wrapped completely in clear plastic wrap to protect its surface, and to aid in the release of the dried cover from the car. Tom used a “clinging” variety of plastic – and was careful of delicate elements on the model to avoid damaging the pricey piece. He also placed plastic wrap beneath the car to protect the working surface while he made the cover drape realistically to the ground.

3. In a bowl, Tom churned up a fifty- fifty mix of ordinary white glue and water. When it was ready, he immersed the paper towel into the mixture and got it completely saturated. 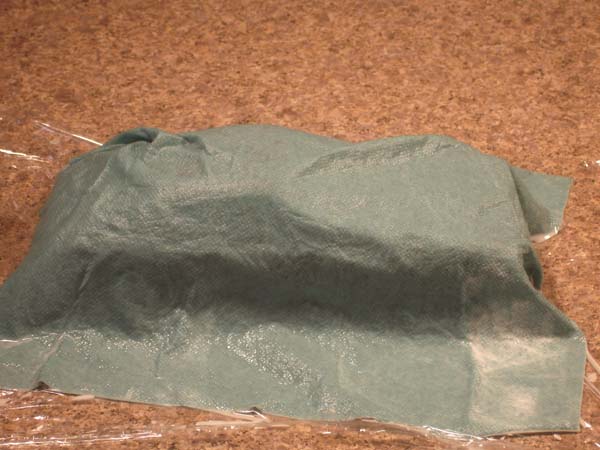 4. Next, the glue-soaked towel got placed over the car. This is the fun part; get creative. Make folds and creases, drapes and dangles. You can reveal as much–or as little–of the model as you want. While the car is wrapped, try making a couple of covers with varying degrees of “hide.” As Tom notes, “Because we’re working with a paper towel and diluted white glue, material cost isn’t a factor. You can do a few different options, and decide which one you want to use later.”

5. This is the hard part: once you’re happy with your wrinkles, bunches, and sags, you’ll need to let the cover dry for a full 24 hours. Patience, young Jedi … patience. 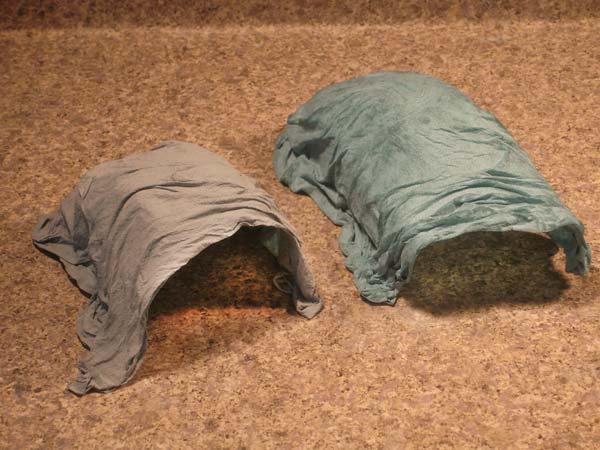 6. If all went well, the next step will be to take the hardened cover off the car, and then remove the protective plastic from the model. What you’ll have is a perfectly fittedpiece that is formed to every curve of the car beneath – as if gravity, not scale trickery,was at work. Tom has had a lot of luck with trying different techniques, including paintingthe covers, and giving mixed media a try. “Remember to experiment along the way. Ionce sprinkled powdered tempera (paint) over a wet car cover, and it dried looking like itwas wearing years of dust.” 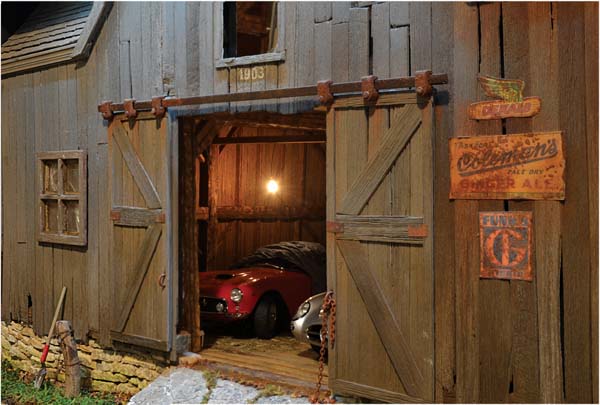 Like the paint and glue he uses so well, Tom’s ideas never stop flowing, and it’s plain to see that a little ingenuity can yield great results. Of course, loads of talent help, too. 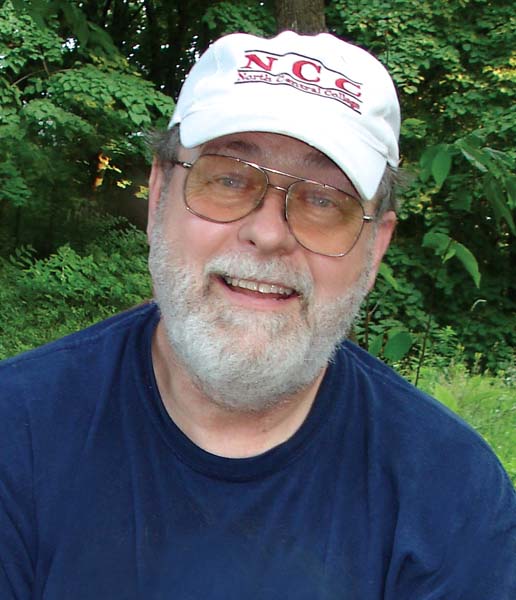 Tom Norpell’s architectural miniatures have been commissioned by private and corporate collectors, including a miniature of President Lincoln’s Illinois home that is in the permanent collection of The White House in Washington D.C. Tom may be contacted at: norpell@comcast.net.