DCXMag.com
From the Magazine, Inside DieCast X 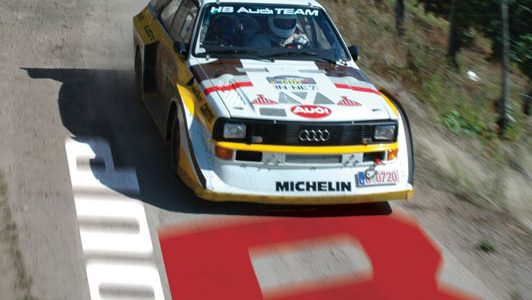 Group B Brought Unprecedented Speed, Excitement, and Danger to WRC
The five years that the World Rally Championship (WRC) was contested using the FIA’s Group B rules were arguably the most exciting, dramatic, and dangerous in the history of the sport, and the era produced the fastest and most memorable cars the WRC has ever seen. Established in 1982, Group B was initially a class of heavily modified but still production-based machines for sports car and rally racing, but the speed and complexity quickly escalated as the manufacturers competing—including Audi, Lancia, Ford, and Peugeot, as well as Renault, Austin Rover, Toyota, Volkswagen, and several others—exploited the numerous rules loopholes. The FIA required that just 200 road-going examples be built to homologate each model, but manufacturers were then permitted to create up to 20 “Evolution” models for each racing season that had extensive modifications as long as they retained the production version’s engine block and certain body panels. Exotic ultra-lightweight building materials and the layout of the chassis itself were virtually unrestricted. 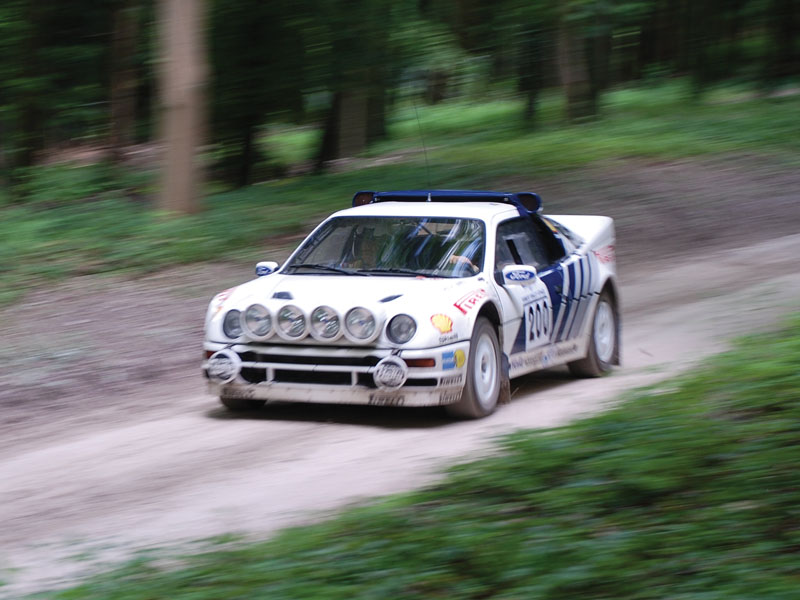 Ford was late to the party when its mid-engine AWD RS200 arrived in ’86, but the car was undeniably quick. Its involvement in the tragedy in Portugal was a huge setback, and when the FIA froze development of Group B cars midway through the ’86 season, Ford pulled the plug.

Audi was proving the superiority of all-wheel-drive (AWD) in rally racing with its Quattro system, taking the title in 1982 and coming within just two points of Lancia in ’83 before regaining the championship in ’84. The other top teams could see that AWD was the future of rally racing and followed Audi’s lead. Peugeot launched its 205 Turbo 16 in ’84, combining the AWD of the Audi with the mid-engine layout of the Lancia—a formula that would win them their first championship in 1985. Lancia and Austin Rover debuted their own mid-engine AWD cars in the final race of the ’85 season—the Delta S4 and the new MG Metro 6R4, respectively—followed by Ford with its similarly configured RS200 at the beginning of the ’86 season. 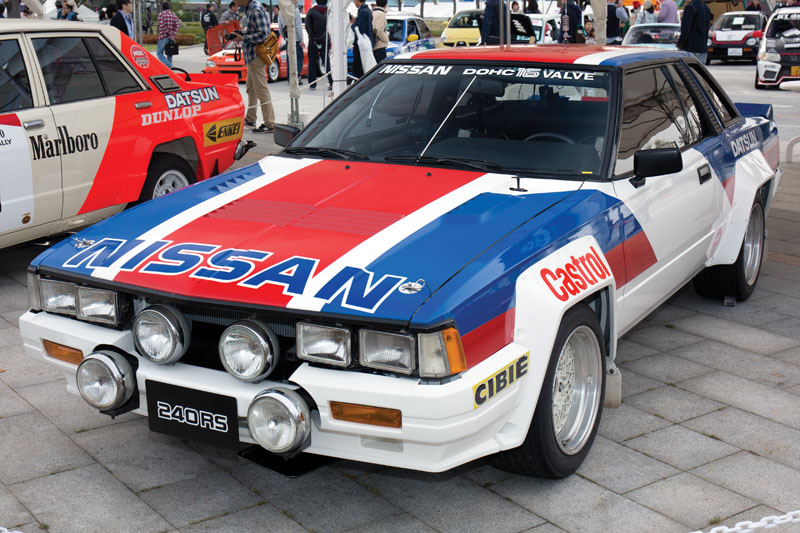 In the early years of the Group B era, highly tuned production cars, like this ’83 Nissan 240RS, made a decent showing. 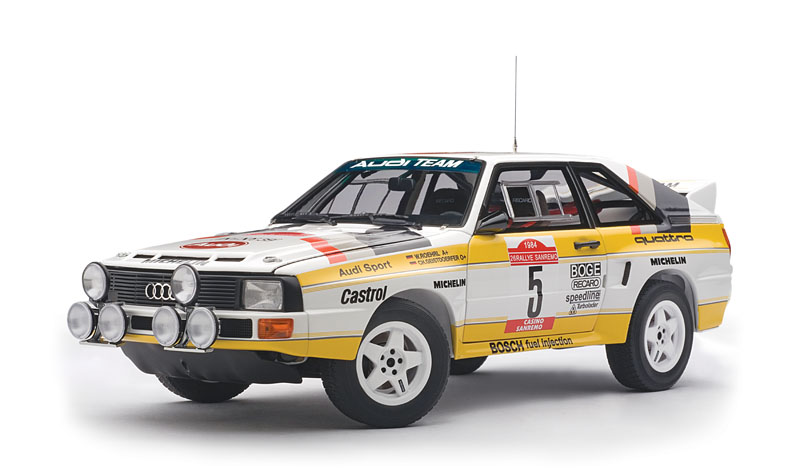 As the quality of competition steadily improved, Audi introduced the Sport Quattro S1—a lighter coupe riding on a wheelbase more than a foot shorter. AUTOart does S1s from ’84 and ’85 in 1:18.

Going into 1986, the WRC had become as glamorous and prestigious as the sport had ever been. Luminaries from around the racing world were paying attention. A certain young Brazilian phenom F1 driver named Ayrton Senna—at the time the lead driver for Team Lotus—was intrigued enough to do a rally test day, culminating in a few laps in the MG Metro 6R4 (see the review on page 40). Group B had become essentially a class of purpose-built prototypes masquerading (barely) as production cars. And while engine displacement was regulated according to weight, boost pressure was not, so horsepower skyrocketed among small-displacement turbo cars. Some enjoyed in excess of 500hp, propelling less than 2,000 pounds in race trim, and the drivers struggled to put that power down on courses covered in dirt and gravel—and sometimes rain, snow, or ice!—lined with dense forest and steep drop-offs, often with no guardrails. It is no wonder then that a series of accidents ultimately brought an end to the Group B era, and the tumultuous 1986 season—filled with speed, tragedy, and political intrigue—would be the class’s last. 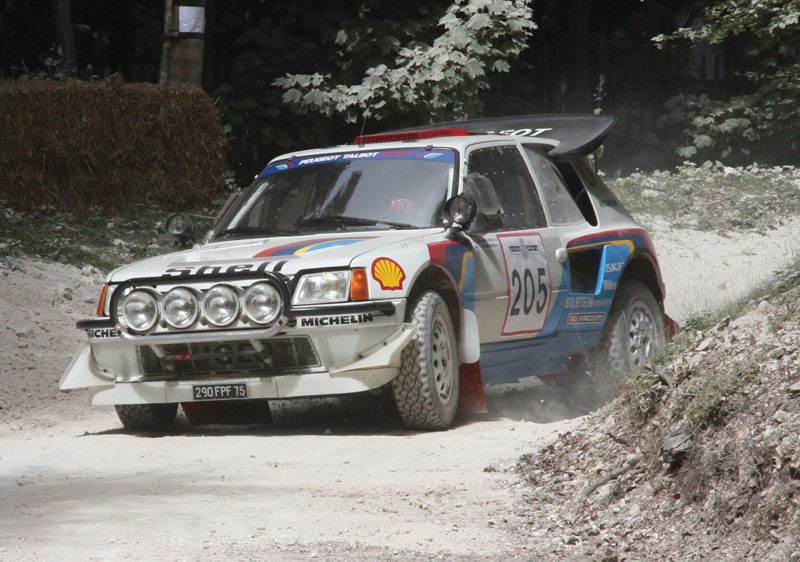 Peugeot introduced the 205 Turbo 16 midway through the ’84 season and became the team to beat virtually overnight. Audi had scored enough points earlier in the season to take the title, but the 205 T16 swept the final three points races of the season and would be dominant in 1985. 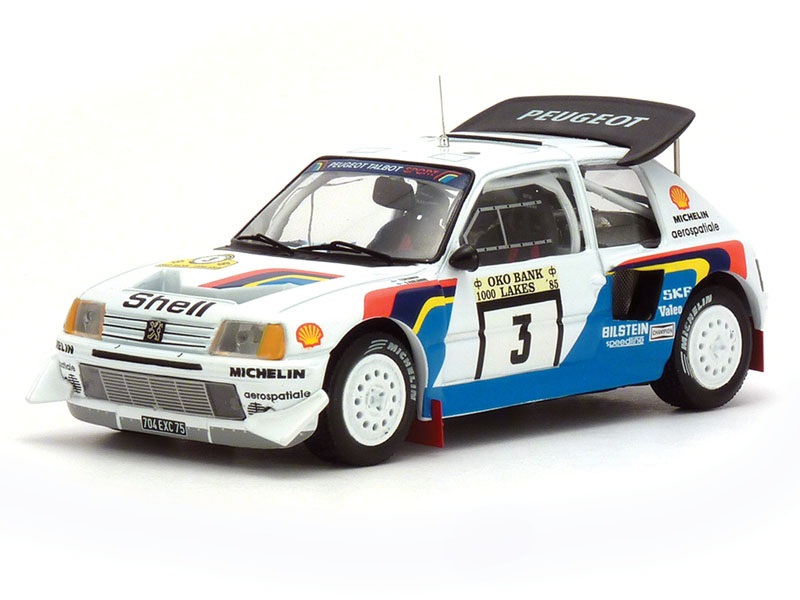 Rally-spec Peugeot 205s aren’t as prevalent as one would think. IXO does this one in 1:43. 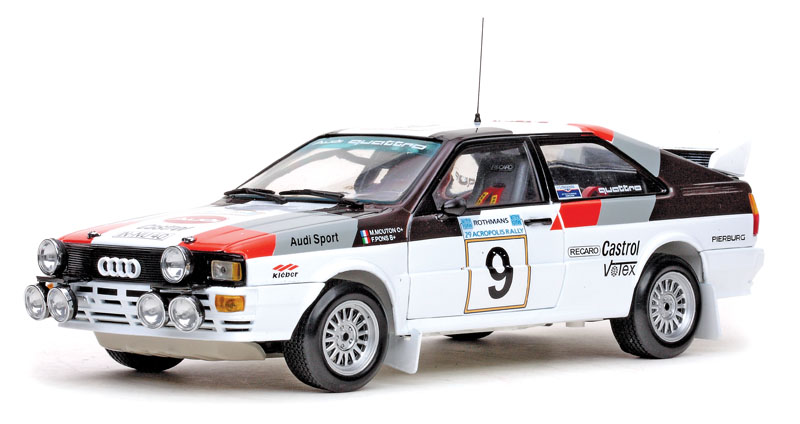 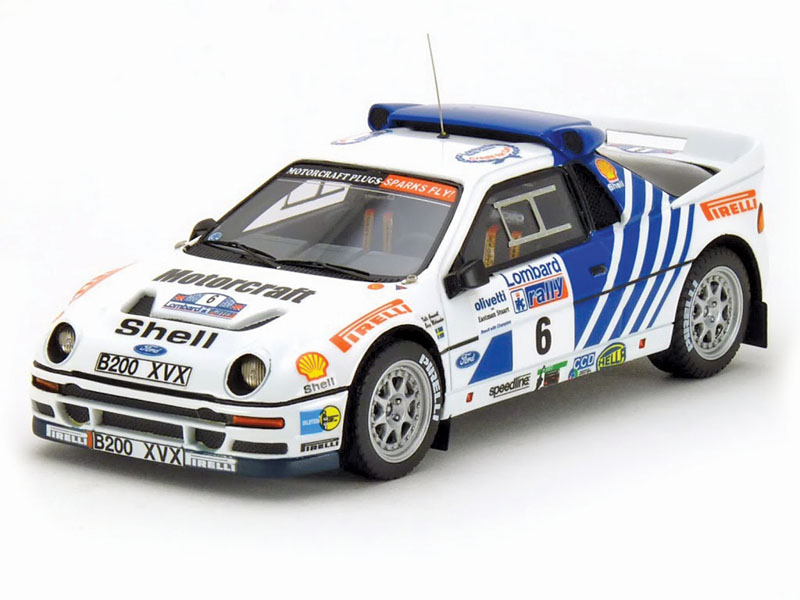 A few manufacturers make Ford RS200s, but Minichamps’ is among the nicest in 1:43. 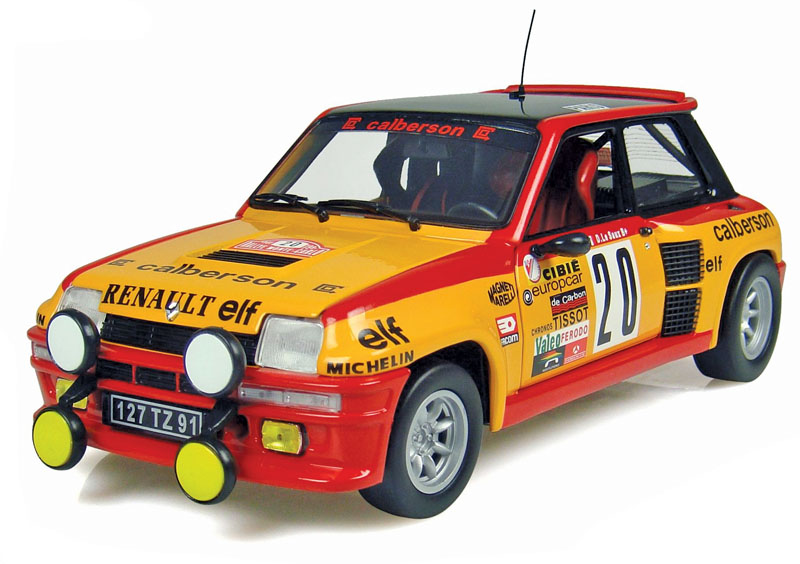 Diecast examples of Renault 5 rally cars are scarce, but Revell and Universal Hobbies made them in 1:18. 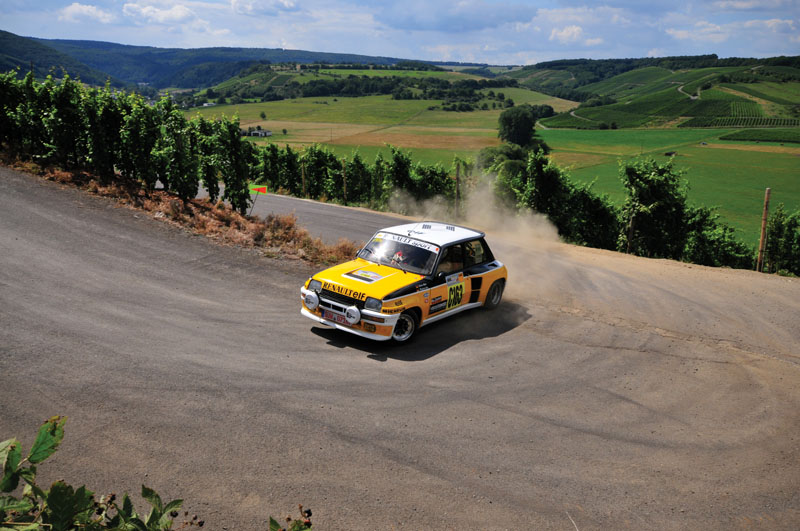 One of the wildest Group B cars was the Renault 5 Turbo. America knew the 5 as the “Le Car,” but the Turbo was a far cry from the econobox we knew: Its tiny mid-mounted 1.4L engine had enough boost crammed into it to produce as much as 350hp in race trim. It won Corsica in ’82 and ’85, and in the tragedy-marred Portugal race in ’86.

Peugeot and Lancia traded victories the rest of the season—with the exception of one rugged event in Africa that Toyota took because the top teams did not enter. Rules intrigue reared its head at Sanremo, Italy, when the local Italian race officials disqualified the Peugeot team from entering for supposedly illegal bodywork, handing the victory to Lancia, “coincidentally” an Italian team. The FIA later determined that that ruling was erroneous, and the entire event result was annulled. Those event points would prove decisive, as both the Driver’s and Manufacturer’s Championships—the final of the Group B era—were decided in Peugeot’s favor by fewer than the 20 points Lancia was denied in Sanremo.

With that the Group B cars were gone, and the much more heavily restricted and production-oriented Group A cars were promoted to the top formula. A few Group B leftovers saw use in privateers’ hands in non-WRC events and rallycross, but they would never again capture the spotlight or the imagination of the sporting world as they did for those glorious five years between 1982 and 1986. That period is often considered Rally’s Golden Era, and many of the cars have become classics. The Peugeots, Lancias, and Audis have all become highly prized collector cars, with numerous models made in various scales and liveries. 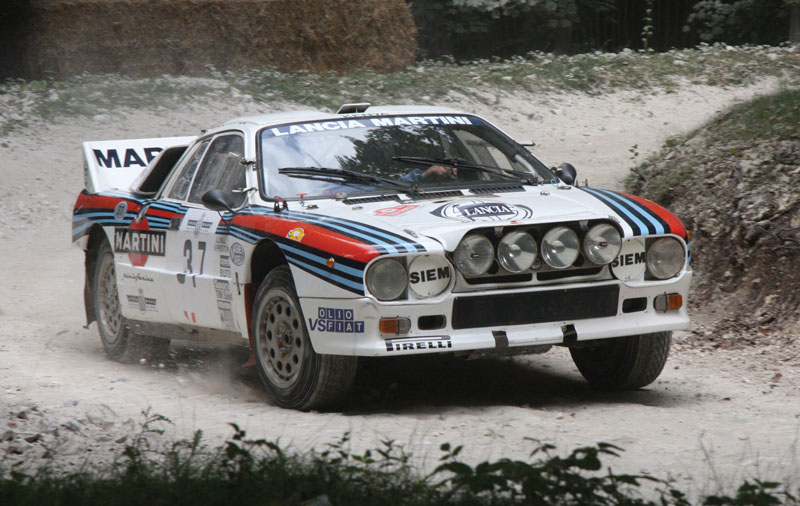 Kyosho released several versions of the Lancia 037 in 1:18 a few years ago. 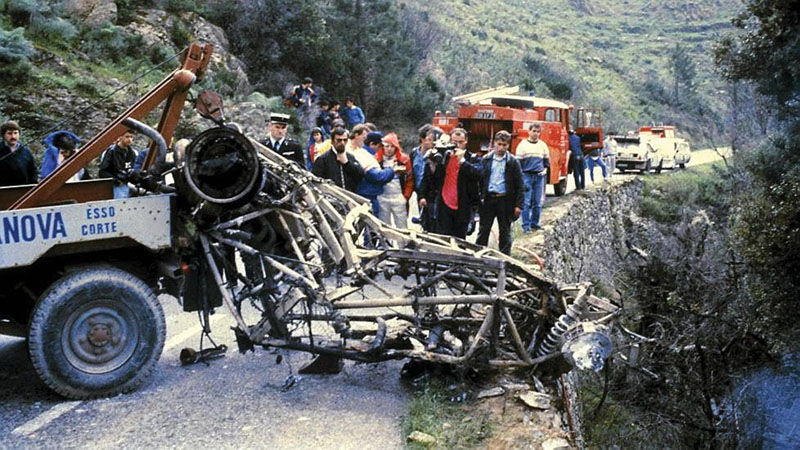 Ever-escalating speed and danger finally took its toll in Corsica when one of Lancia’s top teams, Henri Toivonen and Sergio Cresto, were killed in a fiery crash. There was little left of the car but a bare tube frame. The FIA called a halt to development and announced that Group B would go away at season’s end, to be replaced by slower (and presumably safer) Group A cars.