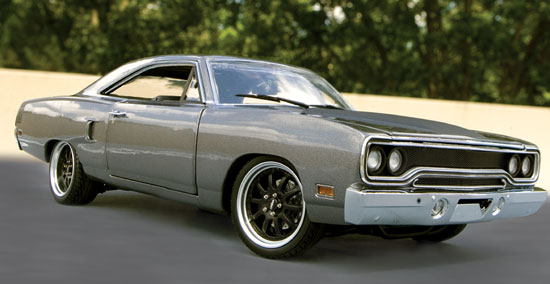 Back in 1968, no one in the automotive industry could have imaged the impact a bare-bones, stripped-down, all-muscle and no-fat performance coupe would have on the public. A few years earlier, the lowly Satellite, designed for businessmen, middle-income families as well for use as taxi cabs and police cars, was given an upgrade to create the GTX. The problem was not the performance of the car but the price range required for Plymouth to recoup its investment. The brand managers gifted the hardtop with plenty of muscle but loaded the model with too many luxury items. When Plymouth rolled out the new B-Body in 68, the problem was addressed by including in the line a no-nonsense model called Road Runner. This was a high-performance coupe with the same sticker price as the Satellite. The results were an instant hit to Plymouths image and bottom lineas well as being named Motor Trends Car of the Year.

By 1970, the Road Runner was at it peak. The model was more refined yet retained the same price as it did three model years earlier. Better car, more options at the same pricewhat a concept.

Kickin Up Dust. Over the past decade, Road Runners have become highly sought-after collector cars. Partly due to the rapid value escalation of its Cuda family member, Mopar fans have turned their attention to the cartooned coupe and hardtop (and the few convertibles) as prime investment targets. Likewise, in diecast, the Road Runner has become a popular staple in all sizes and qualities. In 1:18 scale, the leading coyote killer is GMP. Over the years, the premium diecast maker has released many versions, most of which made their way onto the pages of Die Cast X. The companys latest version is a street custom that sets new standards, even for GMP. A replica of the full-size resto-fied 70 hardtop built by Steve Strope at Pure Vision in Simi Valley, CA, this is a perfect addition to GMPs heritage of pro touring street machines that first appeared in Die Cast X in the fall of 2005.

Power Trip. If you had the opportunity, why wouldnt you want a Hemi? This is where Strope started: legendary power with instant respect. GMP replicated the effort with a nicely detailed engine compartment complete with scissor hinges and ignition wires streaming from the famous hemispherical head valve covers. The compartment is a gentle blend of grays with a splash of silver. Nothing too flashy to distract from the potency that lay beneath the massive air cleaner protecting the presumable twin Holley four-barrel carburetors.

Subtle Intentions. Most street machines of this caliber are clad in bright, attention-getting colors. Strope had an entirely different approach. Covered in a deep grayalmost anthracitethe look is fiercely intimidating. A matte black center stripe was used to accent the hood and carried to the unusual hockey stick stripes on each rear side panel. GMP applied the treatment in nearly flawless fashion. The fit/finish is excellent and matches the level of trim. Especially well executed are the door locks and handles. These items complement the remarkable job done on the window trim.

Interior Restraint. Strope showed amazing discipline when designing and constructing the Hammer Road Runner. This is most evident after viewing the interior. The conservative theme of black and gray provided GMP with a challenge to make every detail stand out. The dash features readable gauges and polished trim. The trim was also applied to the center console and shifter. Low-back bucket seats have a factory-like pattern, as does the rear seat. Door panels also have a subtle appearance. A check of the working window cranks revealed that the windows lift and lower. The trunk lid opens to a wide-open fleece lined space.

Chassis Surprise. One of GMPs strengths has always been its undercarriages and chassis. The Hammer Road Runner continued the tradition with neat and clean work. Duel exhaust pipes run aft through a pair of blacked-out mufflers and exit via chrome-plated tips. The fuel tank is simulated aluminum. Tires and wheels feature realistic tread on powder-coated 10-spoke wheels. Not seen when the Hammer is upright is a small wound spring behind the rear license plate. Sure enough, when gently pushed, the door opens to reveal a fuel-filler capvery trick.

Desert Dreams. In all those cartoon episodes, the coyote never caught the roadrunner. Mired in constant frustration, he tried but never reached the reward. Catching a GMP Road Runner can prove to be just as elusive. Limited production combined with a loyal following of collectors had led to most GMP releases selling out within a few weeks. If you have any affinity for Plymouths popular go-fast muscle car, let alone a taste for the quality GMP brings to the diecast space, dont waste time daydreaming about the Hammer Road Runner.