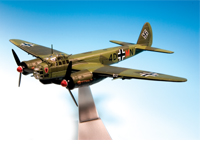 Looking at the military equipmentand aircraft in particularthe Germans employed during World War II, don’t you get the sense that their engineers understood the value of intimidation? So many Allied planes had elegant, flowing lines; Axis stuff looked just plain mean. Take this Junkers Ju88A from Corgithe cluster of asymmetrical protrusions all over the forward fuselage give it a Frankenstein-esque quality, but bristling with machineguns and loaded with bombs this medium bomber looks more than ready for a fight. And looks aren’t deceiving; this plane was a terror to Soviet troops during the Russian offensive, and ended up being the most effective German bomber of any theater. Corgi’s 1:72 version carries the markings of an A-5 that flew out of Finland in 1941 and ’42. Excellent panel line casting and nice detail on the numerous panes that make up the canopy/turret/nose section really show why Corgi is a leader in this segment.