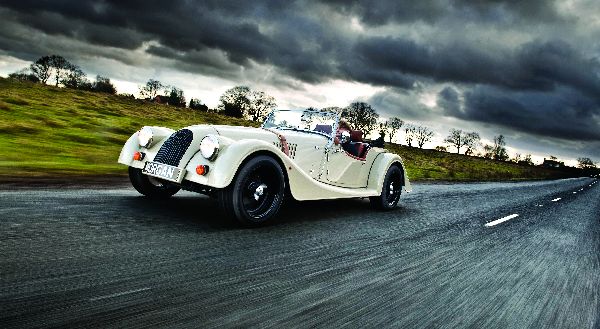 Travel for two, no waiting. Nothing promotes the love of the automobile like a sports car. It is the greatest motoring feel on Earth—two seats, top down, the feel of the road, the oneness between you, the car and the open stretch of pavement ahead. Some call it magic, religious or inspiring. Anyone who has experienced this will tell you it is also addictive—a type of peaceful exhilaration. The feeling is also global; the same in any country and every language.

The greater American sports car experience began in earnest after World War II. As it has been documented, many U.S. military and war personnel returned from Great Britain with a taste of sports car life. While stationed overseas, Americans took to driving MG TA, TB, PA and PB roadsters as well as earlier J-Type two-seaters. In addition, there were early SS (Jaguar) models, Aston Martins and Morgans. Some that spent the war in safer parts of France and Italy found the Alfa Romeo 6C, BMW 328, Bugatti Type 49, and perhaps even a Hispano-Suiza.

Some Americans were able to have these cars shipped to the states. In the fabulous fifties, sportsman-style racing was blooming. This not only included time trails (drag racing) and dry lakes running, but a burgeoning sports car interest. Little MGs and Morgans were well suited for this activity. Soon new arrivals from AC Bristol, Austin Healey and Triumph joined in. The vast majority of these cars were British. It didn’t take long for the German and Italian automotive industries to rebuild and enter the niche with Porsche, Mercedes-Benz, and Alfa Romeo. There were also bigger, more powerful (and expensive) cars from Mercedes-Benz, Jaguar, and Ferrari. But, smaller-engine machines drove the popular sports car revolution.

The Brits advanced its sports car lead with the coming of age of Lotus and Triumph as well as new choices from MG and Austin Healey. Fiat showed up in 1959 to challenge England’s big three sports car makers. In 1961, the MGA and Triumph TR3 held a significant share of the market as a little Japanese roadster emerged. In America it was called the Datsun 1500. In Japan (and everywhere else) it was the Nissan Fairlady. The 80-horsepower sports car didn’t seem like much of a threat at the time, but it set the stage for a major shift in global power by the end of the decade.

As MG, Triumph, Alfa and Fiat continued to refine its products, even in the face of mounting labor and parts supply issues, Datsun (Nissan) was building a surprisingly loyal consumer base with the 1600 and 2000 model roadsters. Then, in mid-1969, the 240Z was released. In an instant, everything changed. The Z was a major sensation. Sales quickly blew past anything MG or Triumph had to offer. The Z’s arrival on the world sports car stage rendered the new Porsche 914 (also released in 1970) virtually invisible. The winds of European sports car supremacy radically changed and it needed a groundbreaking concept to shift attention away from the Orient. That came in the doorstop, wedge designs of Fiat’s X1/9 and Triumph’s TR7. However, by the end of the ‘70s, another Japanese automaker, Mazda, had one-upped the European brands with the superior, rotary powered RX-7. Once again, this would be a foreshadowing of what was to come.

By 1980, the demise of the British sports car reign had arrived. Growing labor issue and questionable build quality spelled the end of Triumph, MG, Morris, and others. By the end of the 80s, Fiat had pulled out of the U.S. market and Alfa was not far behind. Nissan had jumped the size and price of its 280Z and 300Z beyond the “small sports car” parameters. Just when the small sports car marker seemed doomed to extinction, Mazda single-handedly not only saved the space, but redefined and reinvigorated it in one stoke of genius—the MX-5 Miata. In one package, Mazda had designed everything that was right about early MGB, Triumph Spitfire and Lotus Elan, with engineering that was rock solid and bulletproof. The car had no rival (not even the Toyota MR2) and no equal would emerge until the 1996 BMW Z3. The Miata has faced more recent challenges from a number of brands, such as Pontiac, Saturn and Toyota. None could put a dent in the Miata’s sales armor. The only true contemporary to the Miata has been the Honda S2000. Although the S2000 is a more expensive package, it does fit within the defined borders of a small-engine sports car, unlike the Nissan Z cars and Toyota Supra.

Small sports cars in diecast have long been a favorite in all scales. If logic were always a factor, every manufacturer would have a Miata in its line. This, however, is not the case. The most popular small sports car is likely Porsche’s 356. Also in the popularity race is the MGB and Datsun 240Z. The 356 is offered in most scales from 1:64 to 1:18. In the smaller scale, GreenLight has street and sportsman versions from its Auto World series. In 1:24, check out Franklin Mint’s cabriolet. Coupe versions can be found from the upper price range from Schuco and in the modest MSRP from Maisto and Bburago. One of the coolest of the small sports car diecast set is Kyosho’s Triumph TR3. This is a highly detailed 1:18 scale collectible is offered in red with tan interior and black over red interior.

The revolution that was the Mazda Miata didn’t carry over very well into diecast. That is to say, that the number of diecasts on the market is surprisingly low for the most popular sports car in history. Hot Wheels offered a first generation in 1:64-scale in its mass-market lineup. Johnny Lightning’s 1:64-scale version was much better in terms of casting quality and detail. In 1:43-scale, AUTOart’s current generation is very nice. And, in 1:18 scale, the original 1990 is a well-detailed representation of the car that brought the small two-seater back into fashion.

There are landmark “oddball” sports cars out there as well. The Lotus Europa offered a strange mix of styling and a massive double blind spot. In scale, both Kyosho and AUTOart have quality 1:18- and 1:43-scale versions. One of the weirdest little sports cars was the Austin Healey “Bug Eye” Sprite. Originally, the car was to have flip-over headlights. But, when the cost of development became too expensive, the headlight buckets were affixed to the car in the open position. Thus, it looked like an animated insect and so came its nickname. Revell made a 1:18-scale Bug Eye that can be found on GoMotorBids.com.

A car lost in the hoopla over the Datsun 240Z was Porsche’s 914. Revell also managed to release a very fine 1:18 version several years ago. While no longer in production, it may to located at GoMotorBids.com and/or scoomer.com.

The most recent stock of small sports cars have really pushed the envelope in terms of styling, performance and reliability. Mazda’s MX-5 remains the benchmark. Honda’s S2000 is a landmark convertible that is truly world class, and the recently departed Pontiac Solstice and Saturn Sky offered American challengers—be it ever so brief. Odd as it may be, these popular sports cars are a rarity in diecast.

It is easy to lose site of small, personal sports cars when the world has placed such a premium on more powerful exotic two seaters. But, for all the shortcomings in space and power, MG, Triumph, early Porsche, Fiat, Datsun, Toyota, Honda and Mazda have provided driving enthusiasts with many of the most memorable and loved cars in history. Even in scale, there is a bit of magical freedom in these tiny wonders of the open road.