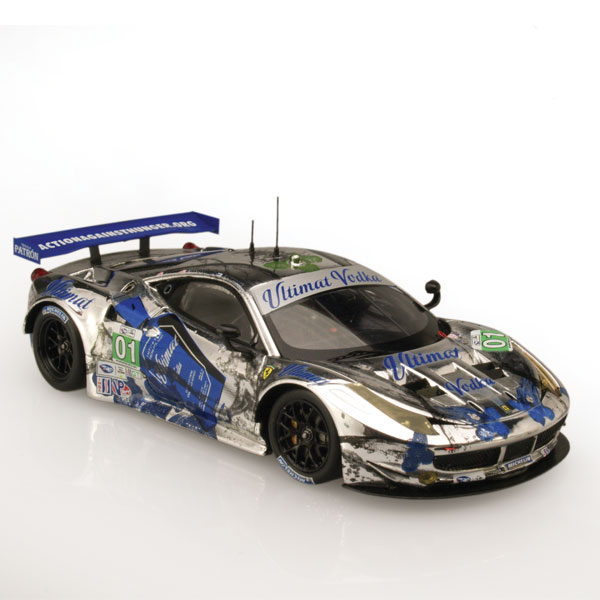 In a world of “Absoluts,” it’s refreshing to know that there’s an alternative for those who imbibe the clearer spirits. Ultimat vodka (what is it with these guys and a final “e”?) ran this chrome and blue Extreme Motor Sports 458 Italia at the Petit Le Mans in Atlanta in October 2012, and won in the GT class, placing 12th overall. This one is hard to miss, with its chromed resincast body slathered in race day decals. All of the lensing and glazing is correct for the car as it raced at Road Atlanta, and the screened sections at the car’s nose and tail have even more detail lurking behind them. From the dash, to the cockpit electronics and belt-equipped race seat, to the piped-in topside engine and structure visible beneath the glass, we loved the interior. It’s pure competition Italia, and done very well. True, the decal film does get noticed here and there against the chrome, and we had to do a bit of buffing with a cotton swab in a few spots to get the model looking its best, but the overall detailing, race rubber and wheels, and stance of the car are terrific. And who wouldn’t love a chromed Ferrari? — Joe Kelly, Jr.