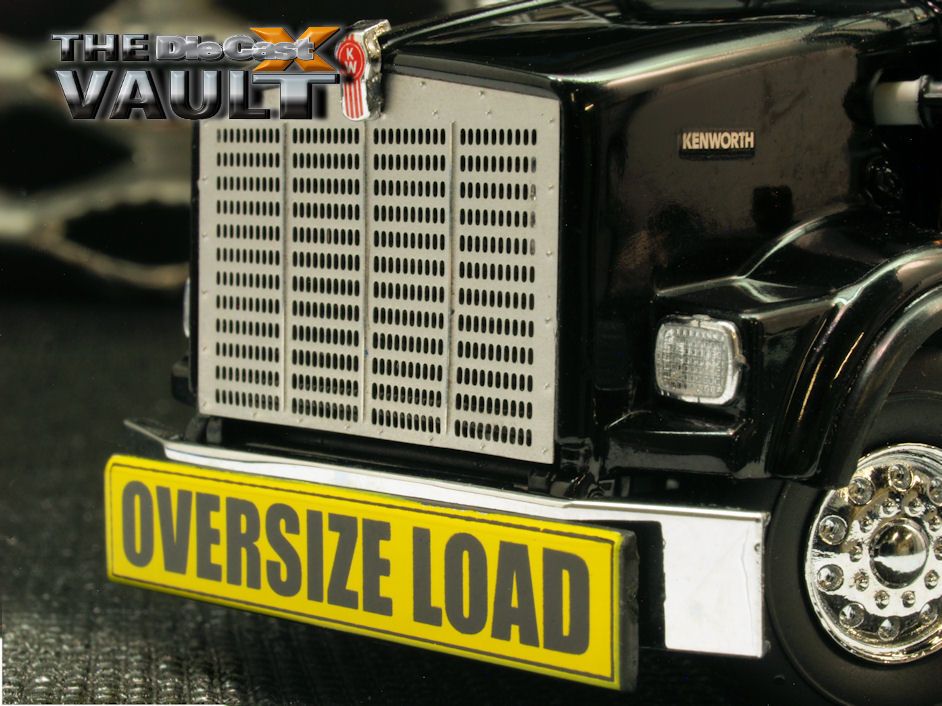 To the uninitiated, the scale of one to fifty might sound like a level of reduction that could make detail and features hard to see and appreciate. Nope. To those truck and equipment collectors who know and love the scale – and boy, do they ever – well done 1:50 models offer a perfect balance of great detail and features, and a size they can live with – kind of important when you’re talking big rigs, cranes, dozers and equipment.

Once again, we’re wading into the scale to check up on some classic releases – this time from top-shelf providersTWHand Sword Models. New to truck and equipment collecting? These may be hard to find – but they’re worth the effort. Put your favorite hat on, have a seat – and take a look.

Rogers“lowboy” trailers are built for big, roll-on loads, like bulldozers, graders, mobile cranes, or any combination of the above. They’re engineered to be wheeled to a job site, where they shed their “gooseneck” – the angular beam that hitches to the tractor at one and, and the trailer at the other – all the better to allow easy off-and-on handling of the machines they carry.

Of course, that’s simplifying things a lot, and seeing one of these at work is impressive. Seeing one in high-detail small scale is impressive, too. We’ve got the chance to do just that, twice: Sword’s sent along two killer sets of tractor/trailer combos; one’s a Mack Granite with a Rogers Lowboy in tow, and the other is a Kenworth T800W pulling an identical Rogers trailer of its own.

The first thing that hit us about these was their overall size on display. When hooked up, the combination of either of the four-axle tractors and quadruple-axled trailers reaches a length of close to twenty inches. And not a fraction of that is sloppy, imprecise, or anything less than perfectly painted and put together. On the Kenworth, the black finish is lightly applied enough to leave the fine details like rivets and cast-in body detail visible, while providing a high gloss finish. Same on the Mack, and both of these day cabbers feature opening doors, tilt-up hoods, and poseable front wheels. Foil badging of just the right depth is on the doors and hoods, along with a wee bulldog on the Granite’s nose. Photoetch is on the mix, too; on the KW, as a realistic grille, and on the Mack, it’s used for the steps leading to the headache rack, and the walkway out back.

Engine and chassis detail on both is startling – and built onto a working suspension. Coiled, colored steel springs make up the air and electric hookups; details like the chains on the rack and the amber bar light atop the Kenworth,  and the Granite’s full complement of warning labels, lights, and chassis plumbing make the trucks a marvel in hand.

With four separately sprung axles of its own, the trailer isn’t exactly lying down on the job. That is, of course, unless you want it to; if so, pull the gooseneck off its mounts and fold the ramps forward. Rolling on chromed metal dually wheels, the Rogers’ diecast rails have swing-out arms to hold the included “planks”; use these if you want to park a piece of equipment back here. You might want to have a good look around, first: even the gooseneck is wired and plumbed.

These are incredibly involved – and involving – collectibles. Out of the box, you can expect to spend some time setting either of these models up. Plastic fenders, rubber mud guards, side mirrors and roof-mounted horns go on, and cables and wires get plugged in. And here’s our only complaint: Sword seems to take for granted that collectors know exactly where everything goes. Unfortunately, not all of us do; an instruction manual of sorts, even a glossary, might make things easier – even for a newbie.

Sword’s Peterbilt 357 wears a mega-yard East Genesis dump body in this release, and the bright yellow Pete is slammed with visible detail even before you open the little bags of hardware, mirrors, and add-on parts it comes with. The photoetched grille, outstanding tamped-on and applied graphics and markings, and a beautiful metallized finish on the dump body make the model a head turner from moment one.

Closer in, the truck really comes alive, with a tilting dump (and telescoping ram beneath), a working suspension, poseable wheels, opening doors and a tilt-up hood. And no, that’s not it: while the dump is raised, you can haul the third axle up and lock it into place by twisting two tabs; if you’re feeling particularly sporty, you can also remove the real fabric dump cover, open the tailgate, and play around with the handles and cranks out back. We have to admit that we opted out of any such activity – just because we all felt too ham-handed to have at the tiny, tight bungees at the rear of the cover.

Mounting the mirrors was easy, though, and the installed units didn’t get in the way of the opening doors, so seeing the cabin’s nice dash and seats, pedal detail, and headliner above was a snap. The engine is cabled, and Sword’s even put firewall detail into play under here. Beneath the truck, the brake hoses and that working, articulated beam suspension added finger fun and even more scale credibility to the model.

Overall: A model that puts “wow” in the palm of your hand.

One of the first Sword models we ever reviewed had an Elliott fuel/lube body on it, and it’s still a heck of a show. This time, the utility star is parked on a Mack Granite chassis, and the combination comes across as a rolling lab for mad scientist truck mechanics, with tanks, rails, opening doors, mounted machinery, and legible markings everywhere.

It may be a model that appeals to your inner Simon Bar Sinister, but in life, these trucks are the chuck wagons for a hungry fleet of machines, dispensing fuel, air, water, and all the various and sundry specialty lubricating fluids all that heavy metal needs to live. The white paint is even all over the castings, and that makes the chromed horns and mirrors pop; the contrasting black that surrounds the windows adds to the visual nicely. The opening doors were really hard to pry out, due to the model’s amazing panel fit, but a little fun tack on a fingertip gave us the needed traction to get into the full-on cab.

Getting the utility doors open was a lot easier (good thing – there are ten of them), and the roll-up that covers the bank of hose reels and nozzles at the truck’s business end was a snap to open and close. As on the other Granites in scale (and in life), tilting the hood leaves the radiator and grille in place on the frame; the Granite’s massive straight six is nestled between inner fender inserts and wired and painted up beautifully.

Fire trucks have become so advanced that their inner structures resemble landlocked fighter aircraft. They use a lot of the same materials; hardened aluminum, titanium, and sophisticated castings and extrusions give the giant bodies amazing strength at a weight that allows acceleration and handling better than anything toting this much equipment has ever had before.

TWHsent along this Pierce Quantum pumper, decorated as part of the Seminole County Fire Department, and it’s a beautifully finished piece. The tamped-on and decaled body wears perfectly aligned stripes and flawlessly installed glass; delicate wiper arms are on the windshield, and the Pierce’s beautifully lensed light bezels, brightwork, and extensive diamond plate walkways and boxes are done in a hybrid mix of painted diecast and lavishly chromed cast plastic. The control panel up top looks great, as do the built-on fire axes and grips all over.

A fine, permanent mesh screen covers the hose bed on the rear section, and the ladder carrier tilts to the side; you can pull the sticks off and extend them (oh, go ahead – I won’t tell anyone), and though the doors all over the truck are sealed, you can tilt the big cab forward to see the six-cylinder diesel and Allison trans, as well as the wired-up twin tandem battery boxes. Get an eyeball in close enough, and you can read the “Pierce” that’s been pad printed onto every seat in the cab – now that’s some trick, “extra mile”  stuff.

Overall: Great model to walk around, despite mostly closed design.

TWH makes their daily bread tooling up promotional models for the companies that make heavy equipment, and because of that arrangement, they have access to straight-from-the-manufacturer info on upcoming product. That makes for timely models – and a wildly detailed line of replicas.

It also makes for the occasional less-than-light (but truly educational) reading, like the pamphlet that came with TWH’s 1:50 Manitowoc Grove RT540E crane. Wanna know load capacity related to boom length? Gotcha covered. Looking to engage that hottie at the hardware store in a conversation about tip height? Go make hay. Page 2…. and, it’s 154 feet.

The hands-on aspect is definitely enriched by the added info, as well as by the  basic, one sheet instructions-cum-owner’s manual for attaching the jib to the model. Newcomers to the equipment hobby will be grateful for the how-to, and less nervous about fiddling around.

And there’s a ton of that here. The mini machine pivots 360 degrees, and the boom lifts and extends – just keep an eye on that rope; you definitely don’t want it to tangle next to the spool. Trust me on this one. There’s a sliding door on the cab, and the area’s got every detail right, from the grab handles and control sticks to the first aid box mounted to the wall. Pull the panel to the left of the crane and there’s a spider’s nest of hydraulic lines and controls. Go topside, and the twin rope spools give, and tighten, slack under thumb pressure.

The axles steer independently, and if you want to pose the machine in working mode, you can hoist the crane, add the jib, and pull out the extended stabilizers; twist the pads into place, and you’re ready to rock. A look at the Cummins QXB 6.7 liter diesel (yes, I read the manual) is only a door pull away.

Overall: great detail reaches new heights – read all about it.

Sometimes it’s fun to trade driving shoes and leather gloves for steel tipped boots and a hard hat. Models like these have been entertaining collectors for years – and having them around here has definitely put a smile on our faces. Hope it did the same for you, too.