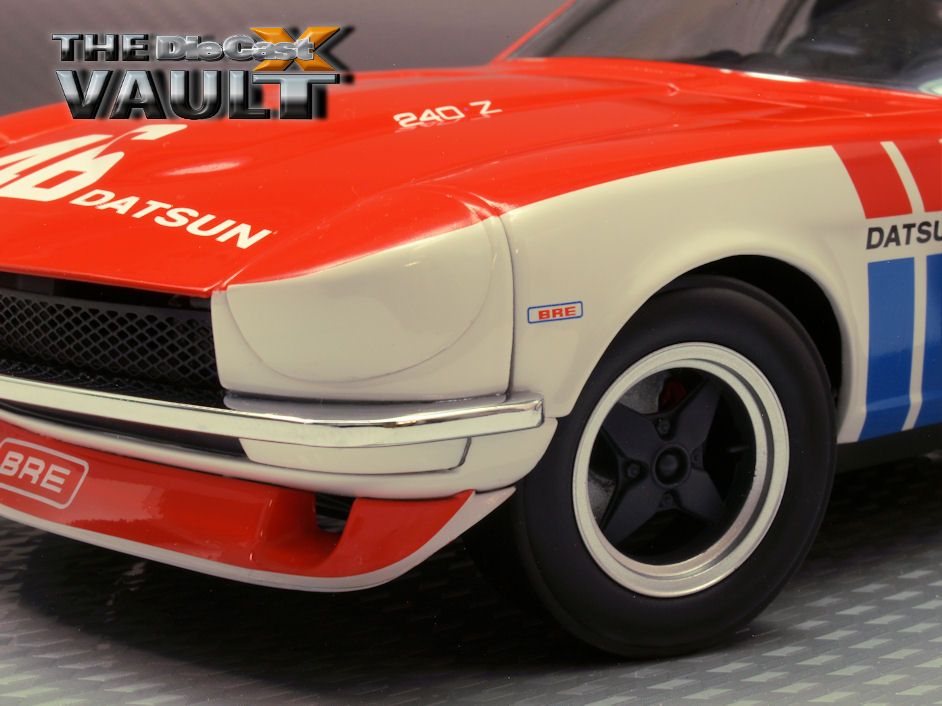 Peter Brock had it all figured out in late 1966. He’d just penned a deal with Toyota to develop its sleek 2000GT as a race car, and had set up shop to do the necessary work almost as soon as he’d touched down from Japan. One minor problem – the cars never showed. It took a clandestine call from a friend to clue Brock in: he’d been one-upped by his old boss, Carroll Shelby, who had persuaded Toyota to give him the deal, instead.

Brock didn’t take the news lying down, and a knee-jerk call to Toyota’s archrival, Datsun, got him a tepid response. But Peter Brock had fire in his belly, and knew some powerful players in the Datsun hierarchy. The opportunity for Datsun to become a world-beater soon started sounding too good to pass up, and Brock was quietly shipped a set of Datsun 2000 roadsters… which started winning a lot of races. With great cars, great drivers – even a great livery that stood out brightly on race day – BRE was suddenly in the spotlight. In 1970, those bright Brock colors got applied to some of the first 240Zs to arrive in this country.

Of Spooks and Spoilers

Perhaps the most famous of those Zs was the number 46 car piloted by 1970-’71’s National Champion, John Morton, and it’s been brought out here very nicely by Kyosho in 1:18. It’s a great subject, and we’d have to say it’s one we’re glad to see delivered by this consistently well regarded quality maker. Kyosho’s mold has the Z’s beautiful profile and graceful shape repped almost perfectly, and when decorated with BRE’s two-tone paint and tamped-on markings, it makes for super stuff on display.

In hand, of course, it gets even better. The opening doors, hood, and rear hatch are mounted on nearly scale correct shut lines, and the model is tight and rattle free. The four-spoke racing wheels look good, but they could use a more polished appearance at the rim – as well as a better set of brake hardware behind. Not a deal breaker, to be sure, but the rest of the car looks so good, the rollers seem a little flat in comparison.

The other add-on bits that Kyosho’s tooled up and tacked onto the car are sweet. Our favorite is the front “spook”, as much for its story as the sight of it; Brock and company hung this on the car as a “brake cooling duct” in order to pass the SCCA’s ruling against aero devices – and the SCCA techs bought it, as they had when such a piece had been mounted on the BRE Datsun 2000. Since the lip on the Z’s rear deck was a Datsun factory item, no such duck and parry was necessary. Additions from the Kyosho factory include that spoiler, the photoetched vents on the back deck, a photoetched grille, headlight blanks, and a pair of outrageous zinc chromate-colored tailpipes that exit the rear of the slick-shoed car nicely.

The caged interior looks great from either side or from the rear hatch, once you’ve fought the good fight and gotten the doors open (Kyosho supplies a tool for the job), and uses well engraved and textured castings to replicate the car’s mildly stripped cabin. Fabric belts and harnesses loop onto the rear cross member of the cage, and the pedals and directional / headlight stalks are neat, thin section castings behind a beefy steering wheel.

You want beef? Tilt the hood forward, and the car’s 2400cc straight six is surgically painted and assembled, and festooned with ignition wiring, aircraft-grade hoses and fittings, and a trio of massive side-draft Mikuni carbs. These engines gave BRE mechanics and engineers fits, at first; third-order harmonic vibrations caused catastrophic motor failures of the spectacular, sheared-crankshaft variety until more counterweights were added. No such drama here; just neat castings, well painted and set into position perfectly.

Truth be told, we’d been hearing about this model on the grapevine for months before it was officially announced by Kyosho, and now that it’s here, we’re hoping that its immediate, enthusiastic reception by collectors spurs the K-folk to consider a few more like it. It’s a great piece. What with the licenses involved, and the added tooling that was required, we’re grinning from ear to ear over the model’s reasonable cost – when we aren’t laughing out loud that it’s even here to begin with. Sounds like a good deal to us.

– FROM THE DCX VAULT; CHECK THE SECONDARY MARKET FOR AVAILABILITY