In case you hadn’t noticed, we are in the heart of car show season, and while much of the country is mired in frosty winter temperatures, the vehicles premiering at the big shows are red hot! The North American International Auto Show in Detroit in January brought us the explosive return of the Bullitt Mustang, and Ford followed that up in February with the announcement of an all-new Raptor version of the forthcoming Ranger pickup. The Geneva International Motor Show—one of the most important shows of the year—arrives the first week of March, but we are already starting to see press releases leak out in advance of that. All these great announcements have shown us five new vehicles that simply MUST be made in diecast in the coming year! 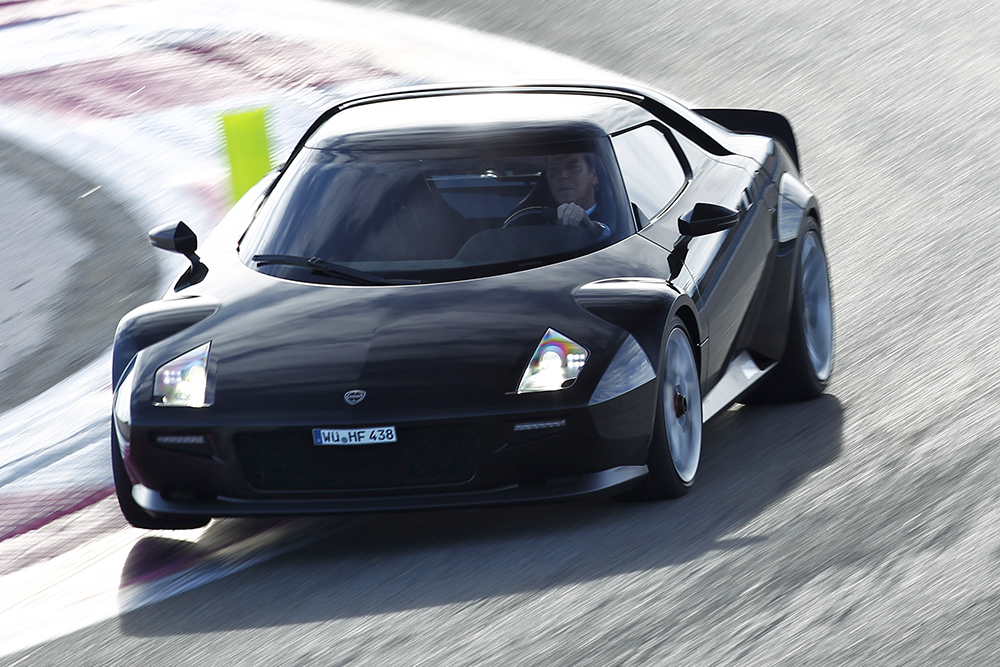 This stunner built by Pininfarina was first shown several years back, and like its ancestor of 45 years ago, this New Stratos is based on a mid-engine Ferrari—in this case a shortened F430 chassis taking the place of the 246 Dino in the original. It used the Ferrari’s 4.3L V-8 too—tweaked to 540hp! The project has remained one-off design study until this year, thanks to the announcement from Manifattura Automobili Torino (MAT—the company run by Paolo Garella, who headed the project at Pininfarina) which plans to build 25 new Stratus models. The New Stratus will be offered as a road car (like the prototype), a GT-class road racer, or—get this—a “Safari” rally-spec model! No final word if the limited production Stratos will still use Ferrari mechanicals, but the data sheet MAT released still does list a 4.3L V-8. 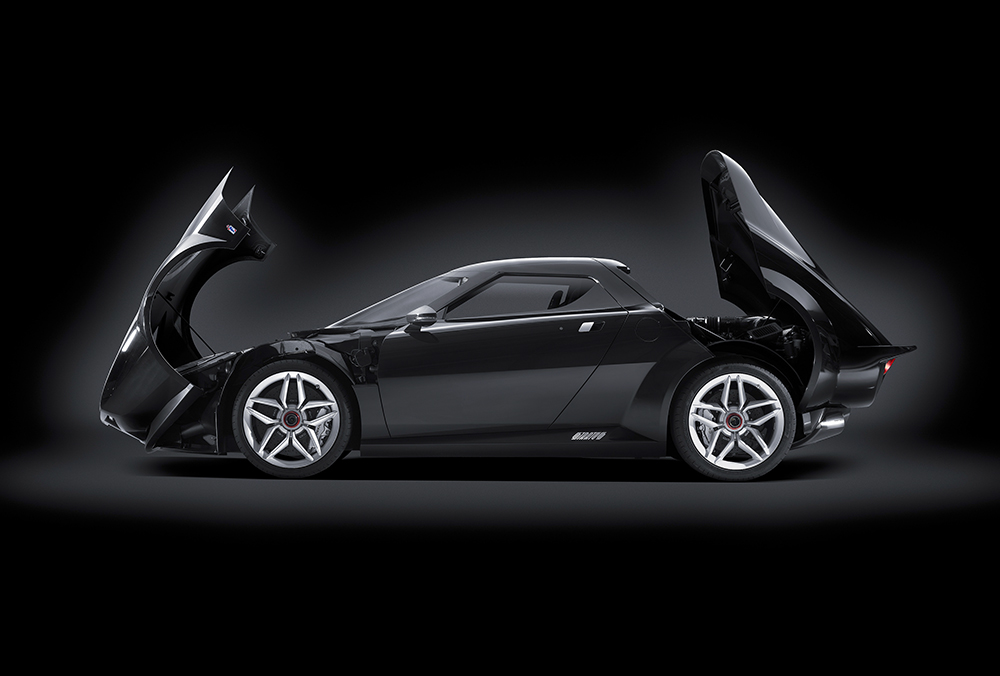 The three versions will officially debut next month in Geneva, but Oh My God! some diecast manufacturer simply must sign on to make replicas of all three! 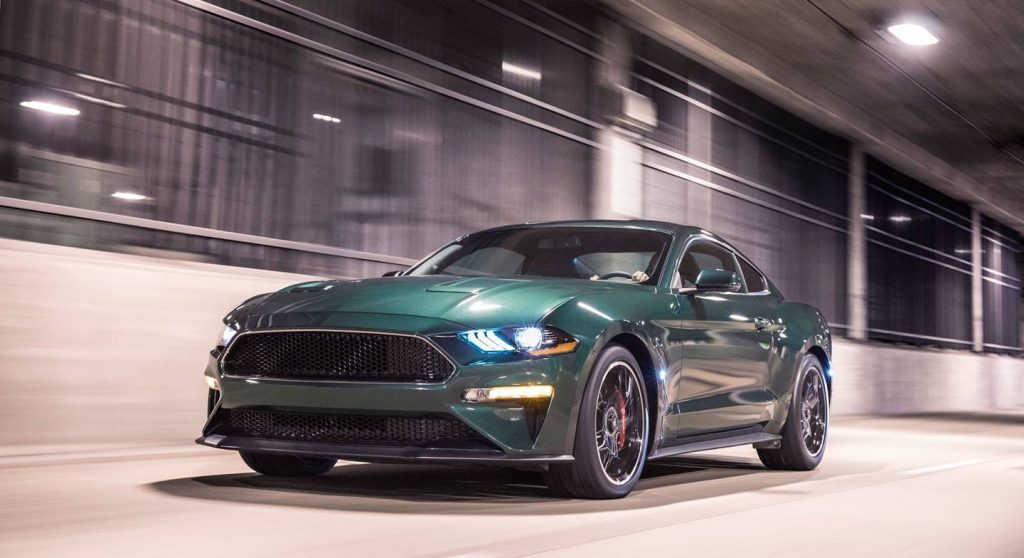 Technically Ford is releasing it later this year as a 2019 model, so some might quibble that that makes it the 51st anniversary of the 1968 original, but since it will be here just about 50 years to the day from the movie’s original October 1968 release date, we’re going with it—and it’s 475 horses pretty much guarantee it won’t ever be late for anything else! We’ve already called Auto World to insist that they adapt their current—and excellent—6th-generation 1:18 Mustang GT casting to Bullitt duty. They were officially noncommittal, but we’d be surprised if if they aren’t already looking closely at this one! We have much more on the Bullitts—new and original—HERE and in the upcoming issue on sale in March! 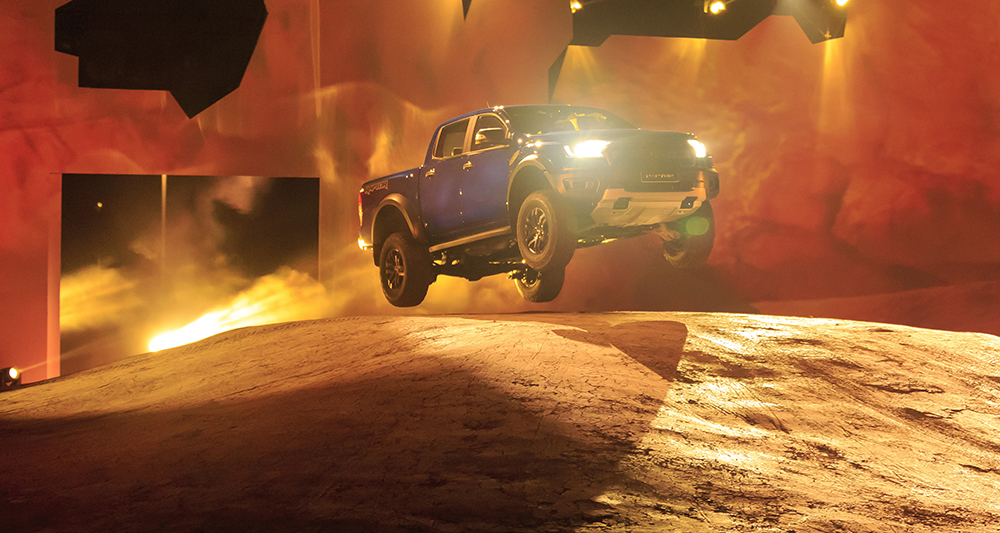 Call it the Baby Raptor if you must, but this Raptorized version of the newly revamped Ford Ranger has teeth! The midsize platform is expected to be a big hit overseas, so the model was announced first in Bangkok (hence the right-hand drive) sporting a twin-turbo diesel making 211hp, but expect US-models to get Ford’s 2.7L EcoBoost V-6 (which makes 335hp in the upcoming Edge ST.) 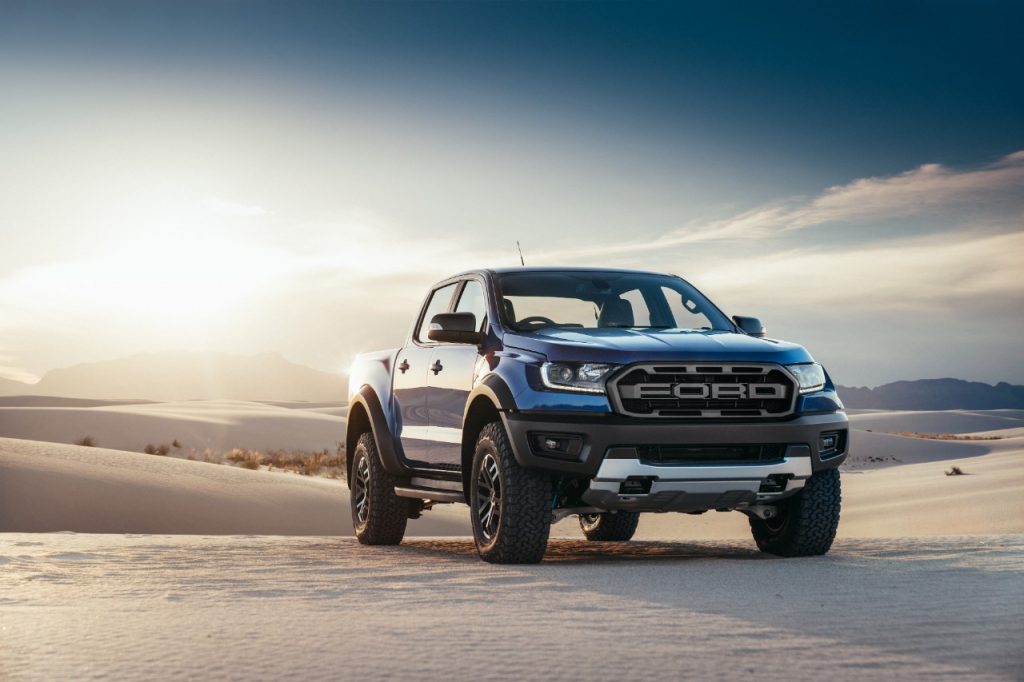 More importantly, the Raptorette will come with Fox shocks standard on its 11-inch ground-clearance suspension, and the body has beefy fender flares to clear the 33-inch tall BFG all-terrain tires. There’s even a gizmo called the Terrain Management System which optimizes performance for any surface on- or off-road. It’s got settings with promising names like “Rock Mode,” “Mud/Sand Mode,” and even one called “Baja Mode!” Maisto has models of the F-150-based big Raptor, so it only makes sense that they be on top of the Ranger Raptor too—and that would open up the opportunity for an Off-Road Kings variant too. But whoever does it, we want one! 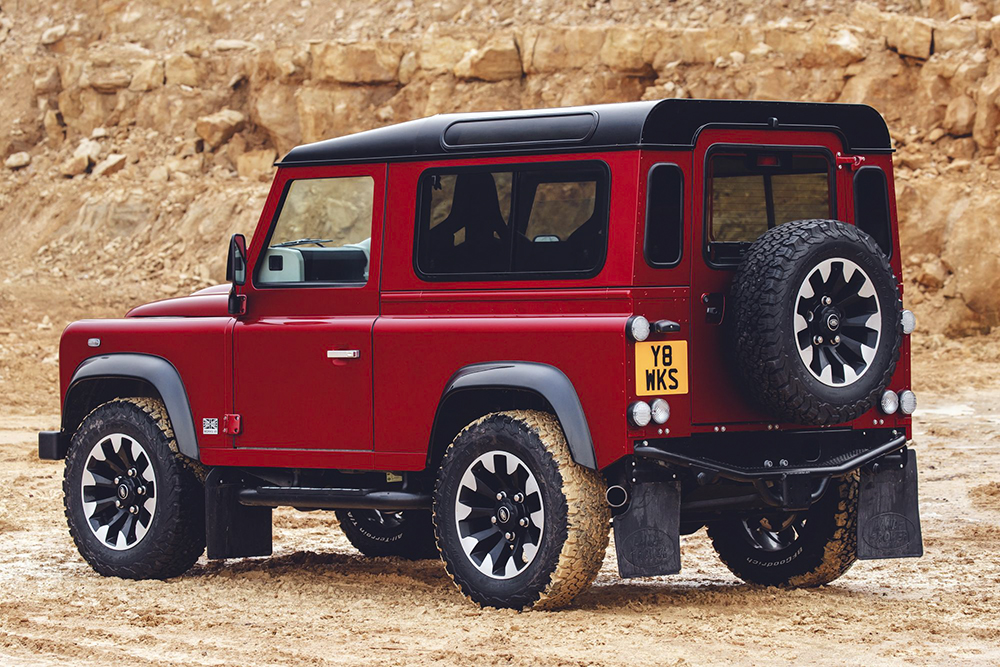 Remember a couple years ago when Land Rover announced they had officially built the very last Defender—the model that could directly traced its roots to the very first Land Rover Series I made in 1948? Yeah, well, not so fast. Actually, we take that back—because if there is one thing the newly announced limited production Defender Works V8 is, it’s fast. Now, this isn’t the first factory-V8 LR. US-bound Defenders got Rover 3.9L V8s in 1994-98, but their 182hp wasn’t exactly tire-scorching. This new version—aimed to tide enthusiasts over until the Defender replacement bows in 2019 (maybe)—comes stuffed with a 400hp V-8 and 8-speed automatic transmission from Jaguar! 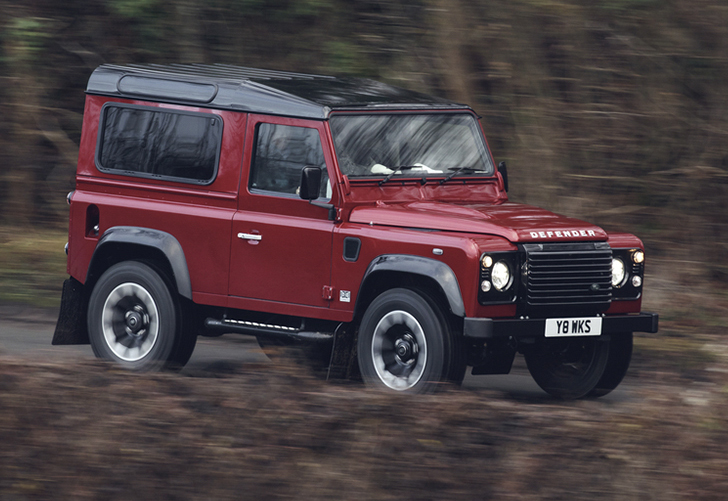 Sure it costs $200K, but it’s limited to just 150 units, it’ll do 0-60 in 5.6 seconds, and it still climbs like a mountain goat! Kyosho did the last three Defender Special Editions, so they’d be a natural choice to produce this one. Dorlop and Century Dragon collaborate on stellar 110 Defender castings, so a long-wheelbase Works V8 would be welcome from either of them. 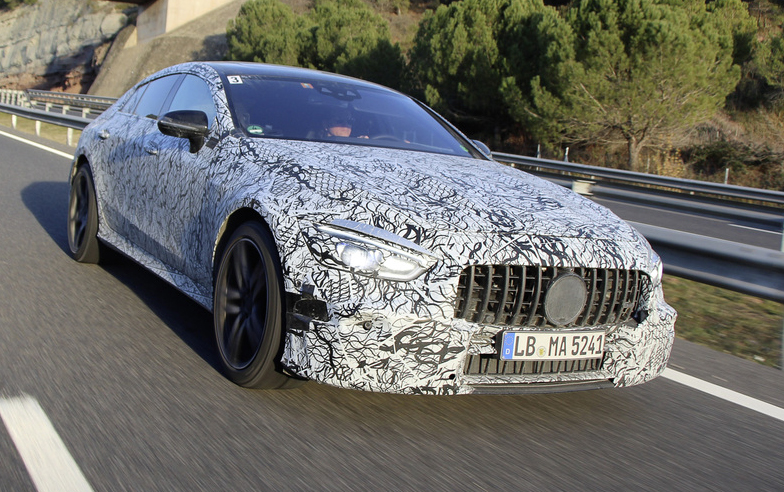 Ok, we’re taking this one partly on faith, because thus far only camouflaged versions of this new super sedan (or 4-door coupe if you go by Mercedes’ preferred nomenclature) have been officially released ahead of its premiere in Geneva.

Things we know: it will be based on the E63 S architecture, and will share its variable all-wheel-drive system, transmission, and its herculean 604hp twin turbo 4.0L V-8, so it’s going to be savagely fast and handle much better than a car its size has any right to. 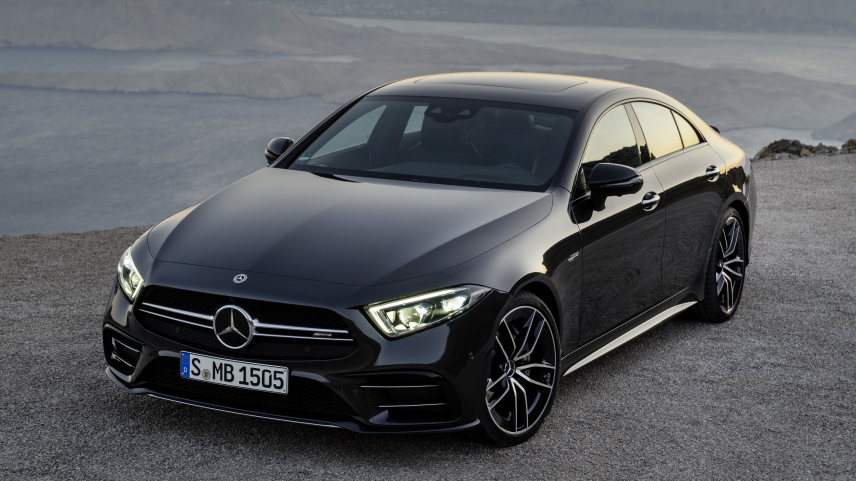 Things we guess: Based on the name and the family resemblance visible even in the disguised photos, it is going to share the GT coupe’s beautiful, tradition-rich visage. Given that Mercedes just introduced an all-new CLS 4-door “coupe” (shown above) on the same platform, and so far the AMG version tops out at 450hp, so we’re guessing the 4-door GT may actually slot in as the top-option CLS variant (without the name.)

Where ever the 4-door GT fits in the lineup, we want a model! AUTOart makes a stellar GT Coupe so it would be our first choice for manufacturer.