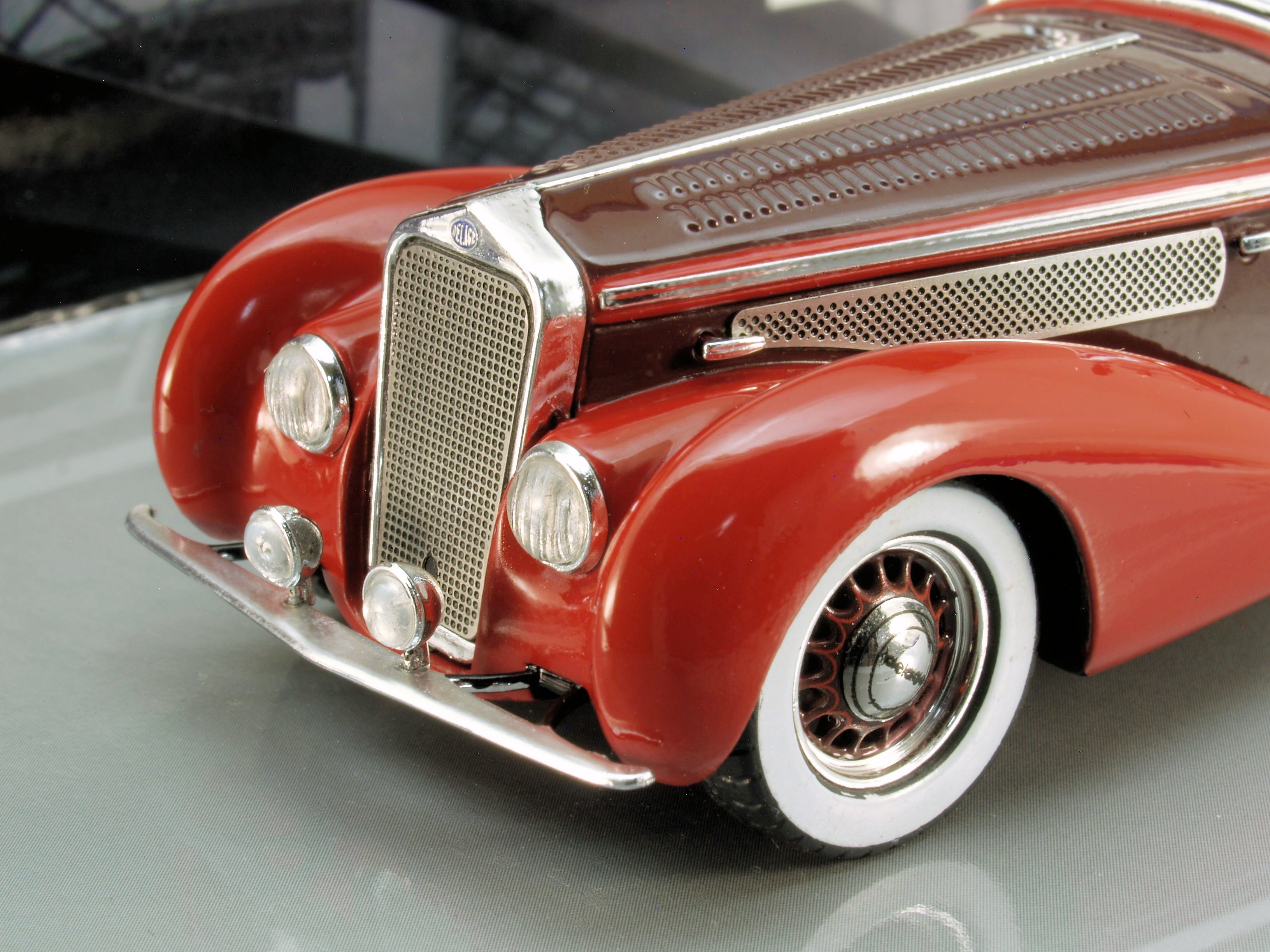 Henri Chapron couldn’t have dreamed the real life story that would be written around the creation he delivered on June 21, 1939; Delage D8-120 chassis number 51760 had been fashioned into a cabriolet with an eight cylinder engine of just over 115 horsepower, and its mechanicals and frame were of the latest design from Courbevoie – lower, lighter, and the perfect foundation for one of Chapron’s most beautiful builds, ever.

Then came the war – and a nasty bit of business involving a French general, the car, crossed loyalties, and an ill-advised shipment by the military man of the car to America before he could secure papers to go there himself. The irony? The car became a hit in Hollywood, starring in the classic film An American in Paris, and the fellow who had appropriated it and sent it there was forever kept from becoming a Parisian in America.

Much like that story, this scale model of that beautiful machine, a la Minichamps, has an irony of its own. A recent interview with Minichamps’ president Paul Lang told of the company’s primary desire – to take the look and feel of expensive, hand-built, low-production resin models so loved by collectors and make them out of diecast in far-flung factories for sale to the masses. It’s a formula that has worked very well, and it catapulted Lang’s company into the stratosphere of the model car world, much to the chagrin of some of those hand builders.

The second irony? Though the outer packaging calls it out as a diecast piece, this beautiful little car – the first offering from the new “Mullin Automobile Museum Collection” –  is a throwback to those exquisitely rendered hand-hewn pieces, crafted out of the same material – resin – and to the same exquisite standard as those models Minichamps sought to supplant all those years ago. They’ve visited the material before, to be sure; parked on a regally large display base with a clear cover, the shape of the car is perfect, and its profile matches the photo of the real cabrio, as printed on the backdrop panel. All of the trim is done in hard parts, using photoetched metal, or cast and plated plastic, and the paint and assembly is extremely good, bordering on meticulous where smaller notes like the eyelash-thin windshield wipers are mounted. The fabric-finish roof is rolled to the halfway point and “secured” with straps; this allows a mostly unimpeded view of the legibly-gauged dash, tiller, and detailed, be-handled door panels and seats. These last bits have been painted and then relief washed, and look very much like lush leather – a nice touch that, again, speaks to more of a hand-built model than a mass-manufactured one.

More of that is evident on the wheels, which have been sharply cast and then pinstriped – impressive – but even that effort pales when the tiny, nigh-on legible coachbuilder’s badge, affixed to the model just ahead of the rear fender on the passenger side, comes into the macro view.

There’s more to see, of course, and the companion release – a 1938 Dubonnet Hispano-Suiza H6C “Xenia” concept car – is equally stunning, for all of the above reasons. Once our heart rate slows, we’ll be covering these in more detail in the next issue of DCX, and you can count on a video of these beauties as soon as time allows. In the meantime, enjoy these first snaps – and stay tuned. Irony has never looked so sweet.