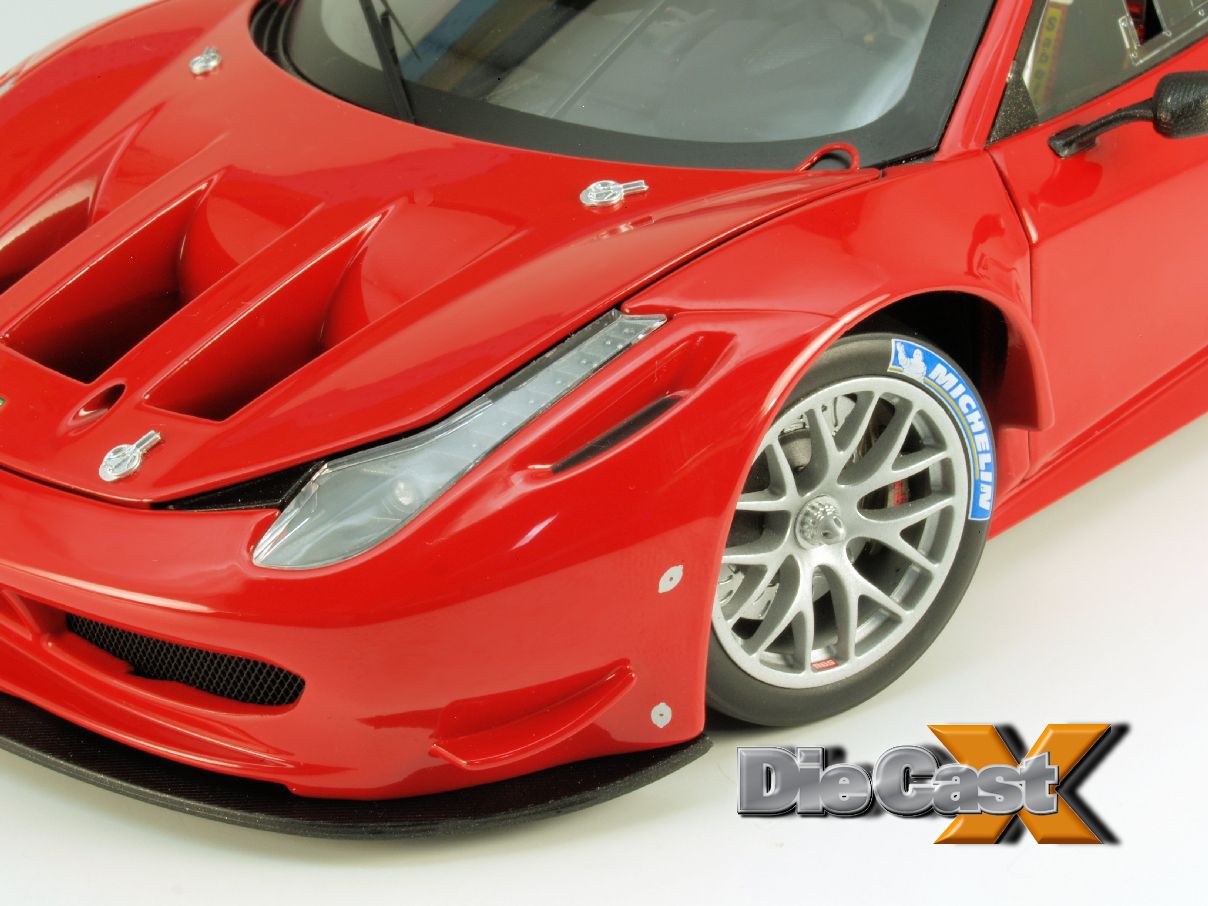 Hot Wheels Elite’s 1:18 Ferrari 458 Italia GT2 “Launch Version” is one hell of an impressive model, for reasons that became apparent while we were taking it (and a pair of race-liveried variants) out of the box from overseas. First – the heavy models were in a newly designed box featuring a proper styrofoam clamshell, a la Minichamps, Kyosho, et al. When we opened those, we were happy to see the cars screwed to the lower halves of the containers. The days of tricky, damage-inviting wires and straps are gone, at least where these are concerned.

Once out of the boxes, the cars were stunning. The GT2 takes the Italia’s already aggressive shape and adds even more in-your-face spoilers and a lowered stance; fender flares around the car’s massive wheels are straight out of a boy-racer’s sketchbook, as is the multi-vented front boot cover and high-mounted rear wing.

It’s all here in the HWE model, and it’s all done with a high level of finesse. The removable boot lid and rear engine cover come as separate pieces affixed to the top of the clamshell; these attach and snuggle onto the car with hidden neodymium magnets. Below these pieces, the 4.5-liter V8 and complex plumbing at the car’s nose are replicated very well, using everything from cast and painted plastic, faux carbon-fiber, vinyl hoses, photoetch screening, and even dyed, clear styrene to reproduce the brake reservoirs on the front bulkhead.

More carbon-look surfaces are inside, as are painstakingly-placed tamped-on gauge and dial detailing. The steering wheel looks like soft foam, and there’s even a coiled wire run between the hub and the firewall – a neat detail that belongs on a car priced well above this one’s sub-$120.00 ticket.

Add this one to our ever-growing video backlog; it’s well worth the camera time, and represents a new level of excellence for a model maker already working near the top of the hobby. Highly recommended.