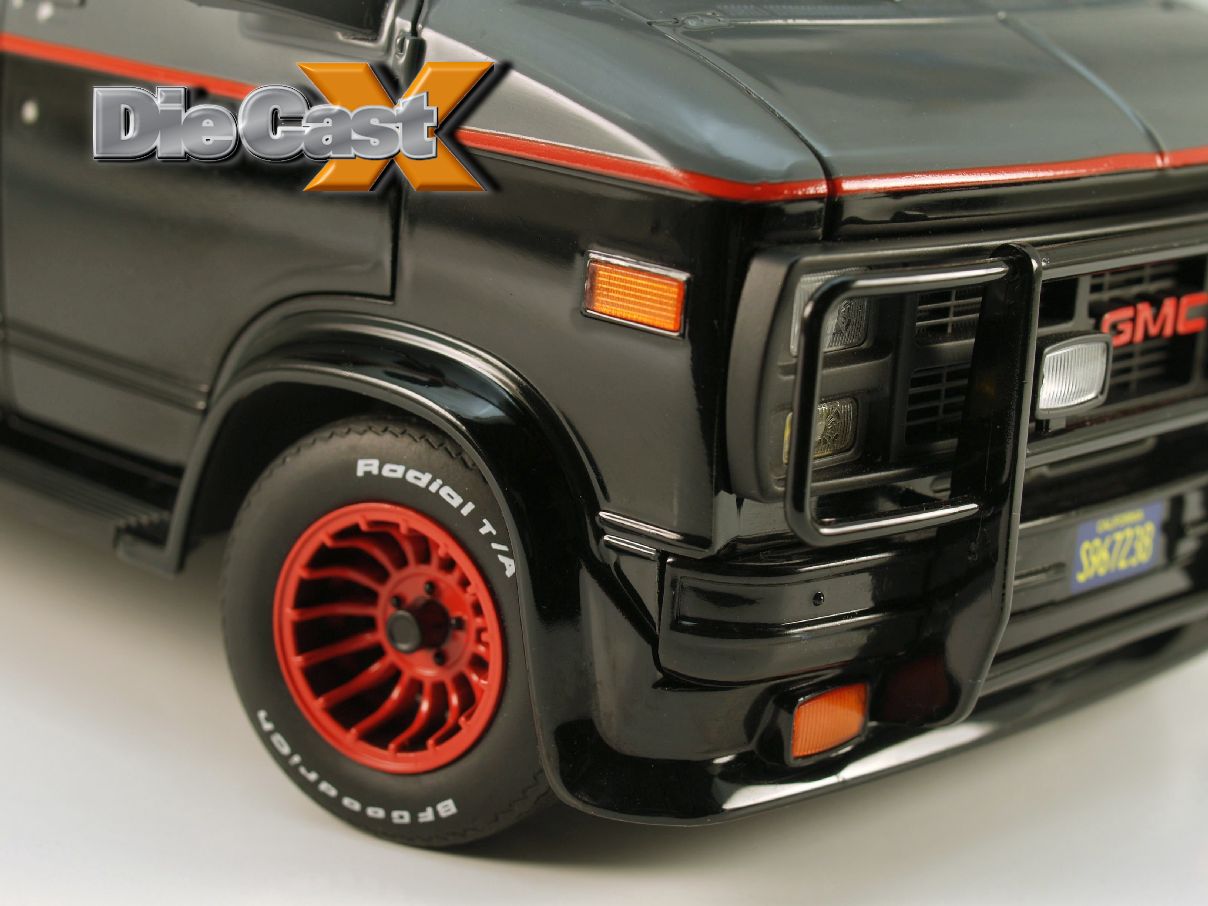 You have to hand it to Hot Wheels Elite. These guys have a knowledge of their audience that rivals Lady Gaga’s – and like the singer, they have a chart-topping talent for knowing exactly what to do and which buttons to press to get the crowds cheering.

Take, for example, this 1:18 A-Team van, the companion to the 1:43 model we reviewed in the Winter ’12 issue of DCX. Deco’d with the unmistakable grey, red and black scheme that we remember from the series’ heyday, it’s got a great balance of working features and visual impact, done to a level that will entertain the core TV car collector, while offering just enough detail to satisfy most 1:18 high-detail fans at a reasonable price point.

The model’s got opening front and rear doors, an opening hood, and steerable wheels, and the big casting has been finished off just like the TV truck. Like a lot of HWE models, this one sports up-market butyrate windows all around – even in the sunroof up top – and the door glass is in the half-down position. That adds a bit of “driven” to the look. There’s a good overall gloss to the van, and the assembly is great.

The add-ons are a treat; behind those outstanding American Racing Turbine wheels the model has steel brake discs, and the deep dish units wear believable BFG radials. The separately cast red, yellow, and clear lensing all around is very well done, too, and it’s accented by finely photoetched wiper blades and steel antennas up above. More p/e is used for the lock cylinders on the front and side doors. Taken alongside the slick show-car paint and those neat fender flares, it’s a very trick-looking truck.

The interior is cool enough; don’t go looking for flocked floors or anything hyper-detailed among the twin rows of captain’s chairs and you’ll be happy. Pop those back doors and you’ll see that Hot Wheels put the cabinetry and the old-school reel-to-reel computer in the back; go forward, and there’s a rack-mounted two-way and speaker setup mounted in an overhead console.

Pop the hood and there’s a decent-enough 350 hanging tough in the darkness. Here’s the cool part: flip the truck over to check out the chassis, and you’ll find the mill’s been wired. The balance of the chassis is more about a proper profile on display than a detailed representation of a G-series frame and workings, and like the 1:43 variant, it’s got an incorrect single exhaust, rather than the box-tipped twice-pipes that the TV truck had ahead of its rear wheels.

Hot Wheels Elite knew, early on, that the main audience for this release was a different crowd than those who collect the company’s Ferrari-licensed replicas. Where the latter group is all about real-aspect hinges, finely turned photoetch pieces, and a level of finish that rivals the high-end pieces they’ll park the Elite models among, the collectors who will make up the bulk of the buying public for this A-Team piece couldn’t care less if the door hinges are dog-legs, or if the side door doesn’t open. They’re here for the overall look of the real truck – which is here, for sure.

No word on whether HWE will offer the van in a “Super Elite” variant; we’d wager that at some point, other decos will ultimately emerge on this mold set. In the meantime, we’re liking the overall look of this one. Love TV cars? Go ga-ga.