DCXMag.com
From the Magazine, Inside DieCast X

Just about everybody has heard of Jack Daniel’s Tennessee Sour Mash Whiskey. Whether you partake in the occasional nip yourself or know the name purely by reputation, it’s one of those iconic brands whose name has become a benchmark for an entire industry. As the distiller of the best-selling American whiskey on the planet, the company has also become the economic lynchpin of its hometown of Lynchburg, Tennessee—a town of barely 6,000 residents.

The distillery and its support operations not only are the area’s largest employer but also have become a tourist destination, which supports numerous aspects of the local economy. A $140 million expansion announced in early 2016 will only increase the importance of Jack Daniel’s to the Lynchburg area. But would it surprise you to know that the Jack Daniel’s facility is so expansive that it has its own fire department? It surprised me. But with an operation of its size whose primary output is highly flammable spirits and given that Lynchburg has a history of catastrophic fire going back nearly as far as the Jack Daniel’s brand itself, it makes sense that the company would not rely solely on local services for emergency response. In fact, it’s just the opposite: The Jack Daniel’s Fire Brigade operates three fire stations in Lynchburg, with a total of 34 personnel who provide emergency services not only to the company facilities but also to schools, public buildings, and the surrounding community 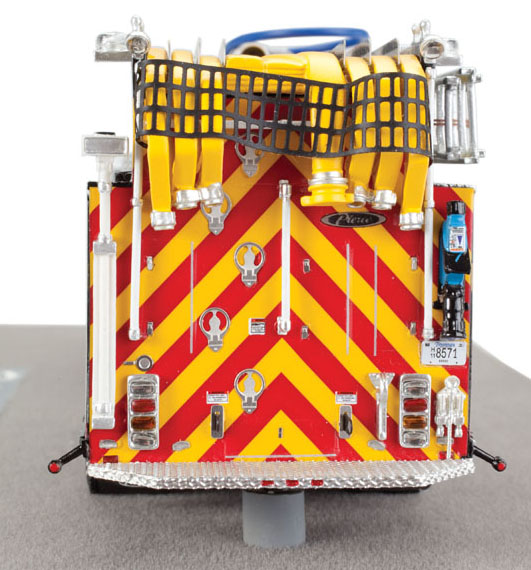 From taillight lenses to etched metal fittings and molded surface details—remember, what you see is in 1:50 scale!

All of that serves as backdrop for the imposing piece of machinery that you see modeled here: the Pierce Velocity Custom Pumper of the Jack Daniel’s Fire Brigade, which was delivered into service in 2015 and designated “P-7.” Let’s call it “New No. 7”! It is among the latest releases from Fire Replicas, the company quickly establishing itself as the leader in precision-scale fire-service vehicles. Like its previous efforts, the Jack Daniel’s Pierce Pumper is 1:50 scale, delivered on a beautiful velvet-lined base with an etched metal plaque and an acrylic dust cover. It should be noted that the base is not removable (at least, not without destroying the base and gravely risking your model!), but since this is about the best presentation you’ll find in the emergency-service-vehicle space, why would you want to? 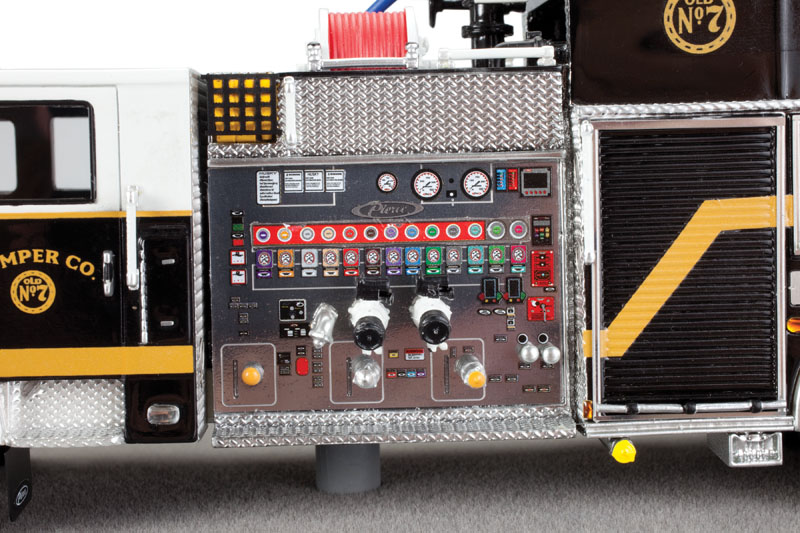 The control panel for the 2.5-inch discharges, chemical, and foam systems is beautiful. Many of the gauges are readable.

Fire Replicas relies primarily on resin construction for its ability to reproduce fine lines and features at 1:50 scale. The company augments that with liberal use of stainless steel and brass in dimensions mind-bogglingly thin and precisely scale—we’re talking hundredths of an inch. At these proportions, the dust cover becomes a safety device as even the most delicate fingers can easily damage the model. If you’re thinking that this model looks bigger than the typical Pierce Pumper, you are correct. That was by specification of the Jack Daniel’s Fire Brigade; it ordered a one-of-a-kind truck outfitted with custom equipment and capacity. Among the specialized items are six 2.5-inch rear discharges designed to interface with an elaborate system of standpipes integrated into the distillery, bottling, and storage facilities. You can see the brilliantly detailed gauge panel for them on the left side amidships—in many cases, with instruments you can actually read. The Pierce rides on a single axle up front and a pair of dual axles out back—with nicely detailed wheels and tires all around. The model’s wheels have a matte metallic finish whereas the full-scale truck’s are chrome, but the molding is spot-on and the tires have accurate tread and contour.

The velvet-covered base on which each Fire Replicas model sits makes a beautiful presentation, and fits perfectly to an acrylic dust cover.

Up top, there are molded hoses for the discharges, layered into channels separated by thin etched metal guides. You can see just a hint of the glue in the seams that holds these in place—it’s literally the only blemish on the entire model that I’ve found. Just in front of the hoses is a turretlike contraption with an intricate set of valves and a secondary foam hose that Pierce refers to as an “8-inch Hydro-Chem deluge gun and nozzle”! The name alone makes it the coolest feature on the truck, but it’s also impor­tant for a vehicle that must deal with a wide range of flammable substances—some not safely treated with water. Complementing the standpipe water system and 3,000 gallon-per-minute pump is an onboard 500-gallon water tank; a 2,000-pound dry chemical system; and another 2,000-gallon foam tank for the Husky 300
foam system.

The interior has received some attention as well, although given that this is a sealed model, it is understandably less detailed than the exterior. It’s the intricate trim on the truck’s various surfaces that impresses the most. That’s where the stainless steel and brass pieces really shine (so to speak). Grab handles, access panels, what seems like acres of amazingly fine-pattern diamond plate—the surface detailing is crazy! Just have a look at the mesh in the grille. While you’re at it, take a moment to admire the fine lensing in the headlights and markers. Out back, the taillights are just as good, and they are complemented by etched pieces for surface detailing and tow loops. And the stainless-steel ladder mounted to the right side is a work of art with its finely etched details and a scale rope tie to secure it.

Final Thoughts
Every Fire Replicas model is a study in precision and attention to detail, and the 423 individual parts on this truck are certainly no exception. By coupling that craftsmanship with the brand-recognition of Jack Daniel’s—and the backstory contained therein of its very own fire brigade—the company has created an added level of interest to an already compelling model. The manufacturer told me that it expects the Jack Daniel’s Pierce Pumper to be its top seller of the year, and I believe it—the planned 600 units are sure to sell out.
This is a fun model of an amazing piece of machinery. So here’s to Fire Replicas for another stellar model!

A Legacy of Service
Jack Daniel’s proudly traces its history all the way back to the first distillery in 1875, but believe it or not, there’s another truck joining Fire Replicas’ growing catalog, which pays tribute to an organization that goes back even further. Arguably the most famous and revered fire company in the world—the Fire Department of the City of New York (FDNY)— was founded 10 years before Jack Daniel’s, and is officially celebrating 150 years of service. To honor that milestone, New York City’s marketing and tourism organization partnered with Ferrara Fire Apparatus to refit and refurbish one of the city’s Ferrara HD-100 Aerial Ladder trucks, giving it a custom tribute paint scheme that was debuted at the New York International Auto Show in April 2016. Fire Replicas’ meticulous artistry is again on display with its model, which measures more than 9 inches long and comprises 496 parts. The highlight is surely the stainless-steel and etched replica of the 100-foot ladder that sits atop the truck. Its sections measure an astonishing 0.6mm in thickness! Like the Jack Daniel’s truck, it comes with a display base and dust cover, is limited to 600 pieces total, and retails for the same $309. And like the Jack Daniel’s Pierce Pumper, the FDNY150 Ferrara Ladder is sure to sell out.