[Editor’s Note: This story was originally published in 2012 when DCX’s Mike Zarnock visited with George in his custom shop in North Hollywood. We present it again here as we bid farewell to one of the greats–a brilliant designer, consummate showman, towering automotive world personality–and a man that was never too busy to share his enthusiasm with fans the world over. Enjoy this look back with us as we pay tribute to the late, great George Barris, the King of the Kustoms, who passed away on Nov. 5th.]

An afternoon with George Barris

He may have penned the design for the world’s most recognizable automobile, but few living legends are as accessible to their fans as George Barris. Elfin, outgoing, and positively beaming when a pretty car (or lady) comes into view, the bespectacled 87-year-old is a constant presence on the show circuit, as a legendary designer, celebrity judge, car guy of the first order—and a solid friend to the hobby. 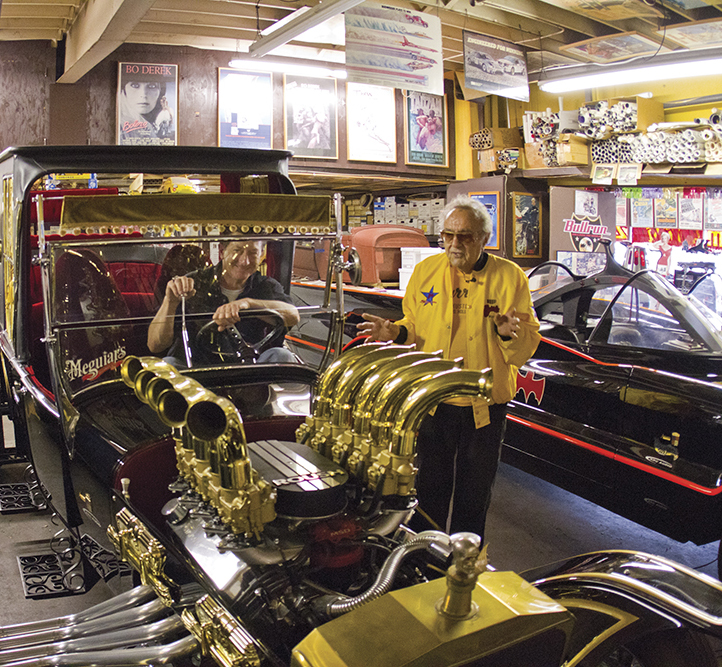 DCX’s Mike Zarnock at the wheel of the Munster Koach with George sharing tales of it and other legendary Kustoms.

Quality time with George at industry events, and conversations inevitably and enjoyably turn to the countless cars that he’s fostered since the mid 1940s. Barris has certainly been around—and it never takes long to find common ground for some easy banter.

As we wheeled our silver rent-a-whale into the back lot of Barris’ North Hollywood shop, we knew we’d be experiencing that camaraderie yet again. We also knew that today’s sit-down would be different. We’d only be touching on the real car side of Barris lore, so that we could zero in on George’s other passion: collecting scale models. If all went to plan, we’d soon be standing in the shops in which entertainment history had been made… we would get to see, touch, and most likely sit in the very automobiles that had blown our minds as kids… and we were going to talk to their creator about his toys.

By the time the door opened, we were in full geek mode. None of us could stop grinning, not for a moment. 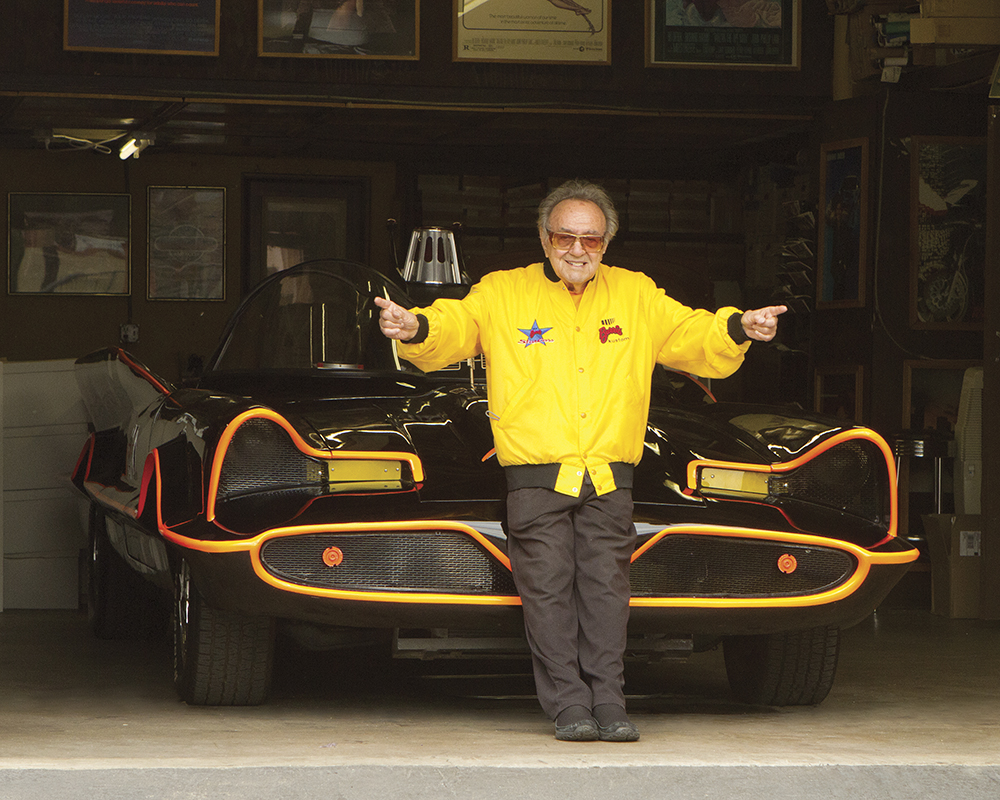 George with his most famous creation.

George Barris’ inner offices are jammed floor to ceiling with toys and models, and the spread of rooms makes for a shrine of sorts to the designer’s life. Virtually nothing is kept in cases, and with few exceptions, nothing is labeled. It doesn’t need to be—Barris’ mind is razor sharp, and he knows exactly where each piece belongs, where it came from, and how it came to be. 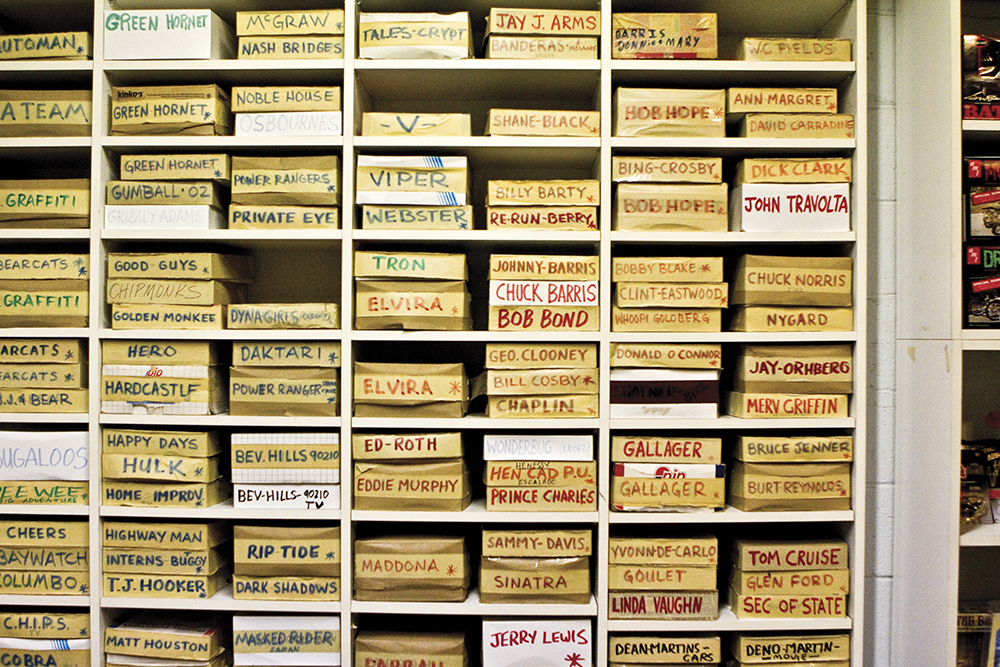 Just a glimpse of the awesome archival material in George’s North Hollywood shop.

Barris knew that it took savvy marketing to get those models into the hands of collectors. In their heyday, AMT had that talent in spades, and the Barris 3-in-1 kits— some original copies of which reside, built, in all their dusty glory on the office shelves—still cause George to smile.

But it’s diecast that has George talking these days. He pointed at a cluster of current diecast movie cars and street machines, and picked out a couple. “You can see I’m a bit of a toy freak… but if you couldn’t afford a Cobra, or a BMW, you (could) take a diecast, and put it on your desk. The hobby kits, you have to put together, but the diecast, it’s done, it looks beautiful, it’s all correct, and they keep adding more and more (features), which is important, too.” 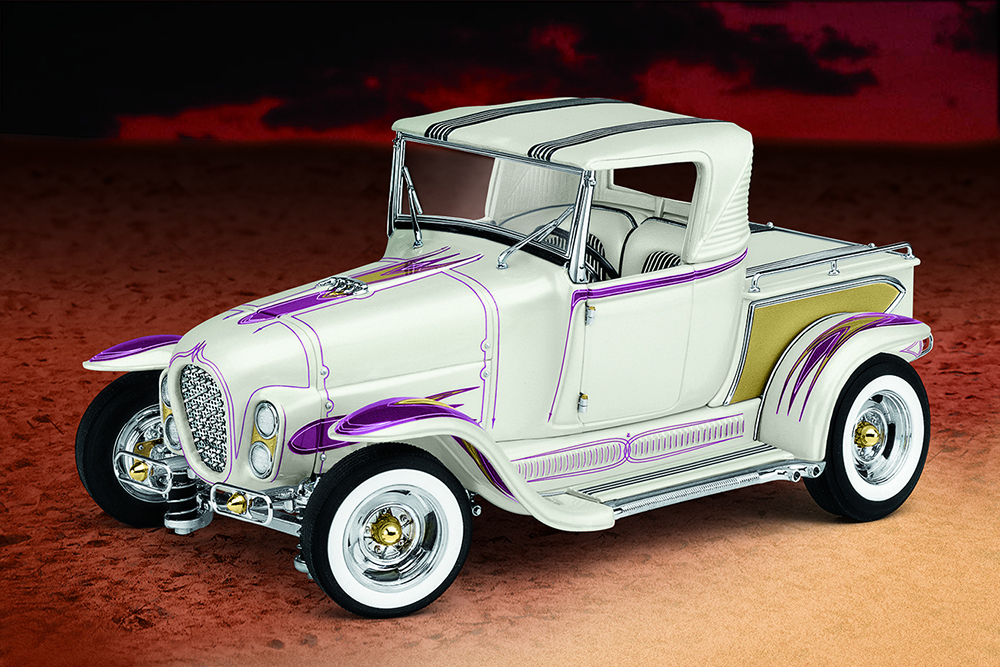 One of the many gorgeous diecast models patterned after Barris creations: Danbury Mint’s 1:24 Ala Kart. 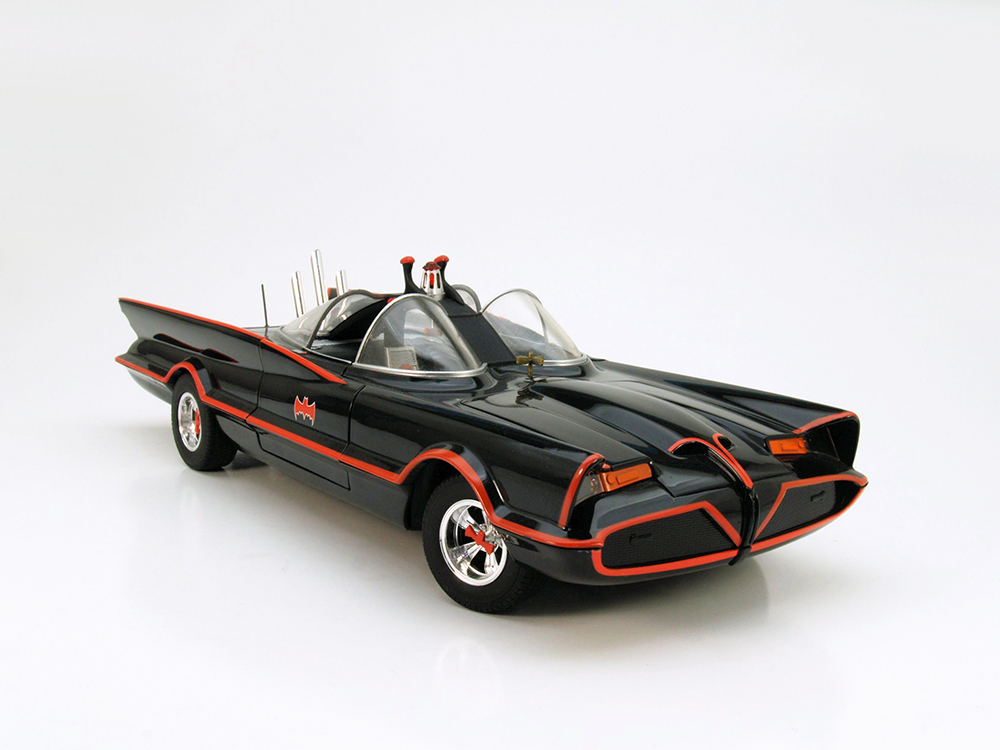 When Hot Wheels finally secured the rights to do the original Batmobile in 1:18 they packed in enough detail to impress George himself!

Of course, there’s one car in particular that any exchange with George Barris must gravitate to, and his innermost office bears proof that you can never have too many Batmobiles. The windowless chamber is positively infested with the winged things, in so many different configurations, iterations, scales and colors that we couldn’t keep track of them all.

From off-the-shelf retail versions to one-off homages sent to Barris from fans of all ages and skill levels, some of the replicas are killer, some sport glue smears, and some … well, they’re downright crappy looking. But here, in the same room where Barris’ original sketch for the car hangs, all reality is suspended. So are square feet of Bat-themed accessories on the walls: Batman crayons, Batman action figures, Batman birthday candles, Batman hand puppets, Batman Christmas ornaments, Batman Pez dispensers, and even an assortment of eye-popping stereoscopic Viewmaster reels from the original show are on display. 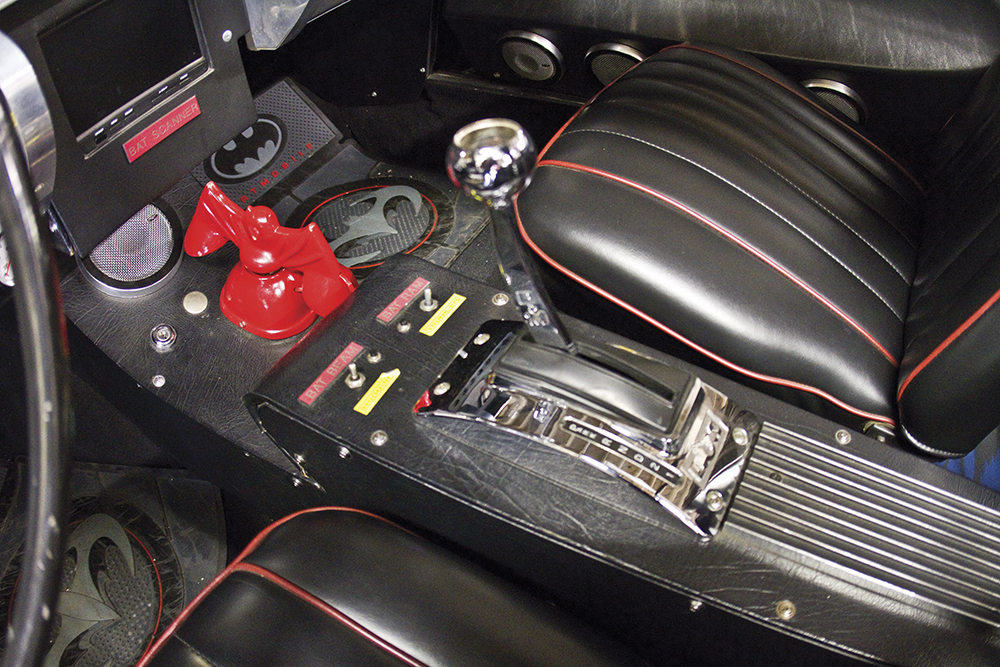 Once the video shoot was wrapped, George ushered us past the replica James Dean Porsche 550 Spyder and Knight Rider K.I.T.T parked in the showroom, and through a pair of doors at the rear. Something happened as we crossed that threshold; four adult males magically became kids wearing grown-up clothes and skin. Under the lights, in a garage scented with the ghosts of gasoline and lacquer, the Batmobile—in this case, the second one built for television production—sat silently gleaming next to another heart-stopping machine, the calliope-piped Munster Koach. 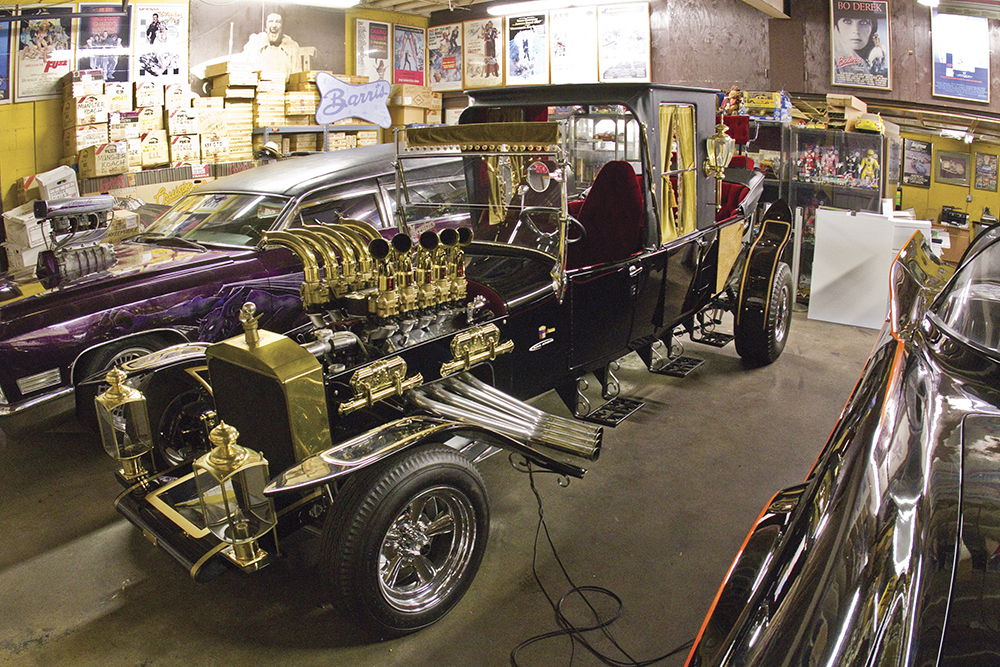 A third stall was populated by a Barris creation called “Kargoyle”— a late ’60s Cadillac Hearse with a chopped roof and a blown engine. 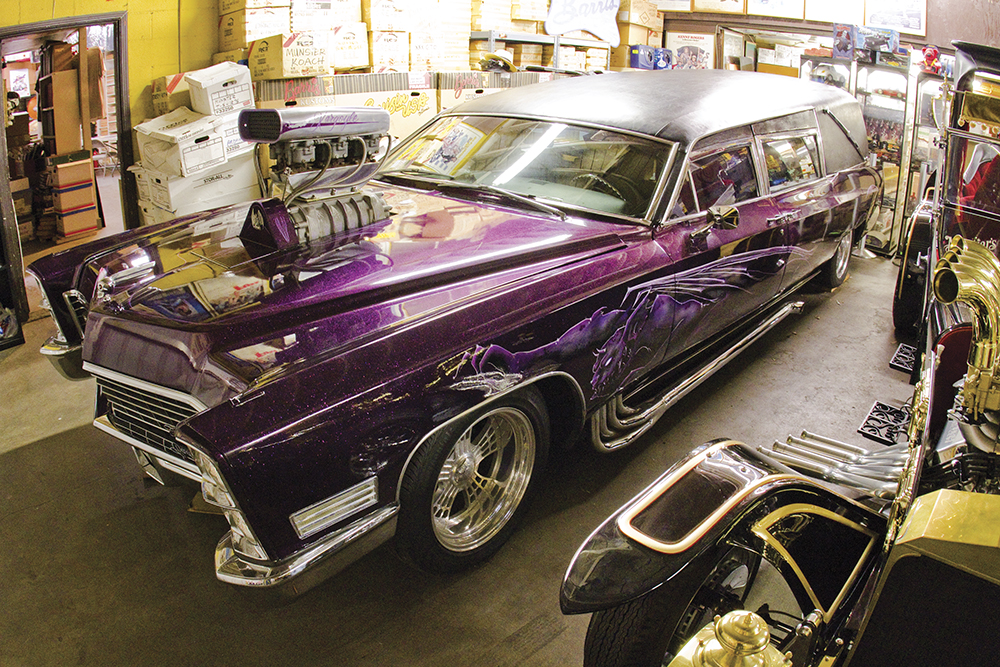 Kargoyle. What a way to go!

As the man himself pressed hidden switches and turned handles with an Oz-like flair, we got the chance to sit in the cars, and hear firsthand accounts of each machine from the man who had made them real. To a van full of guys who had once spent hours glued to the television hoping to glimpse them rolling past, the experience of seeing these icons with their doors open, in the very spot where they were born, was a moving one. We were being beckoned to see, sit, and soak them in, and at every turn, George Barris was there, smiling and enjoying our delight. And that’s when it hit us: for as long as many of us can remember, George Barris has always been there, in the glimmer of chrome, the sparkle of a metalflake, or the long, low whine of a turbine engine howling into the night. He may not wear a mask and fight crime, but for his contribution to our collective car craziness—and all of those moments when we sat cross-legged in front of the TV with our jaws dropping—George Barris is a superhero. From those big kids in the rented silver van: thanks for the memories, George. 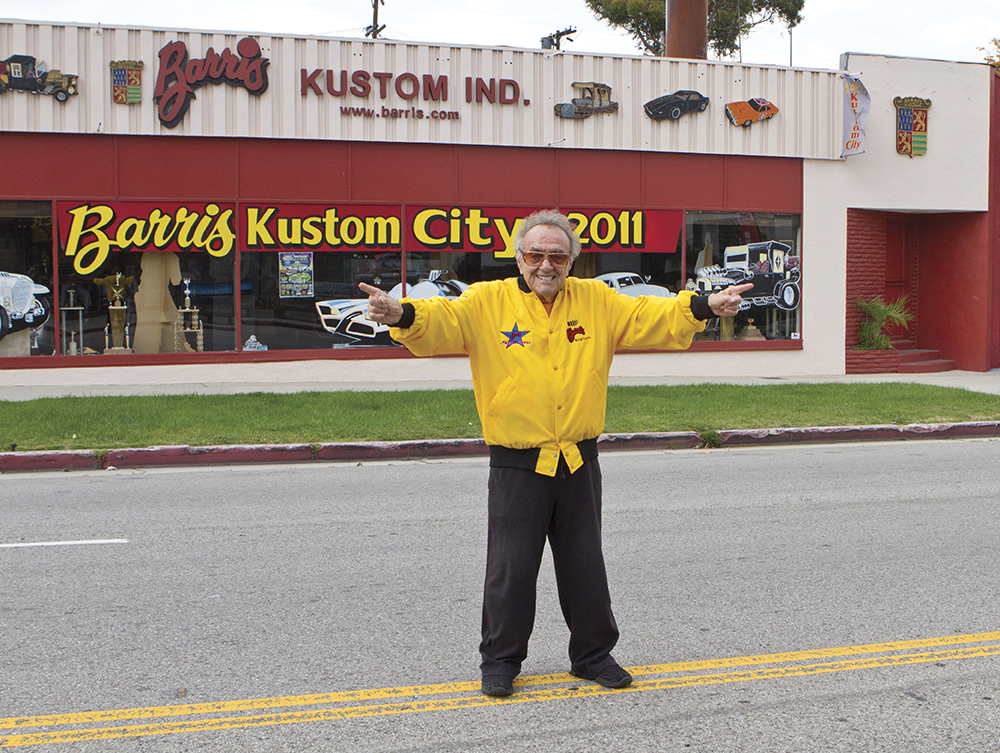 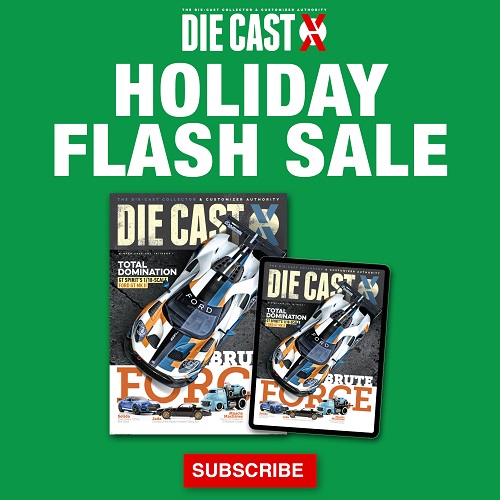