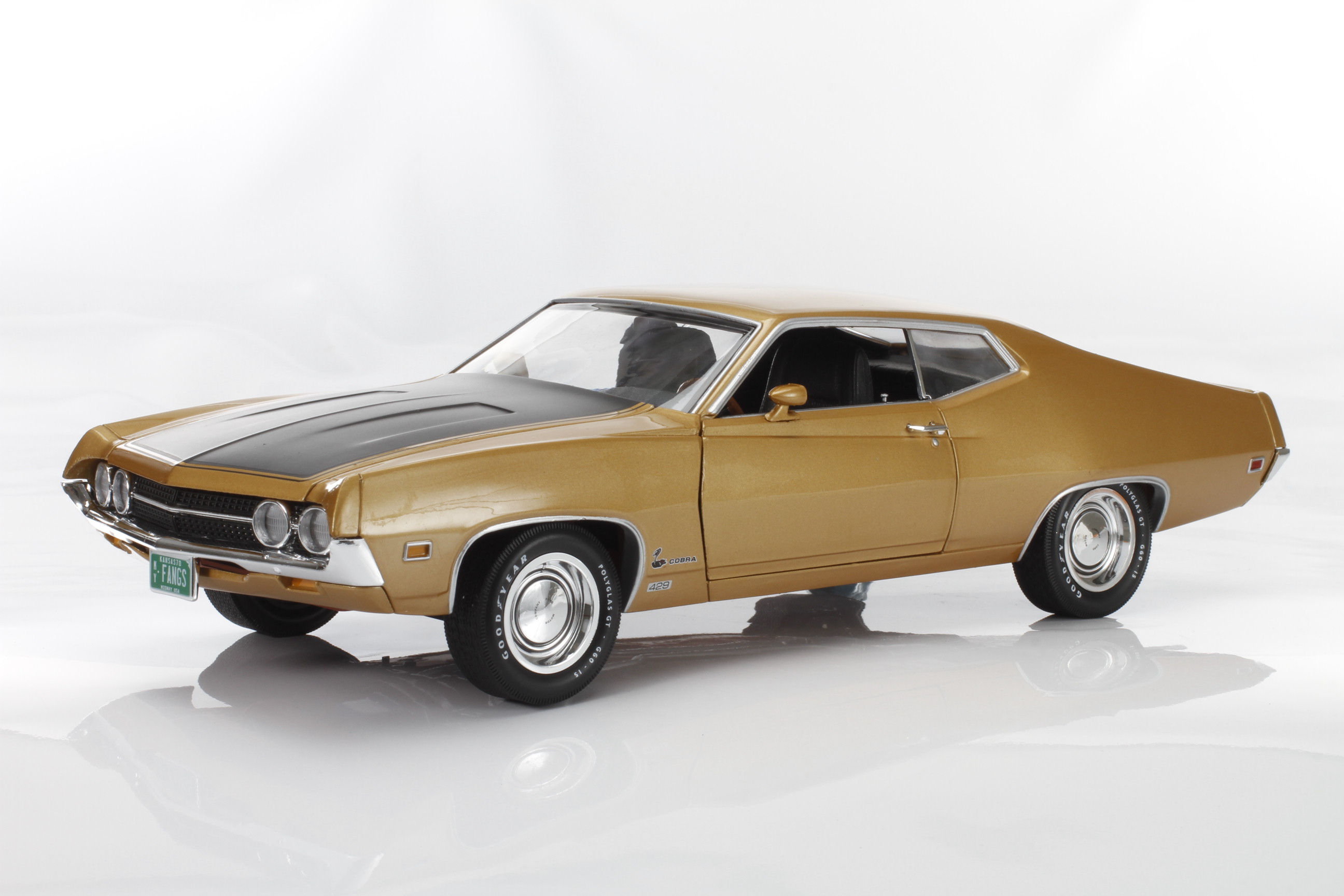 With all the festivity surrounding the Mustang’s 50th anniversary, it would be easy to overlook the other great Ford models that have been coming out lately. That would be a real pity in the case of AutoWorld’s 1970 Ford Torino Cobra, which is based on the American Muscle Torino casting of several years back. 1970 was the first year for the revised, heavy-flanked, more aggressively styled Torino. It came in six different body styles this year: 2- and 4-door hardtops, 4-door sedan, station wagon, convertible and the 2-door Sportsroof (fastback.) It is this last that AutoWorld has selected, as it was the only body style for the top performance option Cobra. By checking the Cobra option you got a Sportsroof with the factory “Competition” suspension, a 4-speed manual transmission (a C-6 automatic was optional), front disc brakes and a 429 cubic-inch N-code “Thunder Jet” 360hp big block—standard! You could upgrade the 429 to “Cobra Jet” or “Super Cobra Jet” spec, but all Cobras had a version of the 429, and all were Sportsroofs. 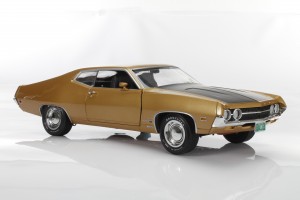 AutoWorld’s example sticks with the base Cobra 360-horse mill, backed by a 4-speed sporting a factory Hurst T-handle shifter. The color chosen is K-code Bright Gold Poly—sometimes referred to as “Freudian Gilt Poly”—one of the all-time great paint names! It has the standard Cobra blacked out hood treatment as well. The paint color is lovely—very rich and with a subtle metallic sheen which looks great on those broad rear flanks. Paint quality is generally good, although there are a couple of pieces of debris trapped under the finish on the left front fender. The window trim is painted on much more expertly than in the old Ertl American Muscle days. The casting is very substantial and the Torino’s dramatic lines are well-rendered, although there are some slight tooling marks around the rear quarter windows. 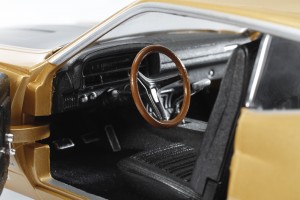 The interior depicts Ford’s black “Comfortweave” upholstery; seats are hard plastic with the appropriate texture and the seat backs fold. Floorboards are covered in finely flocked carpeting and metallic paint simulates the finish in the center console. The same paint highlights the pedal edges and the spokes on the steering wheel, and brown paint replicates the faux wood rim. Decals represent the sweeper-style speedometer and ribbon tach fairly effectively, although the deep recesses and dark color make the instruments a little hard to read. A beautiful Hurst T-handle shifter with a chrome lever and a flat aluminum grip punctuates the interior and really sells the car’s performance feel. 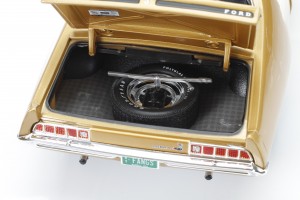 The trunk features a full-size spare and jack assembly. The details look great, but it sits in the center of the trunk floor rather than canted up on the raised portion between the wheel wells like on the real Torino. The trunk mat is a dead ringer for the color and pattern of the real thing! 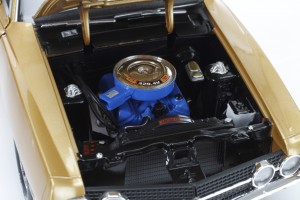 What gives the Cobra its bite is the 429ci engine. The base Cobra engine was the ‘Thunder Jet’—which was sourced from the Thunderbird—hence the name. It emphasized torque, whereas Cobra Jet- and Super Cobra Jet-spec 429s used bigger heads for higher rpm power. The Thunder Jet is recognizable as the model’s engine by its painted (rather than metallic) valve covers and lack of “COBRA” scripts. And considerable effort was made to move the powerplant upmarket from its original Ertl roots with the addition of heater hoses, upper and lower radiator hoses, and numerous decals and warning labels. The engine compartment itself features well-painted accessories (battery, reservoirs, brake master cylinder, etc) and detailed shock towers. About the only thing that reveals the car’s origins are the old-school hood hinges. 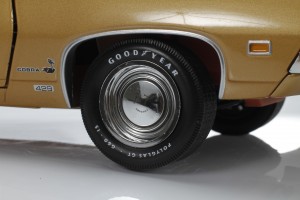 Chassis detail is another huge step up, with body-colored overspray and undercoat replacing the expected flat black. Proper coloration for the dual exhaust, transmission casing and fuel tank presents well too. Suspension includes the proper staggered rear shock arrangement accurate to Cobras equipped with a 4-speed. Goodyear Polyglas G60-15 tires were optional on any 429-equipped Torino, and that’s how AutoWorld has specced theirs, highlighted by wheels with a chrome trim ring and center hubcaps.

All the attention on the Mustang’s 50th anniversary has dominated collector attention this past year, but models like this 70 Torino Cobra prove that there are plenty of other fascinating muscle cars in Ford’s stable. Strategic improvements to this classic casting have upped the detail and appeal. If you’re a Ford guy it’s definitely worth a spot on your shelf!