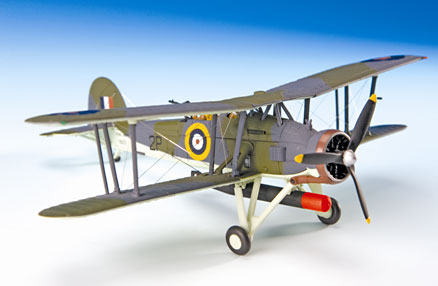 The British Fairey Swordfish was a throwback to a bygone era even when it entered service in 1936. It was the last biplane to see active military service, but it is better known as the plane that helped sink the Bismarck. German officers could not believe such an anachronistic aircraft could threaten their mighty battleship, but torpedoes that each carried when it launched from the British carrier HMS Ark Royal successfully knocked out the Bismarck‘s steering. Unable to maneuver, the German ship was subsequently sunk by the British Navy guns.  Corgi’s 1:72 replica is of one of the Swordfish that flew from the Ark Royal, and the model includes hinged wings so that it can be displayed in flight or as it would appear on deck. Even more impressive are the bracing wires accurately strung on the wings and tail. You may buy this model for its history, but you’ll admire it for its impressive detail.