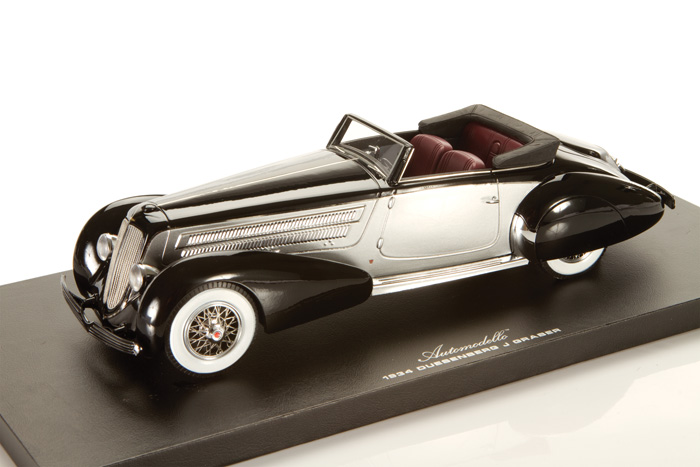 Some would say that a Duesenberg is a one-of-a-kind machine by definition, but this release by Automodello proves that it is indeed possible to have a vehicle that is more specialized and even more exclusive than your ho-hum “production” Duesy! Witness the Duesenberg J Graber speedster. Adapted from a chauffeur driven 1930 towncar version, the car was extensively reengineered and rebodied by Swiss builder Graber Coachworks in 1934. Lower, smoother, more flowing lines suited the machine, which was capable of 160mph—the fastest pre-war road car ever built— not to mention among the most luxurious and expensive!  The car remained a speedster for the rest of its time, and was completely restored in 1998, following which it won “Best of Show” at the Pebble Beach Concours d’Elegance.  The model you see before you is Automodello’s Tribute Edition. It has special black and silver colors with a red interior, limited to just 80 serial-numbered pieces! ( ere is a standard edition of up to 499 pieces in black and blue that retails for $299.) Automodello.com Diecasm.com