The Executive Muscle Car
Gran Sport Buicks always had something of a dual personality, but with the introduction of the 1970 model that took on a Clark Kent/Superman aspect. It was in that year that GM brass—tired of seeing its sportiest models outgunned by Ford and Chrysler products—finally lifted its corporate ban on engines larger than 400 cubic inches in intermediate-size cars. For Buick, that meant 455cubic inches and the most torque offered in any passenger car (save Cadillac)—510 lb-ft. But the American brands were in the middle of a muscle car shooting war; even the relatively subtle and sedate Buick Skylark needed more firepower. Most of GM’s brands offered at least one optional engine upgrade. Buick called theirs “Stage 1.” 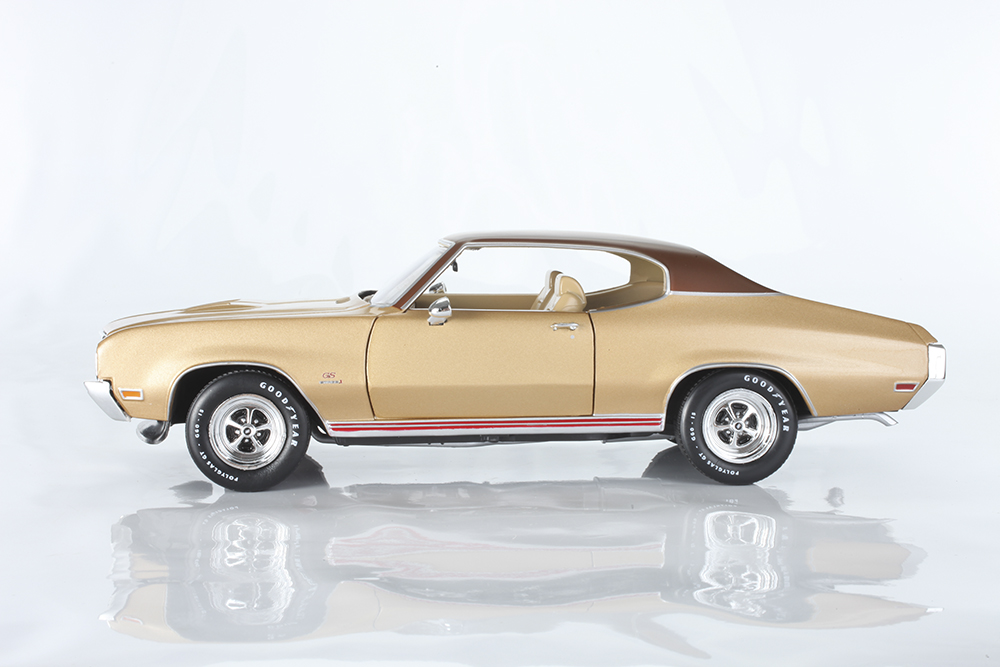 For an extra $115 Buick customers got new heads with bigger valves, more compression, and stiffer valve springs to handle a much more aggressive cam. Buick claimed it added 10 whole horsepower. Time slips suggested the gain was closer to 50—making the Stage 1 one of the great performance bargains of all-time. Best of all, the GS 455 didn’t come with gaudy scoops or stripes announcing its might (Buick had the GSX variant for that). Just a couple modest “Stage 1” emblems on the fenders identified what lurked beneath the hood. It looked like a respectable businessman’s commuter car—until that man got down to business on the loud pedal and ripped through the ¼-mile in just over 13 seconds at better than 100mph! (If you’re keeping score, that’s Hemi Mopar territory.) 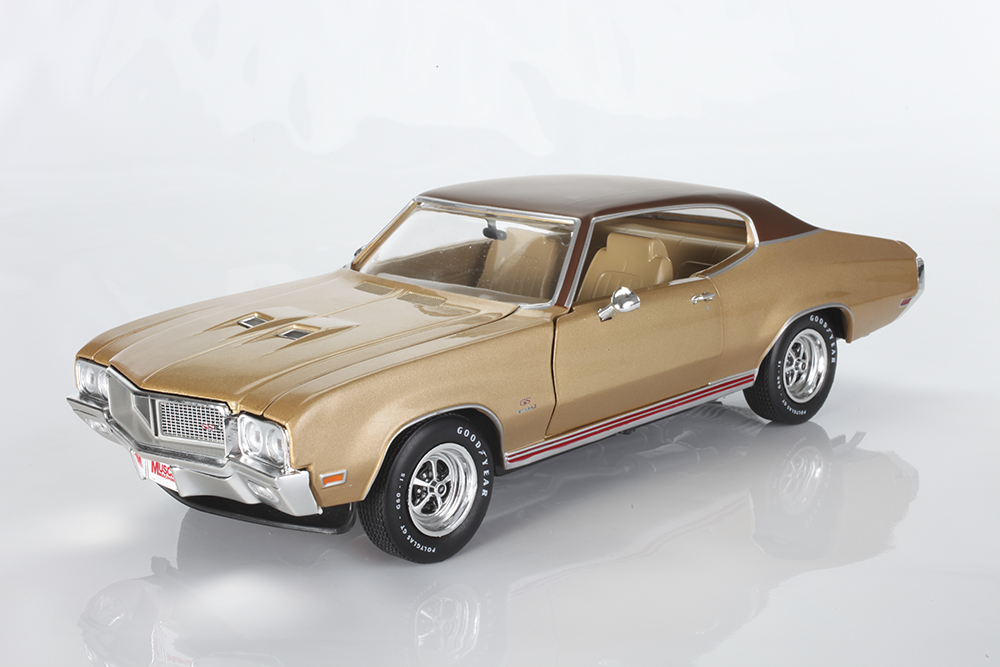 Auto World captures the dual nature of the GS perfectly, with its desert gold paint and simulated brown vinyl top. But underneath that Clark Kent exterior lies the heart of a superhero in the form of its Stage 1 455, backed by a rare option 4-speed. This is patterned after the exact restored car that won Hemmings Muscle Machine of the Year back in 2006, and it’s a classy combination. This is an update of the old Ertl GS casting, so certain legacy elements remain—sealed trunk and dogleg hinges for example—but the overall shape is very true to the stylish Buick. The window trim and vinyl top moldings are painted on rather than separate parts, but they get the job done.

The interior is rendered in beige plastic with strategic use of metallic paint for trim. As mentioned, this car is unusual for its 4-speed transmission. The tall chrome shifter is mounted in a center console on the model—one of the only deviations from the actual Hemmings award winner, which was a column-shifted automatic. Paint and detail on the dashboard is a definite area where the model has been upgraded. 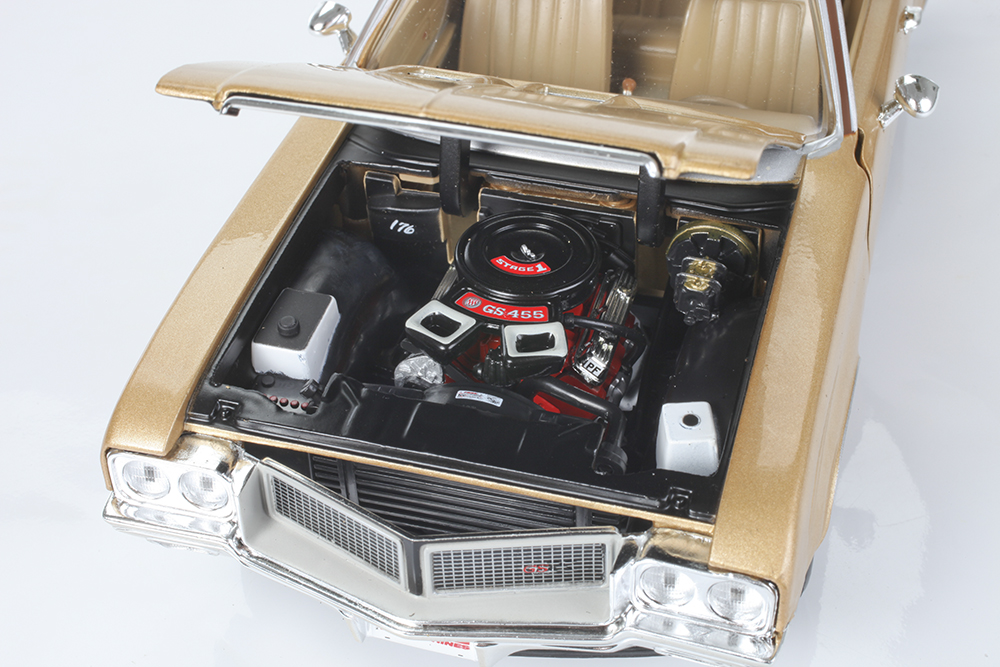 Under the twin-nostril hood sits the top-option Stage 1 in all its glory, and Auto World really stepped up the game on the big Buick mill; paint, decals and lots of detail on the distinctive cold-air induction system on top that is ducted directly from those hood scoops. The fluid reservoirs, battery and brake master cylinder have nice paint work as well. The chassis plate is a legacy piece, but it too has been treated to enhanced paint treatment on the front and rear suspensions, exhaust system, and gas tank. Likewise the wheels; they’re the optional 15-inch Magnum 500s wrapped in wide G60 Goodyear Polyglas GTs, and they look very sharp. 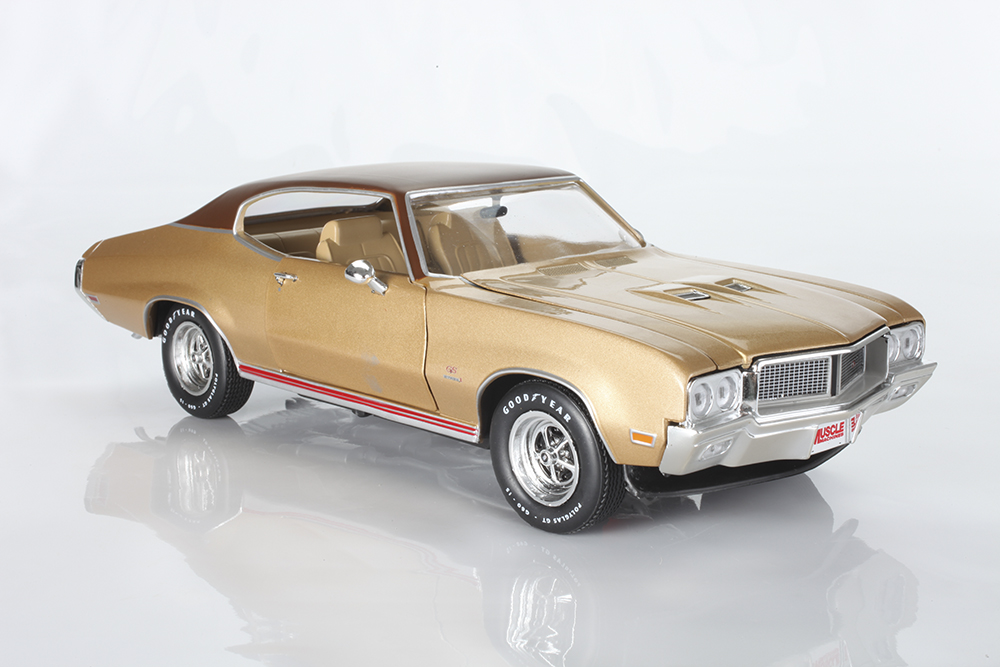 The Buick GS 455 Stage 1 is the ultimate executive muscle car: upscale and classy, but with a brute of a big-block that also made it one of the fastest performance cars on the road in 1970. It’s nice to see Auto World has given it upgraded detail to freshen a casting that has been a favorite of collectors for many years. It shows its age in a couple places, but overall the Buick delivers where it counts. If collecting high-performance muscle is your interest, the Auto World Stage 1 GS needs to be on your list.