Imagine the drama brewing in the halls of Chrysler HQ as product planners contemplated redesigning the legendary ‘68-70 Dodge Charger. That model with its now iconic Coke-bottle shape was an instant hit, raved over by reviewers and setting and resetting sales records in its first two years. But the Detroit standard product cycle at the time was about 3 years, which meant the Charger was due. Add to that increasing gas prices, insurance rates, and tightening emissions and safety standards and the decision was made to thoroughly revamp the Charger for ’71. 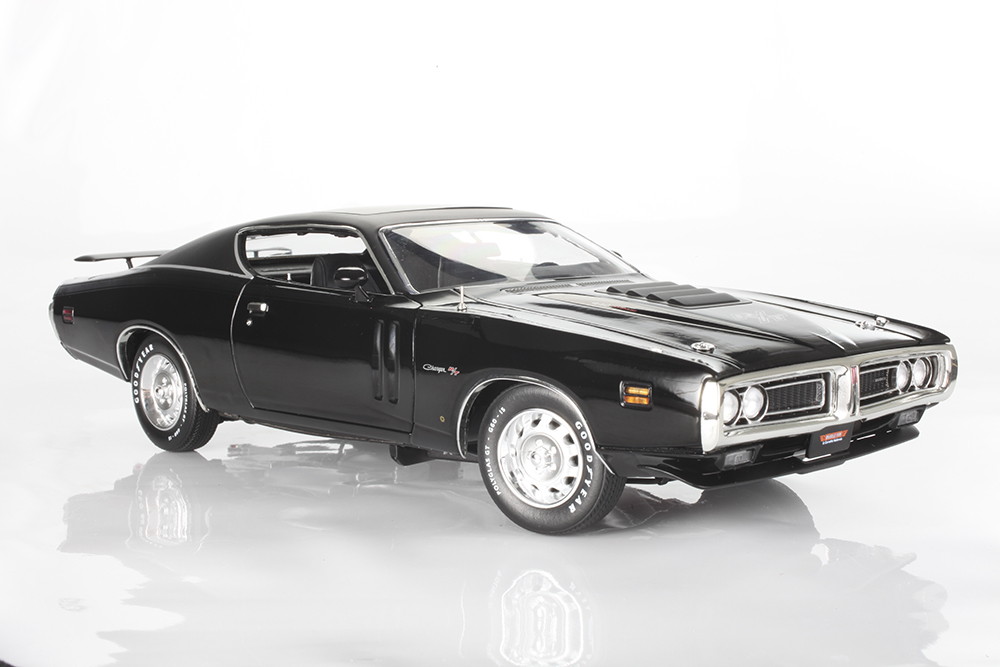 It was decided the car should be smaller so two inches were sliced from the wheelbase (from 117 to 115.) The car was lower too, and the shape was much more streamlined, exhibiting what designers dubbed “fuselage” styling. The Coke-bottle profile was preserved; if anything it was now more pronounced with the roofline sloping to meet dramatically rising rear fenders. The on-again-off-again split grille was back on for ’71—now combined with a perimeter bumper (either chrome or body-colored, depending on trim package), and hideaway headlamps were now optional (they had been standard previously.) Car and Driver boldly proclaimed it “far and away 1971’s best styled new car.” High praise indeed. 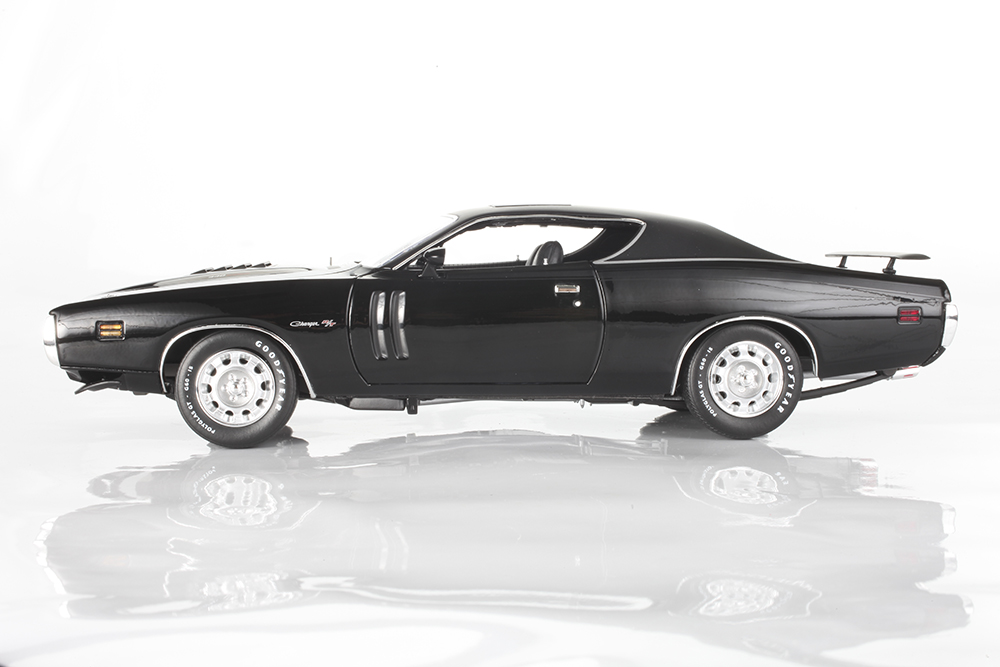 There were four distinct trim levels offered above the base coupe and hardtop Chargers—the 500, SE, R/T and Super Bee. The 500 was the first step up, and you could option one out ala carte to be pretty much whatever you wanted. The SE was the luxury model with such options as leather bucket seats, cruise control, power everything—even a stereo with a built-in tape recorder and microphone! The Super Bee was new to the lineup, having been brought over with the Coronet nameplate when it and the Charger merged models for ’71. It was Dodge’s take on the Road Runner—sort of a budget-conscious sport model with high-impact visuals. The R/T remained the top performance model, with a fair mix of styling and luxury appointments tossed in. The R/T was the rarest (just over 3,000 of the roughly 80,000 Chargers built in 1971 were R/Ts) and therefore garners the most interest from collectors today. 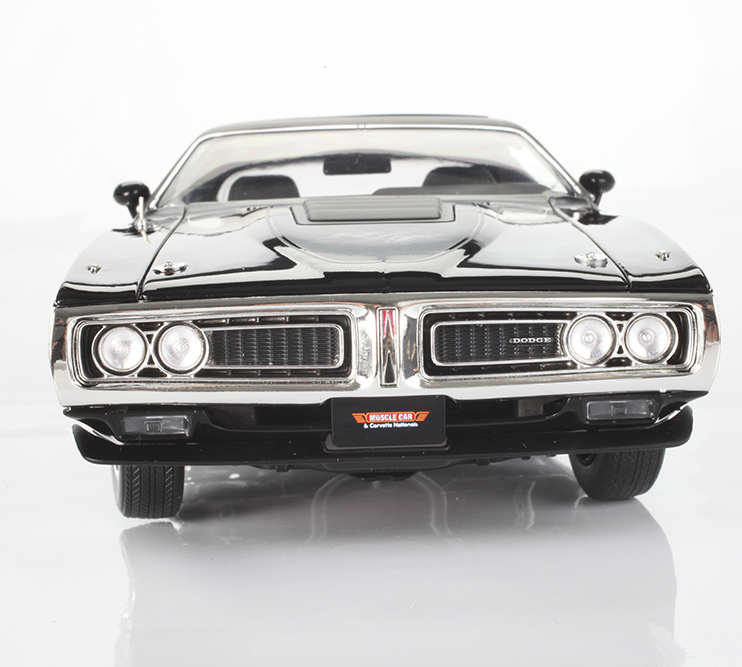 + Rarity of a Sunroof R/T

+ Little Extras in the Authentics Castings 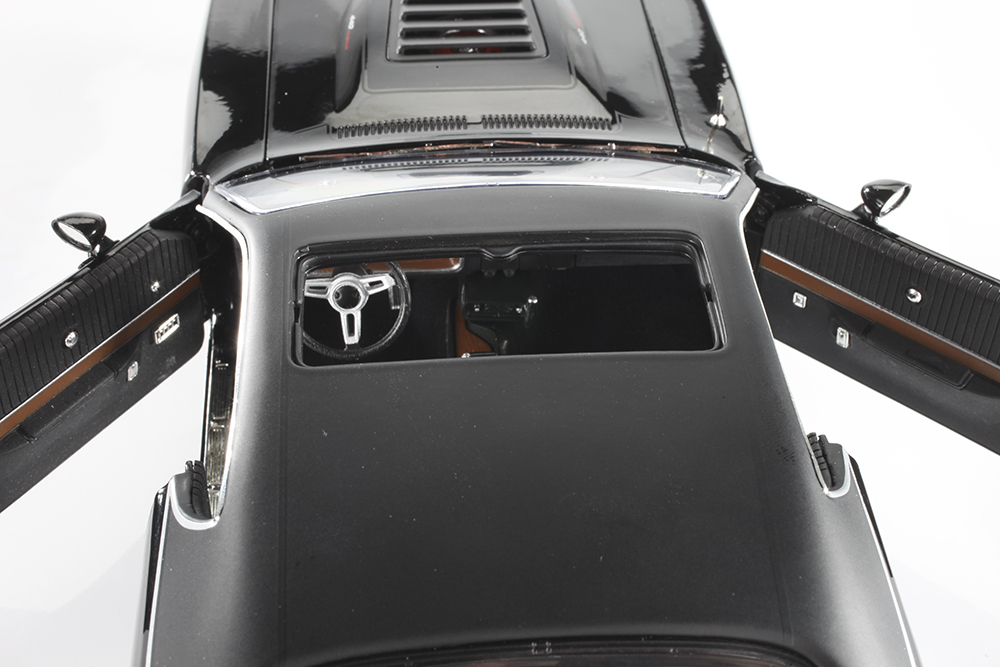 Auto World’s model is patterned after a very specific and unusual R/T that is part of its Muscle Car and Corvette Nationals Show series. At the 2016 MCACN the Wellborn Musclecar Museum sponsored a special class called the “Factory Sunroof Cars Invitational,” of which this particular car was a featured car entered by Tim Wellborn from his own extraordinary collection, which comprises more than a dozen ’71 Chargers! Factory sunroofs were exceedingly rare in this era—it is estimated that just 30 R/Ts came with power sunroof was option code M51 in 1971, and it was available only on vinyl top cars like this quadruple-black R/T (black paint, black R/T stripes, black vinyl top, and black interior.) The model is based on Auto World’s excellent Authentics series tooling. 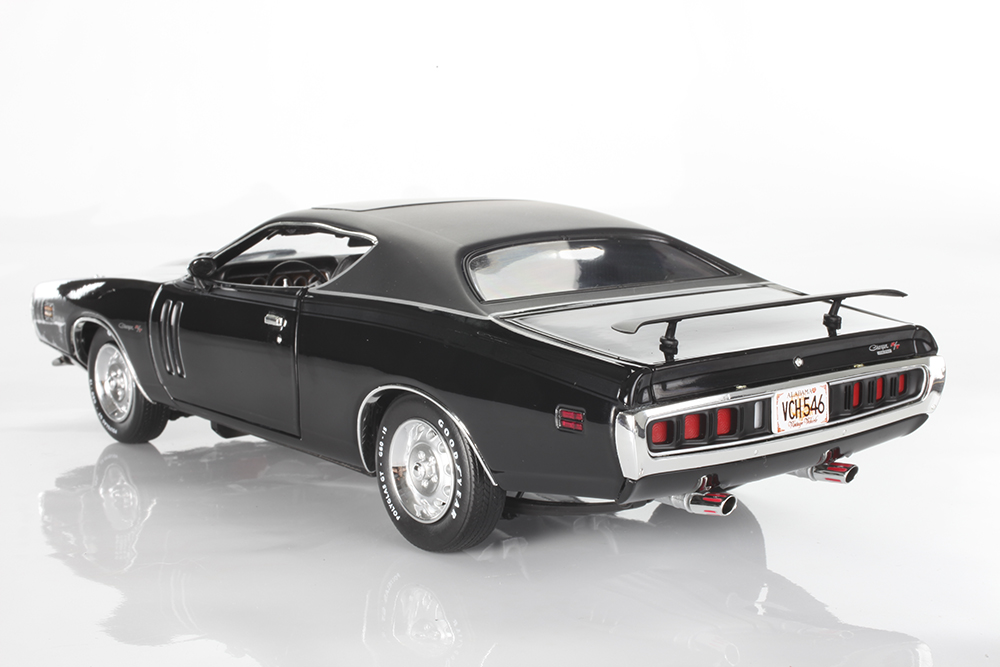 As with most of Auto World’s MCACN cars, the inspiration is intact and usually very well documented—which can be a blessing or a curse for a model manufacturer. A blessing in that the designers have a lot to work off of, and can even see it in person at the Wellborn Museum in Alabama. But it can be a curse in the sense that any deviations from the original will be easier to spot. Fortunately for collectors, no such discrepancies are evident on the exterior despite this car’s unique configuration. 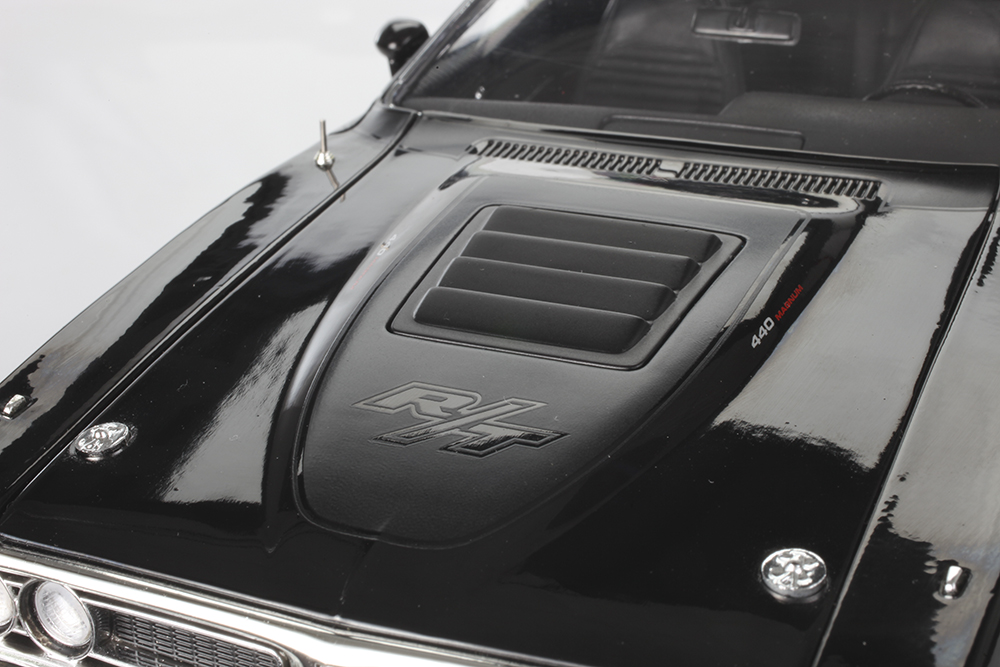 This particular car has a fixed-headlight grille and the J54 sport hood with louvers (rather than the ‘Ramcharger’ cold-air induction scoop) and ‘440 Magnum’ badging, and both optional spoilers—trunk and chin. As mentioned, the sunroof option required a vinyl top, and the paint on the body, striping, and simulated vinyl are all excellent. While the museum photos show the car wearing a set of Cragars, when it showed at the MCACN show in 2016 it wore the correct Rallye wheels with chrome trim rings, as the model has.

The interior is dressed to impress, starting with the hidden hinges in the doors. From there admire the molding on the dashboard and instrument cluster. The faux wood color looks right, the contours are great and I appreciate the opening glove box door. I also get a kick out of the monster tape deck/recorder in the space between the console and dash. 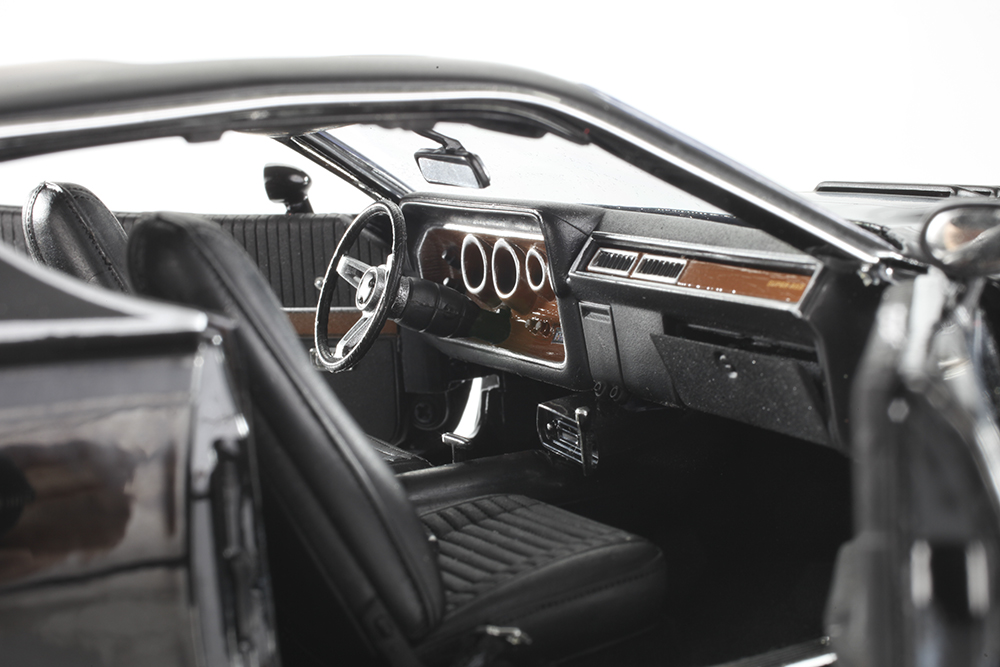 That was a seriously high-tech option the Charger offered in ’71! The Wellborn car doesn’t actually have one, but it’s a fun bit of creative license on the part of Auto World that I don’t mind at all. The car has the proper thickly-padded rim “Tuff Wheel” just like the real car, although the center button is slightly different. The only real obvious deviation from the original car concerns the gear selector. Auto World retooled the gear handle to reflect a console-shift TorqueFlite automatic, and it is very accurate—except that the Wellborn car has the less desirable shifter mounted on the column. The black vinyl bucket seats and metal rimmed pedals are excellent, and unless you’re comparing side by side with the museum car this interior is first-rate.

Hoisting that louvered hood reveals the advertised 4-barrel equipped 440 Magnum. This was the standard engine for the R/T, and with 370hp and 480 lb-ft on tap it was plenty potent. And unlike the optional Hemi and Six Pack engines, the Magnum was utterly unflappable and did not need fussy tuning! Even with the relatively tame 3.23 axle ratio that came standard with the TorqueFlite the 440 was a mid-14-second car; not bad for a car loaded with all the bells and whistles—including a sunroof! 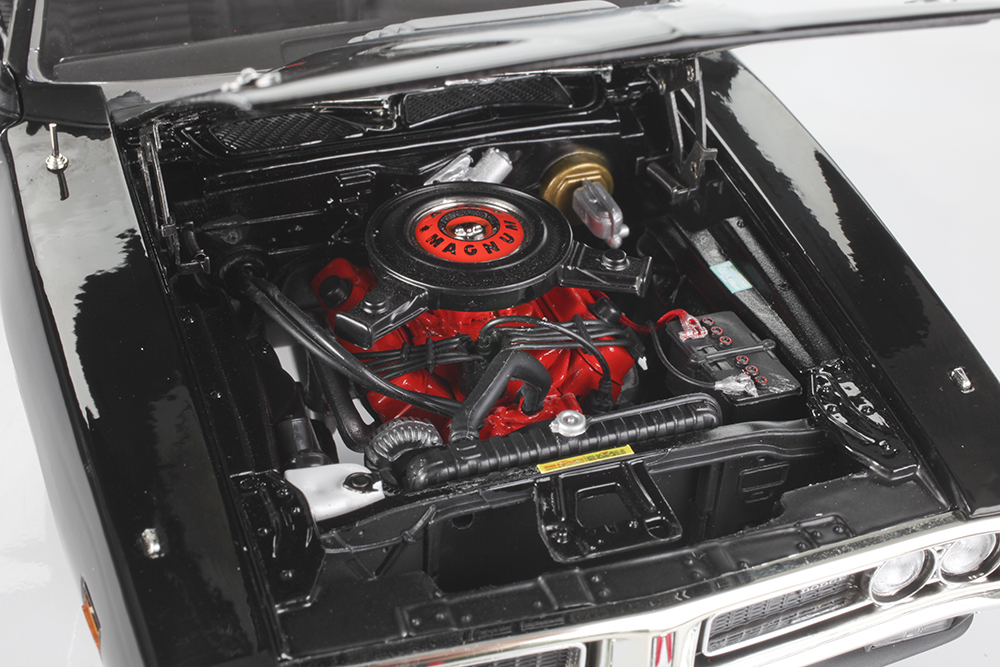 Auto World’s example looks fantastic—better than the original in a couple ways, because the museum car has aftermarket valve covers and air-cleaner assembly, but the model has factory-correct versions of both. There are wires, plumbing and warning labels throughout, showing once again Auto World’s knack for even the smallest details. One particular detail of note: the Wellborn car also has air-conditioning, which the model does not—really the only discrepancy on an otherwise stellar B-block presentation. 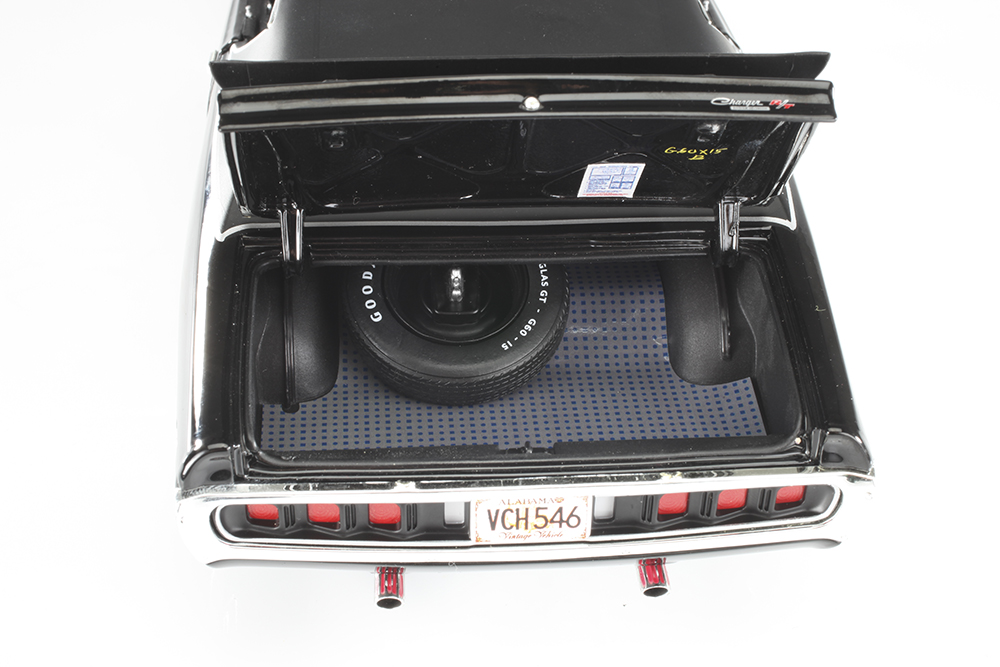 Chassis detail is another area where these Authentics castings shine, offering little extras like functional coil springs and a geared differential that allows the driveshaft to spin realistically with the wheels. Those wheels sit in fenders with nicely cast chrome trim in the arches, matching that around the window openings. The exhaust system is accurately molded and painted, and terminates in the stylish chrome turbine nozzle exhaust tips. 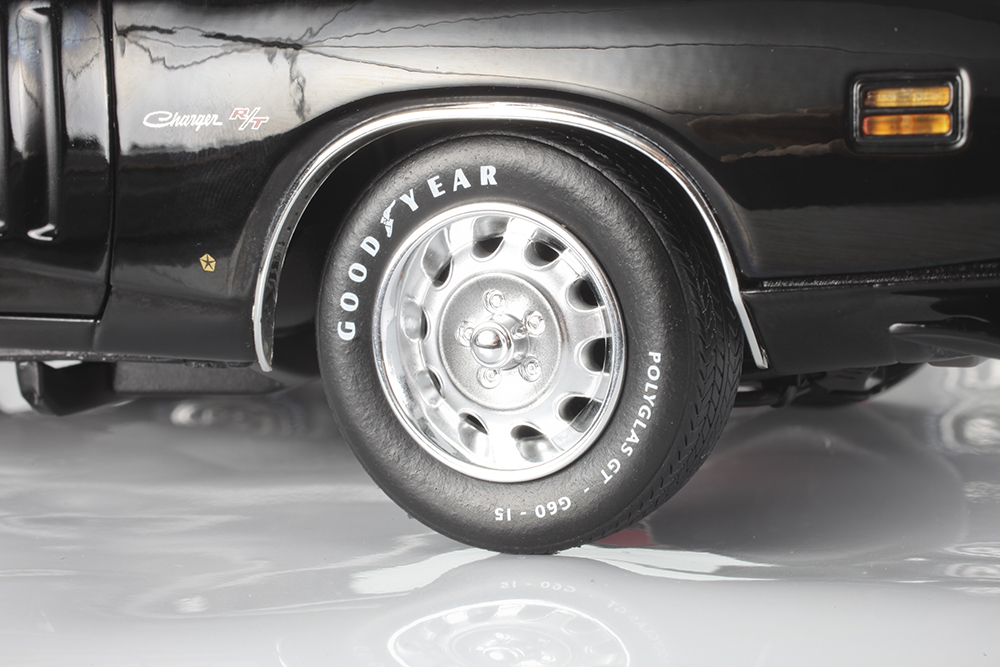 The wheels are nicely rendered examples of Dodge’s Rallye Wheel with argent-painted centers and a chrome trim ring. The tires are perhaps a touch narrow for the G60-15 raised-letter Goodyears that are depicted, but the tread is realistic and they give the Charger the proper stance.

The 1971 model represents the final hurrah for the Charger R/T, even as it introduced the sleek and sporty fuselage styling. The R/T package was discontinued for ’72, along with the Hemi engine option and much of the performance image that had defined the Charger since its introduction 6 years earlier. That makes the ’71 R/T uniquely appealing—the end of an era. Auto World’s model is appealing not only for its scale detail, but also because as a part of the MCACN series it is patterned after a specific real car. Yes, it differs from that original in a couple insignificant details, but the overall presentation is very convincing, and as a 1-of-30 sunroof-equipped R/T it represents something quite rare and special. It’s definitely worth adding you your muscle Mopar collection. 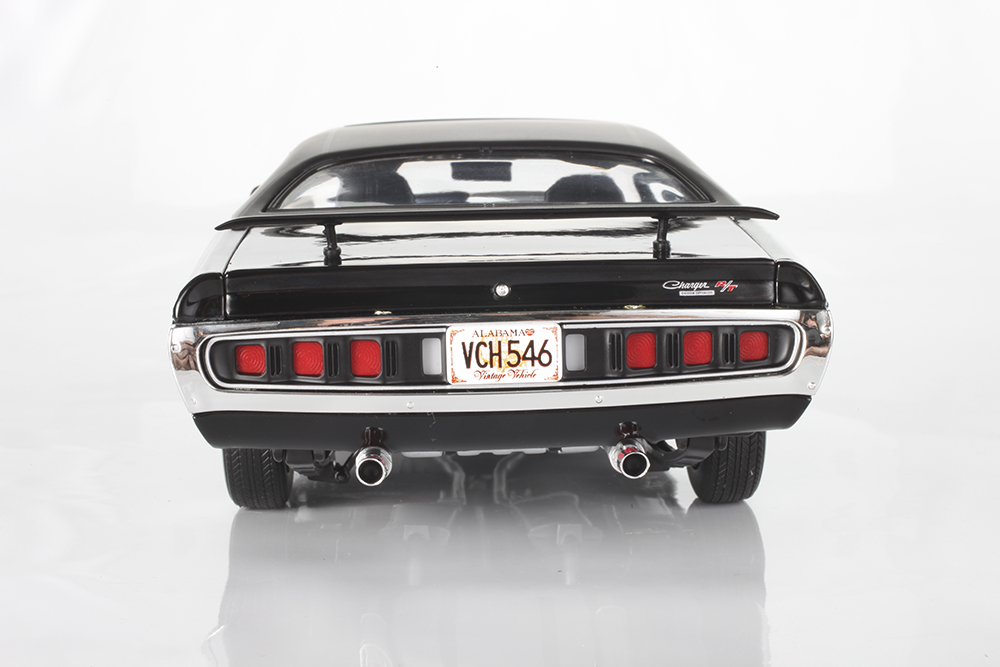