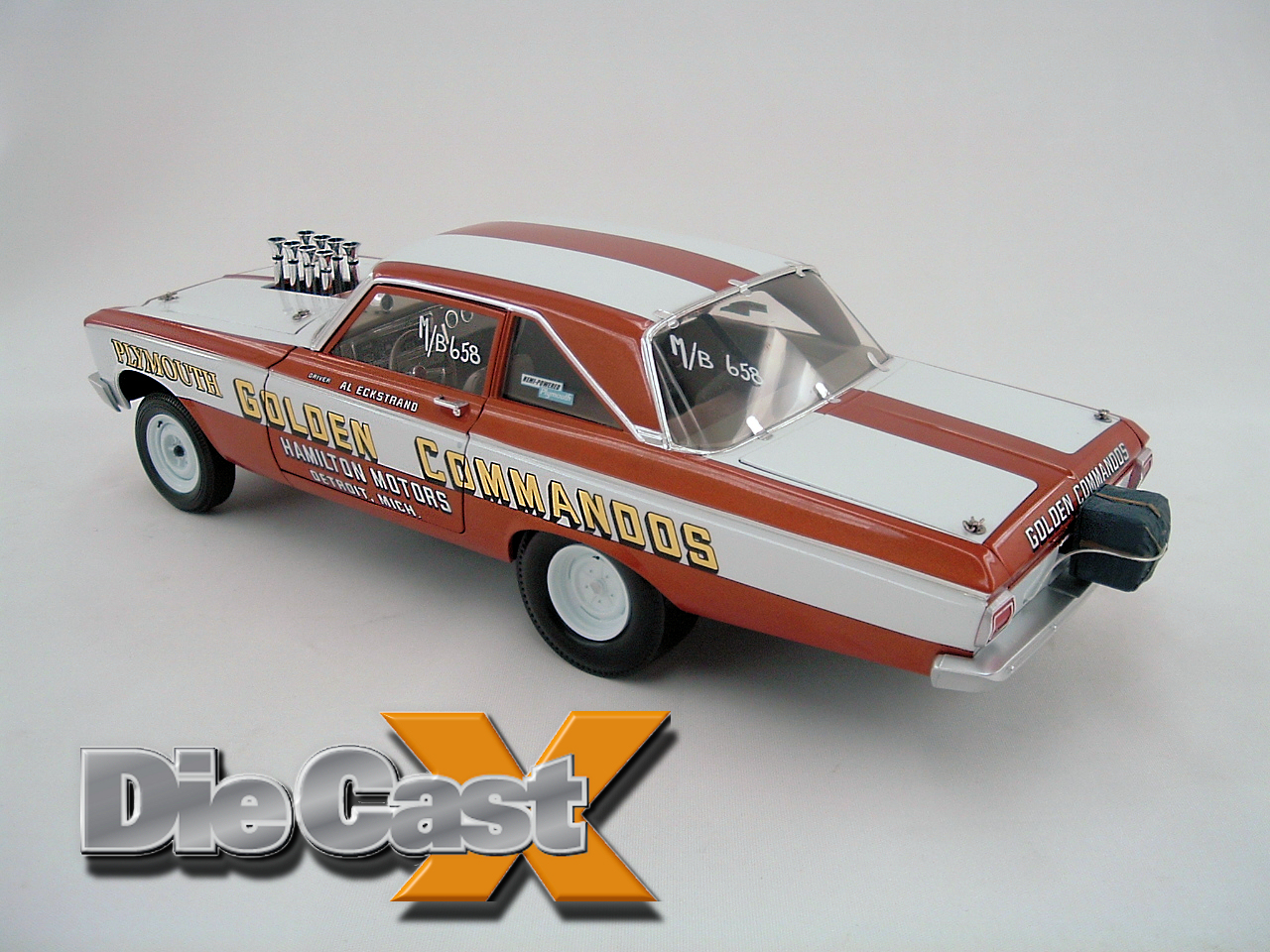 All good things really do have to end, and that’s the case with Supercar Collectibles’ successful lineup of 1:18 1965 Plymouth AWB – “Altered Wheel Base” – drag cars. This trio – a Sox & Martin car, and a brace of “Golden Commandos” machines, in injected and carbureted form – are new to the market, and will signal the final run for what has been a wildly well-received series. Also tipping its hood for good is Butch Leal’s injected “California Flash” (not pictured).

Made during the heyday of American drag racing, the real things were terrors, sporting carbureted (and later Hilborn-injected) Hemi engines and ultra lightweight, acid-dipped bodies. The cars’ most memorable (and visually compelling) modification, however, was a less-than-stealthy forward shifting of the front and rear axles – ten inches in front, and fifteen in the rear – in order to transfer the car’s weight during launch.

The trick worked – maybe too well. With more than fifty percent of the cars’ weight over those relocated slicks, AWBs had an unnatural advantage north of the burnout box, and these original “funny cars” – six Coronets, and six Belvederes – were soon banned from regular competition. That meant they were out of the running against the SOHC 427-powered Fords they’d been aimed at, and the situation forced drivers like Butch Leal,  Ronnie Sox, and Al Eckstrand to race each other, or the other “altereds” that suddenly started appearing at strips across the country. In carbureted form, the cars ran in the tens; when those Hilborn stacks were poking through the hood (tall stacks on auto trans-equipped cars, and short on the four-speed machines) the cars were capable of 140-plus mile-per-hour nines in the quarter mile.

Supercar took a real risk making these models, which were based on a stock wheelbase Highway 61 mold set. Once the research was done, major changes were worked out, including enhanced engine detail, a re-tooling of the chassis and body shell – and a whole lot of licensing deals with teams and owners. The models feature opening doors and removable, “pinned” hoods; opening trunks; working suspensions, rotating driveshafts, steerable wheels, and authentically wired and plumbed engines and chassis. The single-seat race interiors are neatly done up, and the models wear authentic paint and liveries under a slick clear coat. The details and assembly on the samples we’ve seen (and collected) have been top shelf, and the models (all of which are limited editions) are a lot of fun to poke around; add the fact that SCC routinely makes running changes – like the “blowout” retainers on the Golden Commando’s rear window, added on this run – and you’ve got a tantalizing avenue for drag aficionados to follow.

If you’re a dollars-and-cents collector, you might want to hear this: cars from the series have already seen a substantial appreciation on the secondary market; some of the first-run models are selling for multiples of the original $129.95 asking price. This last set of plum cars, carrying the Sox & Martin, “California Flash”, and “Golden Commando” tags, should do the same, if not better.

On the side of passion, well, I’m hoping this end may signal a new beginning for a maker very much in tune with the hobby. There are a lot of great ’60s mold sets out there crying for this treatment – and a lot of collectors (including this one) who would greet those cars with open arms.