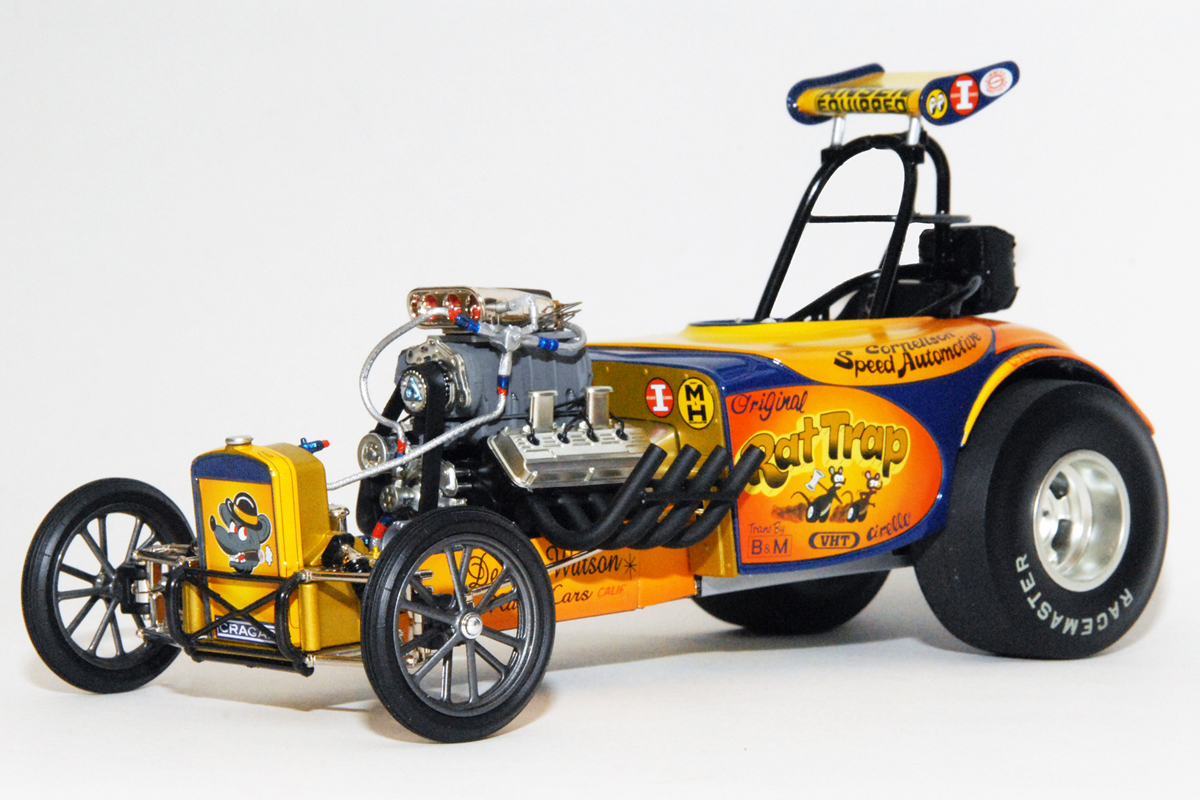 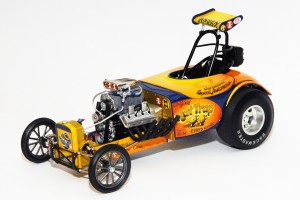 The 60’s and into the ’70’s were the “Golden Years of Drag” racing and back then nobody, not the dragsters or funny cars, could deliver the raw excitement like seeing two of the AA/Fuel Altereds go at it toe to toe !  Drag racing is dangerous and the top level drivers are all considered heroes, but above and beyond were “Wild Willie” Borsch, Sush Matsubara, Dale “The Snail” Emery, Leon Fitzgerald and the two Dans (Geiger and Collins) that drove “Rat Trap”.

Take a short wheelbase chassis, drop in a 6-71 blown and injected Chrysler Hemi or “Rat Motor” on fuel, top it with a Bantam, T-Bucket, or Fiat Topolino body, put one of these driving legends behind the wheel and you have a recipe for disaster !  These cars wanted to go every which way but straight !  And you were considered a lesser man among Altered pilots if you had to lift to get it under control.  Often the drivers didn’t get them straight until they popped the ‘chute.  Kinda’ like drifting in a straight line but with a lot more power and speed.  And the fans went nuts !

As Fuel Altereds faced extinction because they were considered just too dangerous, one of the last really innovative cars was Don Green’s “Rat Trap”.  Resplendent in yellow, orange and navy blue paint, “Rat Trap” was unique because of its double-A-arm independent front suspension.  Competitors chided Green for his unusual front suspension, but the teasing stopped after “Rat Trap” made their first few passes.

Acme has done a masterful job bringing us a 1:18 scale version of “Rat Trap”.  Everything on the car is beautifully executed.  The blown Chrysler Hemi engine could be sold as a model itself !  With polished aluminum valve covers, zoomie headers, Vertex magneto, a sandblasted-case 6-71 blower and a polished Enderle “Bugcatcher” injector, this engine looks ready to fire.  The ARE spoked wheels on the front and polished Halibrands mounting scuffed M&H Racemasters on the rear have just the right patina.  The orange, yellow and blue paint job with “Rat Trap” livery is just gorgeous.  There just isn’t anything that needs more attention on this car….. it’s perfect. 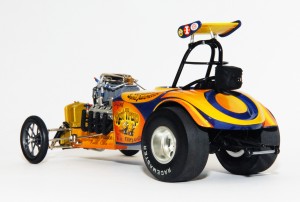