Prior to its demise as a car company a few years ago, Saab filled a strange position in the U.S. car market. The Swedish company’s styling and engineering were quirky and heavily influenced by the parent company Saab-Scania’s aerospace roots, but it was not so strange as to scare off mainstream auto buyers. The brand migrated upmarket over its lifespan; it was never quite a luxury brand or a performance brand, but it cultivated elements of both. A Saab was…a Saab. Truly there was nothing else quite like it.

Saab-Scania spun off the automotive division into a separate company in 1989 and sold a 50-percent share to General Motors. To help maintain profitability many of Saab’s earlier quirky features were gradually phased out in favor of items from GM corporate parts bin. In 2000 GM exercised its option to buy the remaining 50 percent of the company and it became a wholly-owned GM subsidiary. The brand continued to lose its quirky charm, and GM never really figured out how to market it. Saab was hit hard by the financial crisis in 2007-08 and with it continuing to lose market share GM eventually pulled the plug, bringing a sad end to a unique bit of automotive history. 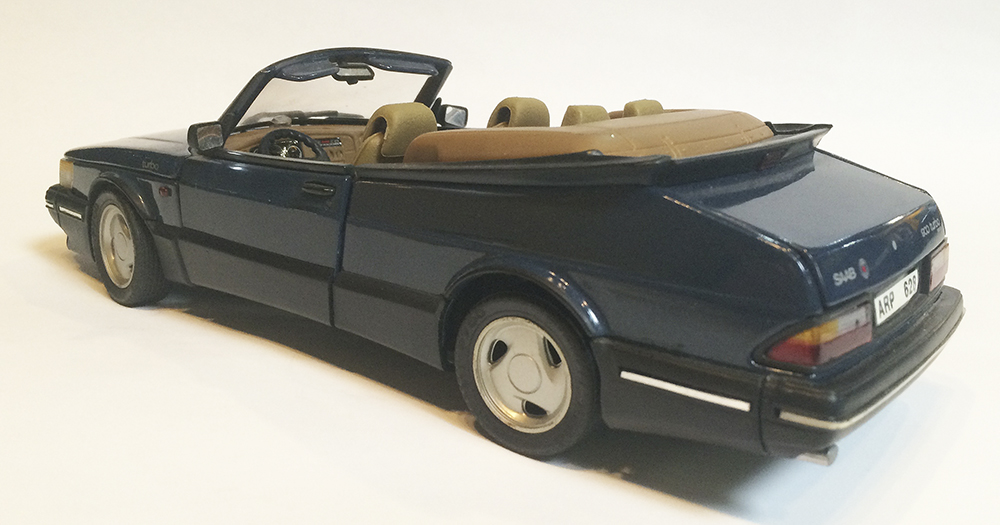 Among Saab’s most successful models, and one that has inspired a dedicated following that remains even today, was the first-generation 900. It debuted in 1979 and lasted until 1993, when it was replaced by a rounder model based on GM architecture. There was a convertible available starting with the 1987 model, which coincided with the model’s first facelift. As a niche brand, there aren’t a lot of models of Saab cars of any type or scale. Anson made a 900 Turbo Cabriolet in 1:18 scale—a drop top with the top permanently dropped. It is branded as a 1992 model, although changes were minimal from year to year so it could serve for other years as well. 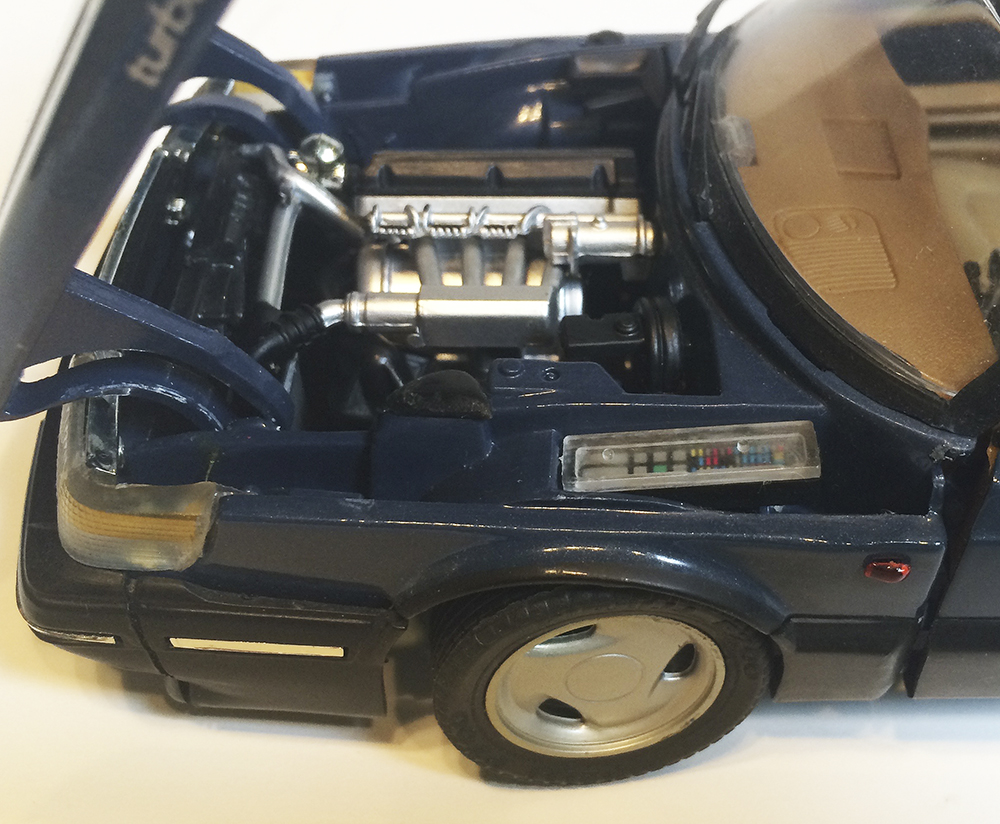 The front-hinged hood on this model replicates the multi-stage opening of the real car. It sort of lifts up, then scoots forward, and then drops down in front of the car. It’s kind of loose in function, but it achieves the overall effect well. The slant-4 engine (another bit of Saab weirdness that was actually originally designed by Triumph) features basic detail molded in black and silver parts. One neat detail is the fuse box located inside the front fender; it’s represented by a clear plastic piece covering the colorful fuses below. 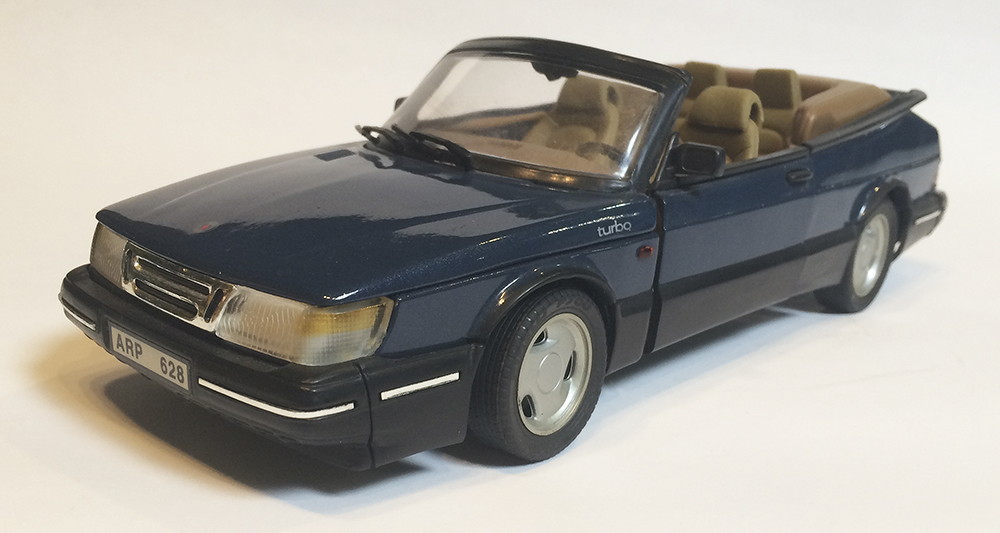 The exterior is finished in a dark blue-green metallic hue, on top, while the bottom replicates wide black plastic cladding—a dominant feature on many designs of the era. One nice exterior detail is the directional left and right side wheels. Most cars of that era with some sort of directional hubcap used the same thing on both sides, making it look backwards on one side. Saab did it right—and so did Anson. 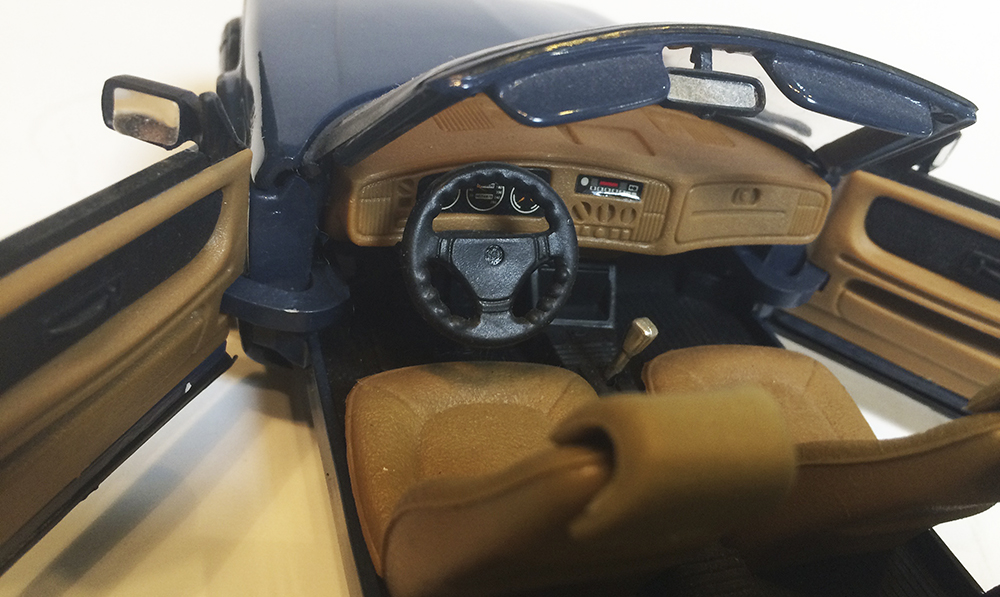 The interior is about what you’d expect from an entry-level piece. It features a couple shades of brown that look kind of odd together, but fits the quirkiness of the car. The Anson Saab 900 Turbo Cabriolet is a pretty basic, but also pretty inexpensive. If you have an odd-shaped hole in your collection, it just might fill that niche.

[Ron Ruelle is Social Media Guy at hobbyDB.com, a website about anything and everything collectible.]