We applaud any diecast company trying something new that gives more detail, value or originality to a product line. These days, with the norm being cost-cutting, consolidation, or brands disappearing altogether, its refreshing to see a company like Maisto innovating and finding ways to give collectors more. That’s the idea behind the Maisto Design series, the prototypes of which we first caught a glimpse of early this year at the New York Toy Fair. Production versions have now been released, and we got our hands on this Sublime 1969 Dodge Charger R/T. That’s not just an honorific—“Sublime” is the actual name of the paint color! Originally a 1970 factory color, it is a popular choice for custom Mopars like the one this model represents.

Maisto introduced a 1:18 stock Charger not too long ago, and that casting forms the basis of this model too. In fact, the whole Maisto Design series—which comprises multiple scales (from 1:64 up to 1:18) and genres from muscle cars to tuner cars to 4x4s—was conceived as a way to offer a broader range of appealing models using Maisto’s existing diecast tooling. 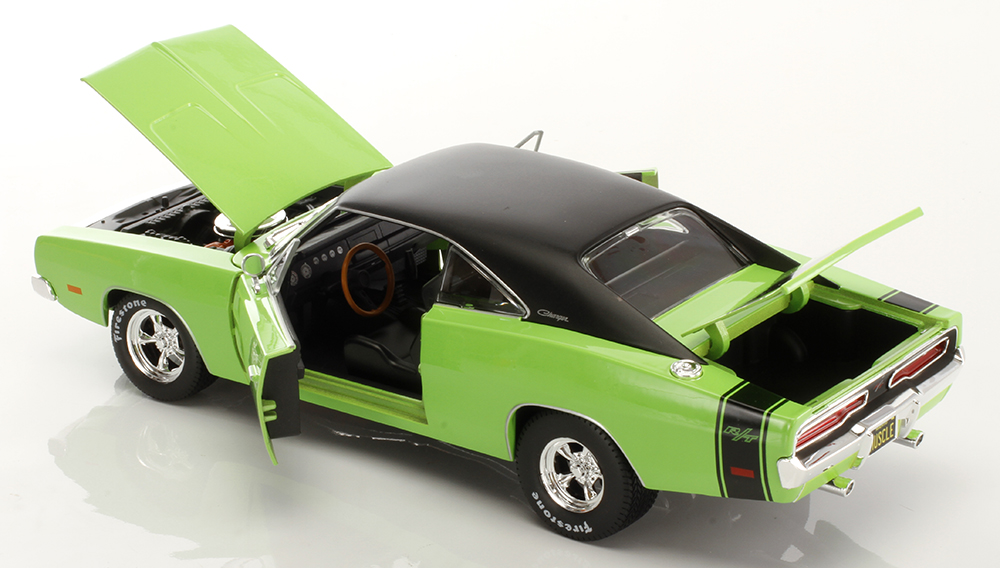 All the revisions to create this hot-rodded version are accomplished within the molded parts: interior, chassis, engine, and wheels and tires. By doing so it preserves one of Maisto’s crowning virtues: excellent detail per dollar value.

The Charger casting is pretty good too. In this era of alternative casting materials (resin, plastic), Maisto holds the line with a beefy metal body. Well, mostly metal. They chose to mold the vinyl-look roof panel out of plastic—we suspect not so much to save money as to allow easy conversion at a later date to a produce a Daytona variant with its flush rear window in place of this R/T’s recessed backlight and flying buttress C-pillars. We’re cool with that tradeoff. But why did they mold the windows with the rear triangle windows up? No one else does that with the Charger, as it interrupts the gorgeous hardtop lines that have made the ’60-70 Chargers such legends. 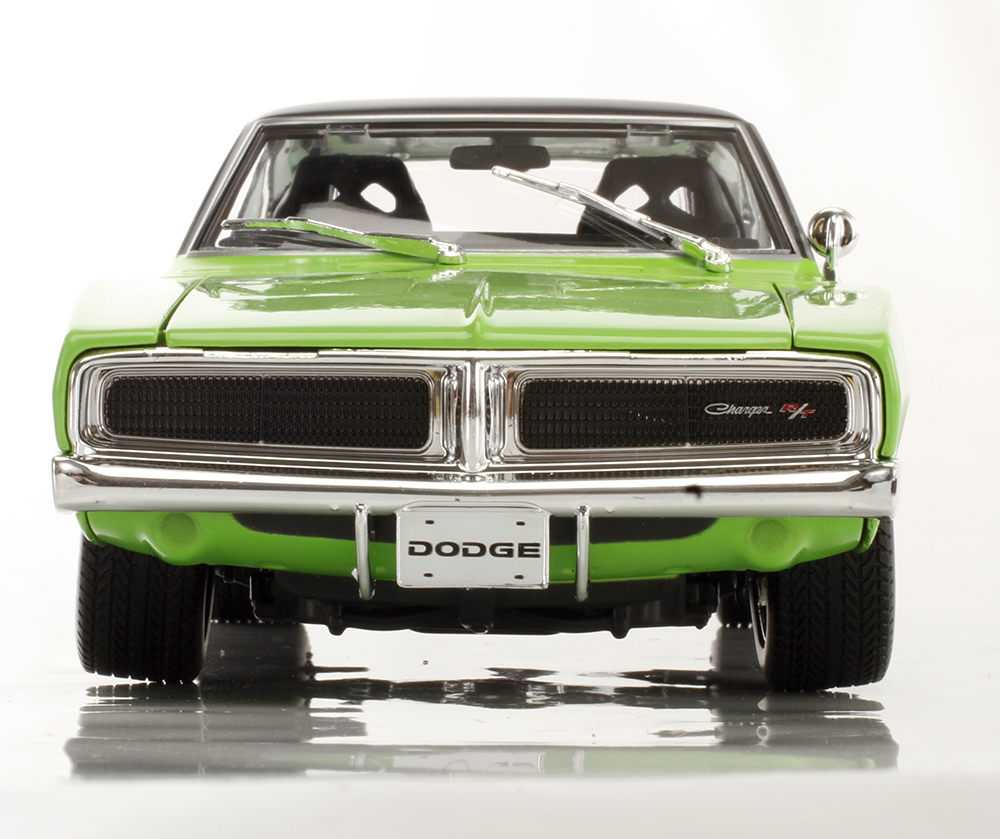 As expected, Maisto makes a few minor concessions to keep price low (painted window and wheel trim and signal lights for example) but since this car will retail for less than $40 that’s perfectly fine. (We’ve seen cars costing much more that do the same!) The important stuff—the split grille, rear valence, full exhaust, and that Charger quick-fill gas cap—are all separately molded out of chromed plastic with appropriate flat black paint in the grille. There’s even a carefully decorated “Charger R/T” script on the left side. And the look is finished off with a crisply painted “Bumblebee” R/T stripe on the tail. 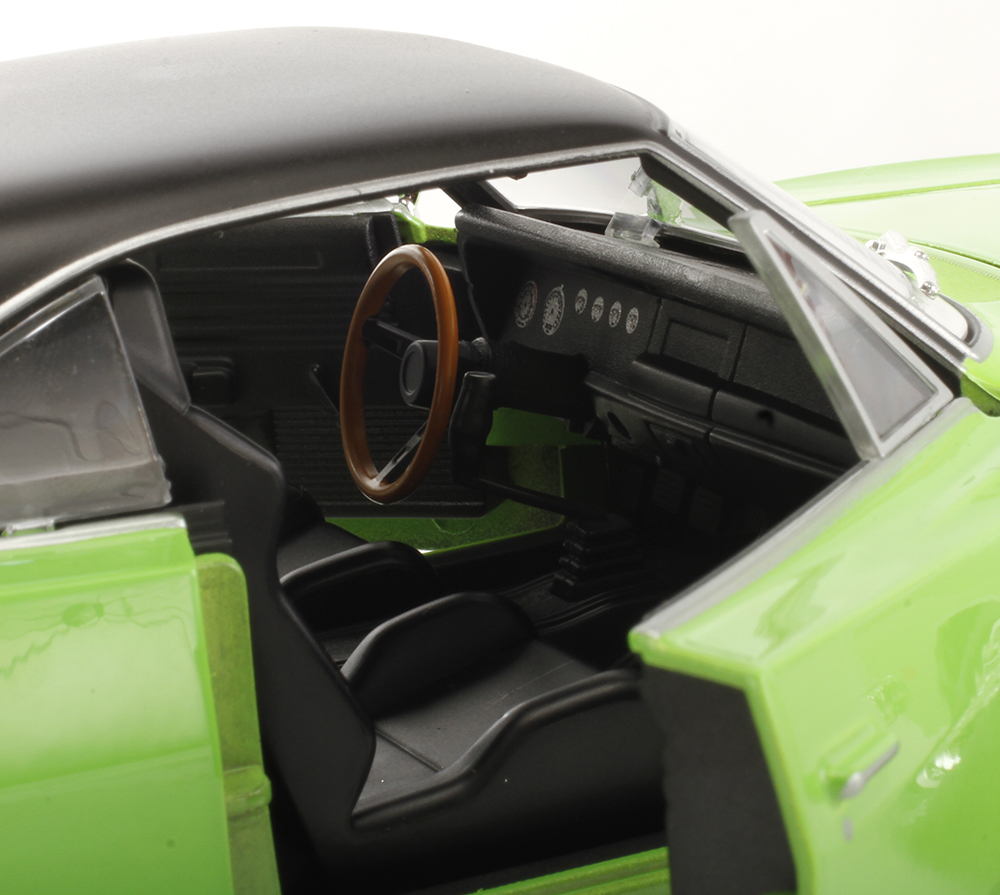 The doors have low-profile hidden hinges and close firmly. The interior features high-back modern sport seats with aggressive side bolsters—quite appropriate to a resto-mod street machine like this. There’s a tall shifter for the 4-speed sticking out of the center console with the Mopar signature pistol-grip handle, but oddly both the shaft and the handle are flat black with no paint highlights. In fact, that “murdered-out” motif carries through much of the interior, muting the texture of the wood-grain on the center console. The color is perfectly in keeping with the style of the car, but a few contrasting highlights—especially on that shifter—would help showcase what is actually quite proficient molding detail in the interior. 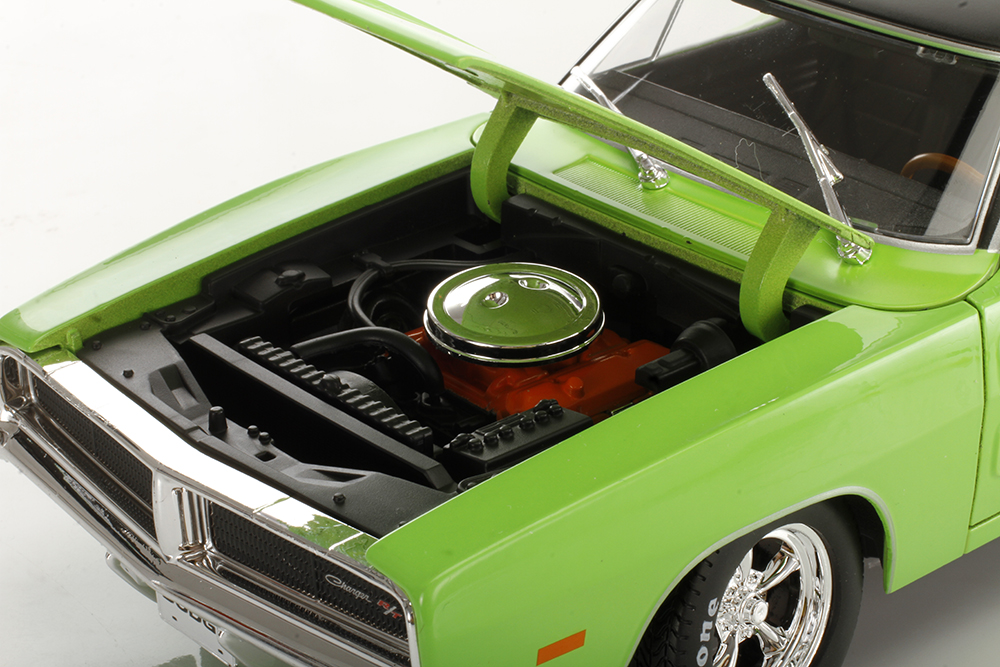 Popping the hood we see a respectable rendition of a Mopar B-block. Both the 383 and 440 Magnum share the same architecture (differing only in deck height) so without a decal on a stock air cleaner the engine could be either displacement. This car has a chrome street machine-style air cleaner so I’m going with the 440 because a car with this much attitude deserves the extra cubes! The engine itself is molded in the Mopar-appropriate orange and the valve covers have the correct bolt pattern and breather placement. The exhaust manifolds are chrome (as is the entire exhaust system) but retain the correct production shape. Other engine extras include radiator and heater hoses, and a separate accessory and fan assembly. There’s a pleasant amount of detail here—it just needs a bit more paint to pick it out.

The chassis is interesting. Detail here is solid too—but the suspension isn’t. By which we mean its not solidly molded—its fully sprung and functional! That’s something Maisto does a lot, and we cannot figure out how they can offer that feature at this price point, but we’ll take it! The rolling stock is completely unique to this car, and starts with chrome Torq-Thrust D lookalike wheels.  They’re wrapped in staggered radial soft rubber tires with “Firestone” stenciled on the sidewalls. To make sure the tires hold their shape under the weight of the car they are lower profile on the inside sidewall than the outside—a good solution that does not compromise the authentic look of the tire while still providing additional structure. 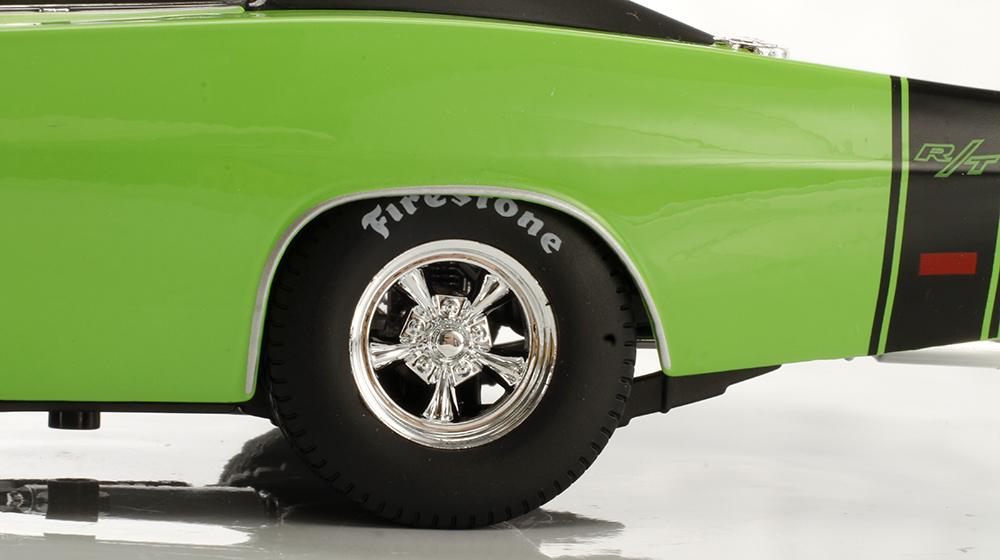 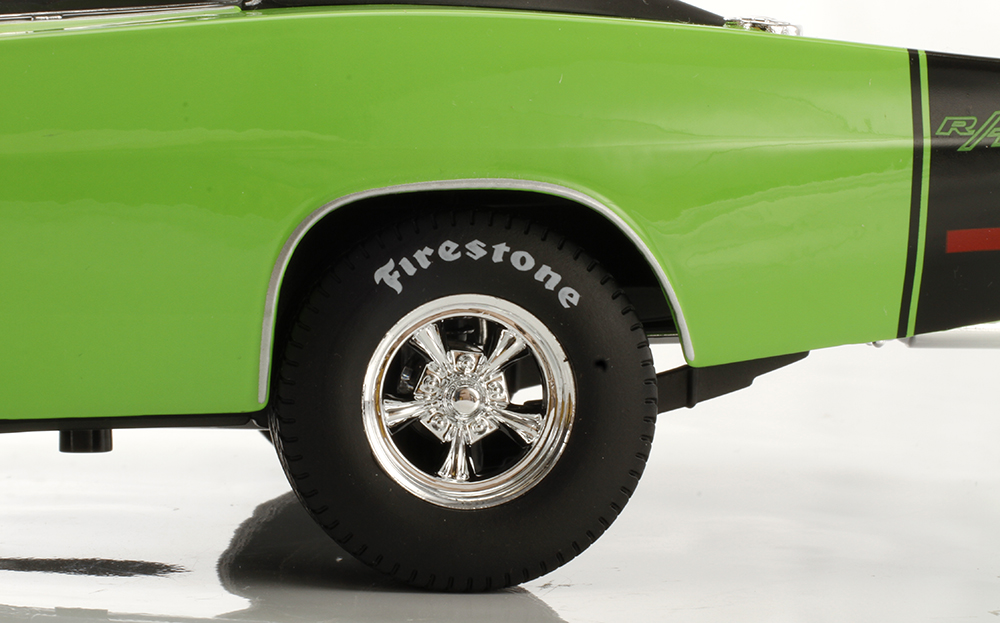 When we encounter a young collector getting into diecast, we often point them to Maisto as a good bang-for-buck brand. With the Maisto Design series the company now has a new high-value option in the restomod category. This Charger has a ton of visual appeal and a character distinct from the stock version. We’d love to see a few more paint highlights—something Maisto does quite proficiently with many other models—applied here, but even as-is this car offers a lot of content for not a lot of money. Every collector needs at least one ’69 Dodge Charger in their collection. This would be a great one to start with.