The Swan Song for a Sporty Swede

Here’s a model we just received in the office this week, and it’s the very first we’ve seen from new diecast company on the scene. How often do we get to say that? They’re called DNA Collectibles and they’re out of Switzerland. They do sealed resin-cast models in 1:43 and 1:18. So far they’ve tended to focus on—logically enough—European makes, and on models from the last 25 years or so. This genre is becoming more common in diecast as the next generation of collectors starts waxing nostalgic for the cars they grew up admiring. 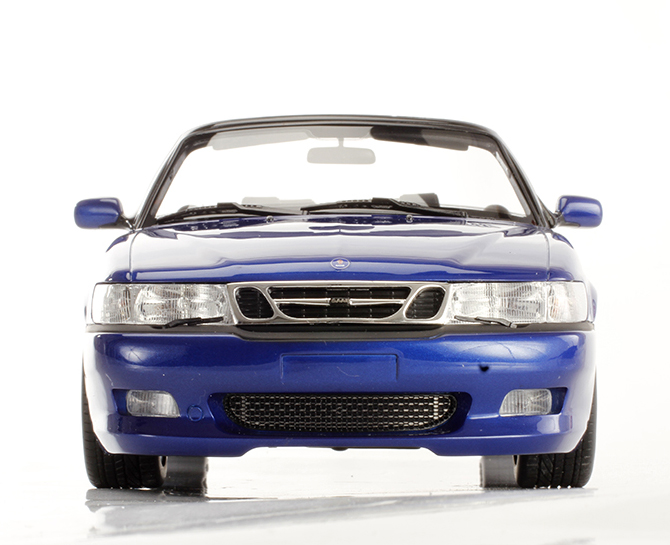 What we have here is the Saab 9-3 Viggen—considered by many to be the last true Saab—before GM took over (and eventually smothered the brand!) It was in production from 1999 through 2002 and at the time the Viggen was considered something of a throwback—its 5-door hatch body and raucus turbocharged 4-cylinder driving the front wheels was considered less sophisticated than many of its competition. It was a legitimate performer though—its 230 horsepower and boatload of turbo torque was enough to keep pace with any of the slick German or Japanese class competition. Ironically, the years have shown the 9-3 was perhaps ahead of its time, as many of those competing brands have come back around to turbocharged 4-cylinder power, and fun front-wheel-drive factory special hot hatches like the VW GTI, Ford Focus ST, and new Honda Civic Type R definitely follow in the Viggen’s footsteps. 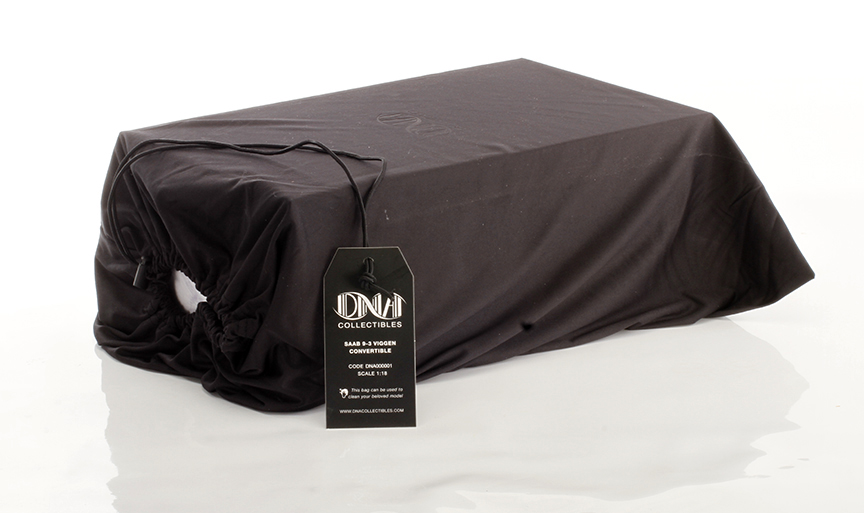 This is the first model from DNA I’ve examined in person, and from the outset the packaging is quirky but classy and very practical—kinda like the Viggen! It comes in a slick draw-string bag to protect the inner box, which is nice but rather nondescript. Inside that you might be expecting a decorated inner box, but nope! Instead is just foam surrounding the model itself. This is the convertible version of the Viggen—not the hatchback bodystyle the car was introduced as.

This is welcome for two reasons. First, the two-door droptop more stylish than the slightly hunchbacked 5-door, and second it affords a much better look at the model’s interior! It presents one packaging difficulty though. The car is delivered with an optional convertible up-top panel secured on the body with plastic tie-down straps and centered with two tiny tabs on the bottom rear edge of the panel. The top on our sample shifted during shipping, breaking off one of the centering tabs and allowing the top to rattle around in the box. Its a minor issue and an easy fix, and luckily it caused no damage to the model itself. We’d suggest DNA would be wise to ship future convertibles with the roof panel removed and secured in a side compartment in the box. Most collectors won’t end up using it—the Viggen is much more handsome with the top down—but its nice that they included the option. While we’re discussing packaging, note that DNA delivers the car mounted on a clear acrylic base. Its cool looking, but to protect it they wrap the whole thing in a cling wrap so you actually have to remove the car from the base to get the wrap off—not super practical.

Packaging issues aside, the model itself is gorgeous. A word about the color: its called Lightning Blue and among Saab enthusiasts it is highly prized. It was only offered on Viggen convertibles for a single model year—2000—and just 47 examples were imported to the US, making it as rare as it is appealing. DNA does an exemplary job with it; it has just the finest hint of a metallic sheen.  Surface detail is excellent, with good light lenses. Badging is accomplished with decals below the clearcoat, and they are accurately rendered. 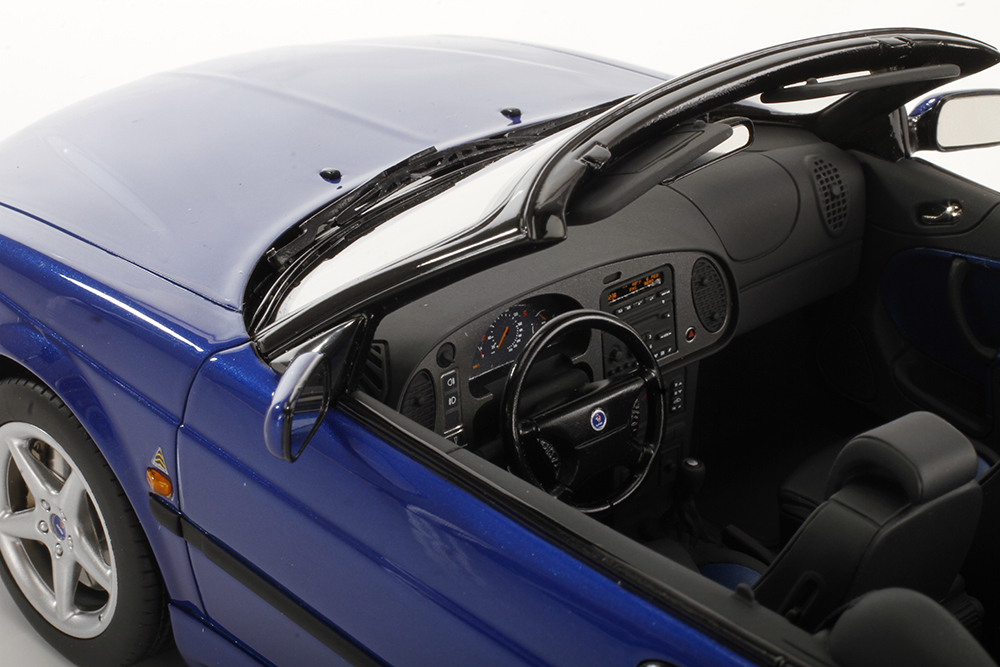 The interior is where we get most of the bonus detail, and with the top removed you can get right down in there with plenty of light to see everything the model has to offer. I like the two-tone matte black and satin blue upholstery. The dashboard is especially well-executed. All the buttons on the center stack are meticulously picked out with paint highlights, the contrasting face of the dash panel is very convincing, and there is excellent detail on the instruments. 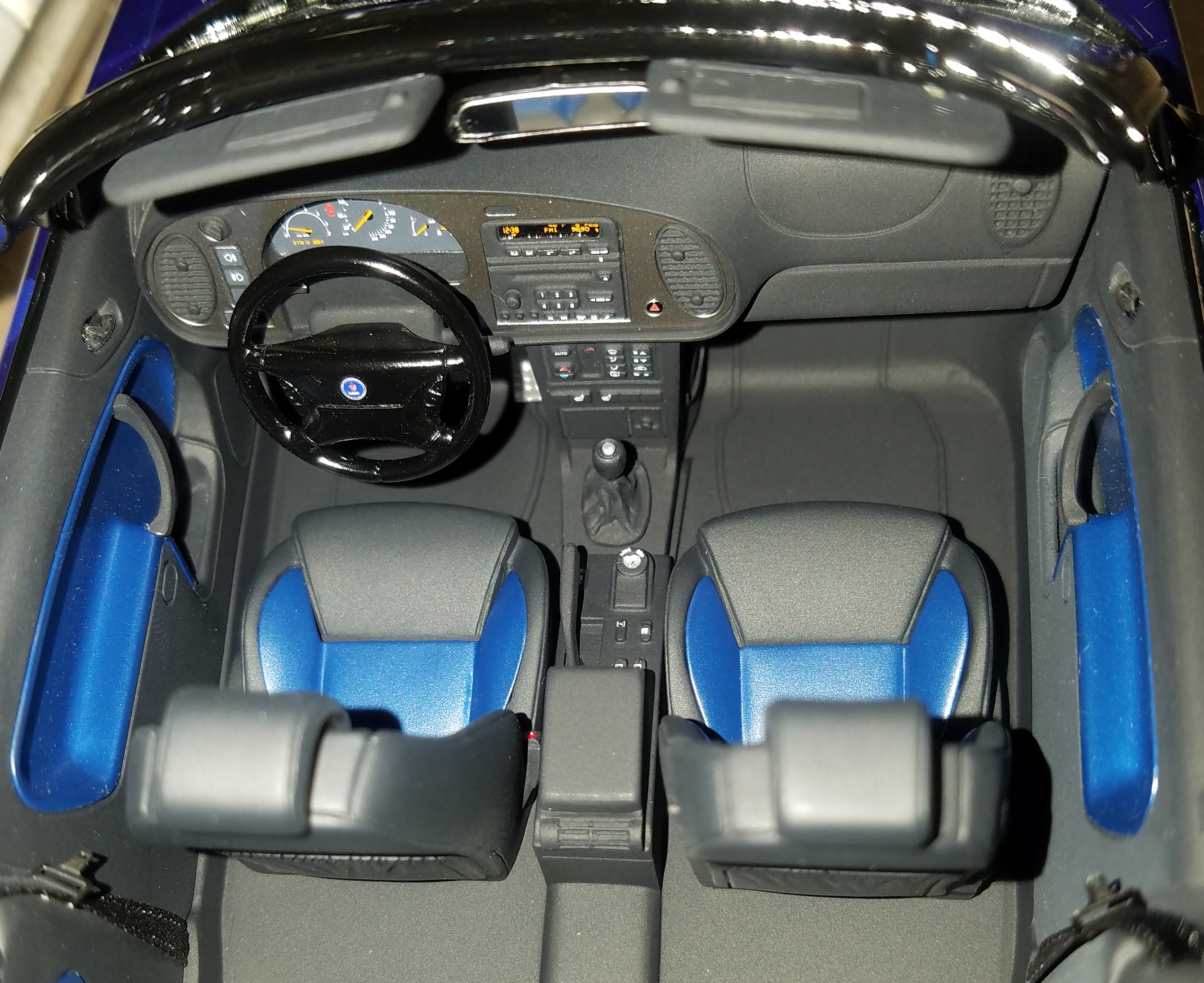 Note the center console area; bracketed by the gear shift and e-brake handle (both are good) is one of Saab’s signature quirks—the console-mounted ignition key switch! 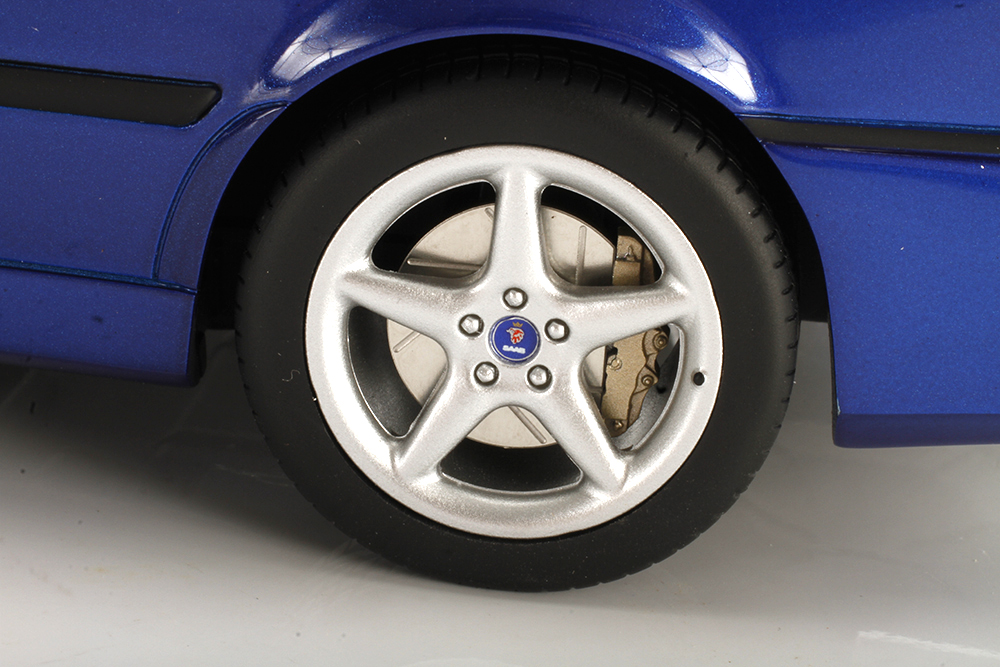 Since this is a sealed-body resin model we don’t get to see the rowdy little four-banger that gives the Viggen its character and performance. At the time its 230hp and 252 lb-ft of torque were exceptional, and hold up well even today. But the Viggen wasn’t just a motor—it received upgraded suspension, brakes, and rolling stock as well. The latter two are in evidence on DNA’s model. The chunky 5-spoke wheels are well molded and have Saab logos on their center caps, and the tires have good tread and contours. The brake calipers and slotted rotors are visible through the spokes; their detail is decent but not quite up to the level of the rest of the package. 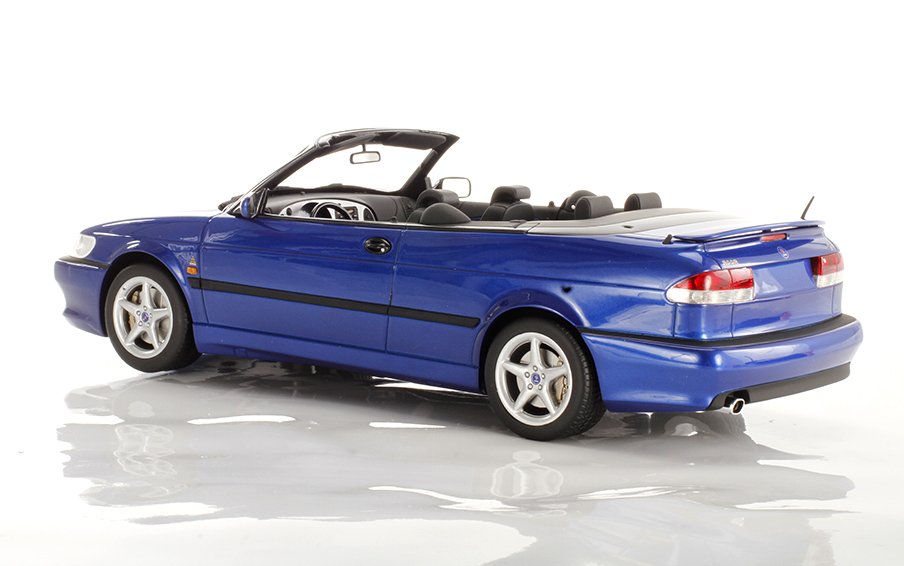 The Viggen is slightly odd looking, but undeniably handsome and quintessentially Saab! Saab notably also built (and still does!) jet fighter aircraft, and the Viggen was inspired by—and even named after—one of the company’s jets. The name reportedly translates to “Thunderbolt” (although I confess Google Translate couldn’t confirm that for me!) Its appropriate though—especially when you dump the clutch on the Viggen’s turbo-4 and wrestle the torque-steer while it launches you like a jet down a runway! If this model is representative, look for DNA to be an up-an-coming powerhouse  in the resin-cast model space in in coming months. A couple minor packaging snags aside, this is a very successful early effort by a very promising brand. We like the choice of subject and we admire the faithful execution of Saab’s last great model.